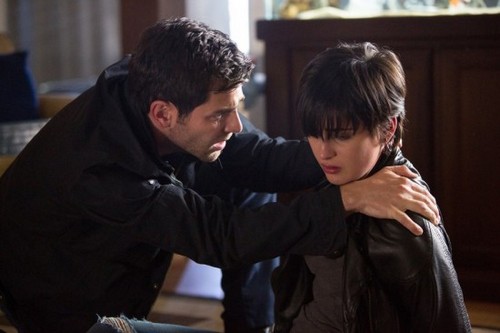 Grimm returns to NBC tonight with a brand new Friday October 31, season 4 episode 2. In “Octopus Head,” Nick ponders whether he wants his Grimm abilities back as he and Hank continue to track a Wesen that’s stealing memories from its victims. Meanwhile, Adalind learns she has a connection to Nick; and a recovering Capt. Renard has a mysterious visitor.

On the last episode after the events at Monroe (Silas Weir Mitchell) and Rosalee’s (Bree Turner) wedding, Nick (David Giuntoli) was faced with losing his identity as a Grimm. Hank (Russell Hornsby) and Juliette (Bitsie Tulloch) joined Nick as they tried to figure out how to deal with Trubel (guest star Jacqueline Toboni) as she faced the consequences of a heinous murder she committed. Meanwhile, when Wu (Reggie Lee) arrived at the scene, his discoveries brought back images of his traumatic encounter. A new threat arrived in Portland to steal the memories of its victims, leaving them in a state of dementia. Elsewhere, Captain Renard’s (Sasha Roiz) life hanged in the balance and Adalind (Claire Coffee) fell into Prince Viktor’s (guest star Alexis Denisof) trap as she desperately searched for her baby. Did you watch last season’s finale episode? If you missed it we have a full and detailed recap, right here for you.

On tonight’s episode as Nick (David Giuntoli) and Hank (Russell Hornsby) turn their attention to a string of attacks where victims are left without their memories, Nick weighs whether or not he should regain his Grimm abilities. Trubel (guest star Jacqueline Toboni) joins the investigation and puts herself in harms way. ?In Vienna, Adalind (Claire Coffee) is being held captive and learns that she is more connected than ever to Nick. Meanwhile, Captain Renard (Sasha Roiz) continues to fight for his life as a mysterious visitor (guest star Louise Lombard) arrives to help him.

Don’t forget to come back here tonight at 9 PM EST for our recap. In the meantime, hit up the comments section below and let us know what you’re most looking forward to in tonight’s season 4 episode 2.

A mysterious witch has arrived in town on tonight’s episode of Grimm and rather than use her magic for evil (as we’ve come to expect with the likes of Adalind and her mother) this witch chose instead to save Captain Renard’s life. And as for Renard’s late lady love Adalind, she finally arrived back in Vienna however all of her scheming has not gotten her what wanted. She thought that when she took Nick’s powers she would then get her daughter Diana back. But Viktor had lied to her. He never had her daughter and by putting herself in his clutches – Adalind wound up imprisoned miles away from both her child and her lover.

Meanwhile back in Portland, Trubel is still in pursuit of the Wesen that could steal peoples’ memories. Although working Hank and Nick has somewhat hampered her style. They want to take down their culprit legally and Trubel just doesn’t see the point. She’s a Grimm and the Wesen has proven to be dangerous so she knows what should be done but simply can’t do it with Nick and Hank holding her back.

And that could end up costing someone else their life. The Wesen was sent to their city because of a mission and he’s not done with the job quite yet. So while Hank and Nick are back at the office looking through files – it’s Trubel that’s following the Wesen around town and noticing his suspicious behavior live and in action.

She called Hank and told him what she was doing and he told her to try keeping her distance as much as possible. He didn’t want her to alert the Wesen to her position in case she got into too much trouble she couldn’t handle alone.

But the Wesen isn’t the one she should be afraid of.  Captain Wu has been looking into Trubel. He had found her book of Wesen creatures back at Nick’s house so he knows now that what he thought was his former “delusions” might have been real.  His reasoning is that if other people can see it then he can’t be crazy!

Humans in general can’t handle seeing Wesen in their true form so Wu went off the bend the last time that happened. And his friends allowed him to spend some time in the psych ward.

Nick and Hank had had the power to tell Wu all about the creature he saw and they hadn’t taken the opportunity. Though they soon might be forced into changing their stance on the matter. Nick can no longer see Wesens and frankly he’s like any other human now. Meaning he’s just as vulnerable as so is everyone around him.

The feds are still investigating the death of one of their own and there’s another Wesen in their ranks. And Agent Chavez could very well be a threat. She’s close enough to spy on the guys and because of the investigation she could get dangerously close to Renard as well.

Though she’s going to have to go through his mother if she ever wants a chance at the captain. The witch that saved his life was in fact someone he calls mother. Hence, this time Nick and his friends know for sure they have a witch on their side! As you can recall, Adalind didn’t really pan out in the end and to this day she’s continuing to cause problems.

Apparently when she took Nick’s powers, she created a link between them. She hasn’t used her powers do much but so far she has exerted herself into taking over Nick’s sight.

As for Trubel, she got the chance to take down the Wesen and her little Die Hard stunt almost cost her her memories. Thankfully, Nick and Hank showed up to save her before any lasting damage could be done but the guys were later nowhere to be found when she was snatched right off the street.

It seems Trubel might be the first victim of Agent Chavez. The woman wanted to focus on finding the Grimm first and she unfortunately found the only remaining one in town!