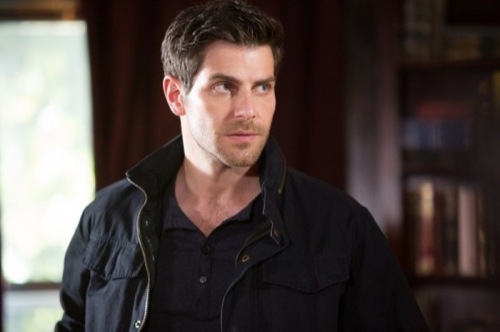 Grimm returns to NBC tonight with a brand new Friday October 24, season 4 episode 1 premiere episode. In “Thanks for the Memories,” Nick [David Guintoli] adjusts to the loss of his Grimm powers and tries to figure out how to deal with Trubel as the fourth season opens. Meanwhile, Wu has an unpleasant flashback; a new group of Wesen come to Portland and steal people’s memories; Capt. Renard fights for his life; and Adalind’s desperation to find her child lands her in Prince Viktor’s clutches.

On the last episode it was Monroe (Silas Weir Mitchell) and Rosalee’s (Bree Turner) big day and their joy would only be matched by unexpected heartache for those around them. Nick (David Giuntoli) and Juliette (Bitsie Tulloch) made a startling realization that could shake their relationship to its core. Meanwhile, Adalind (Claire Coffee) proceeded with a delicately laid plan that lead to a catastrophic event that will alter the course of Nick’s journey. Did you watch last season’s finale episode? If you missed it we have a full and detailed recap, right here for you.

On tonight’s episode after the events at Monroe (Silas Weir Mitchell) and Rosalee’s (Bree Turner) wedding, Nick (David Giuntoli) is faced with losing his identity as a Grimm. Hank (Russell Hornsby) and Juliette (Bitsie Tulloch) join Nick as they try to figure out how to deal with Trubel (guest star Jacqueline Toboni) as she faces the consequences of a heinous murder she committed. Meanwhile, when Wu (Reggie Lee) arrives at the scene, his discoveries bring back images of his traumatic encounter. A new threat arrives in Portland to steal the memories of its victims, leaving them in a state of dementia. Elsewhere, Captain Renard’s (Sasha Roiz) life hangs in the balance and Adalind (Claire Coffee) falls into Prince Viktor’s (guest star Alexis Denisof) trap as she desperately searches for her baby.

Don’t forget to come back here tonight at 9 PM EST for our recap. In the meantime, hit up the comments section below and let us know what you’re most looking forward to in tonight’s season 4 premiere episode.

On tonight’s premiere of Grimm, Trubel has well found herself in a bit of trouble. What she thought was a mere wessen also happened to be a federal agent. Hence killing him is going to have some repercussions for her even if the feds accept her excuse that it was self-defense.

The fact she beheaded her would be attacker with a readily available machete is also upsetting the narrative of her story. Like why would anyone have machete just sitting in the chair bedside her bed? That’s a bit unusual for anyone and Trubel is going to have to come up with a credible story to answer for that. And so far all she got is that the weapon belonged to Nick.

Nick and Juliette for that matter are still reeling from earlier events with Adalind so it took everyone’s best effort to keep their composure under such measures. Luckily Trubel was able to keep to her story and as long as she remains consistent – the feds have no legal grounds to hold her. So eventually she was allowed to leave their oh so loving care and return home with Nick.

But home isn’t the same after the shooting. The Captain’s blood is everywhere and it feels a tad overwhelming for Juliette who had stayed behind while the rest of them went to the precinct with Trubel. So it came as blessing when Monroe and Rosalee decided to bench their honeymoon and soon joined Juliette at the house. It was sad they missed out on a vacation from the madness but truthfully they really were needed at home.

Life as everyone knows it was about to change!

Nick still doesn’t have his Grimm powers and the one person that could help was in the hospital. And the Captain’s prognosis wasn’t looking too good. Renard was losing too much blood so the doctors warned his officers to contact his family. It was possible he wouldn’t live out the night.

And without the Captain, neither Nick nor his friends would know what was in the potion Nick was supposed to take. Though Rosalee, after hearing about the whole Adalind sleeping with Nick thing, did come up with a possibility for what happened to Nick’s powers. So she and her new husband were going to be at the tea shop looking for answers and hopefully find a cure.

Yet, while that happens, Trubel has been warned about being extra careful. Until what happened to Nick is reversed; she’s the only Grimm in town. That means that she’s both in danger at all times and can still be of use.

Which is good because Nick and Hank have a new case and they need Trubel with them seeing as they believe a Wessen was involved. A couple was attacked. The boyfriend’s memory was wiped clean and his girlfriend who had planned on surprising him by coming home early was murdered.

Now there’s only one kind of Wessen that clean out someone’s memory like they’re attacker did to their victim so they asked Trubel to come in identify their suspect. She pretended to be a mugger and that got the killer so riled up – he revealed his true face.

She escaped without revealing her identity as well, but then there was a problem of who would get to go after their killer. There’s no evidence to tie him to the crime and Nick can’t go all Grimm on him. So that left Trubel. Do Hank and Nick allow Trubel to take down the Wessen?

And what about Renard. The officers that have worked alongside for years didn’t know a thing about him and those that did get to know him on a personal level – still weren’t around when he flat-lined. Frankly, the only person that showed up when Renard was dying was a mystery woman.

All we know about her so far is that she’s a Hexenbiest.