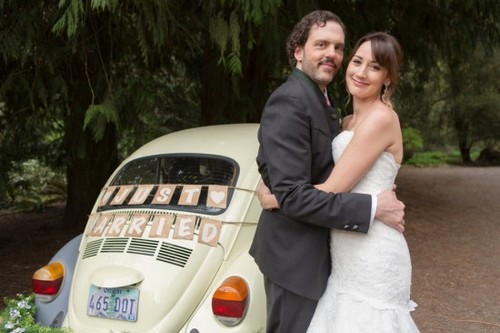 GRIMM returns to NBC tonight at 9PM EST with a brand new episode. In “Blond Ambition”, the third season ends with the arrival of Monroe and Rosalee’s wedding day. Meanwhile, Nick and Juliette come to a surprising realization that could have lasting effects on their relationship; and Adalind’s actions have disastrous consequences.

On last week’s episode a mysterious duo came to Portlan in search of Nick – C. Thomas Howell and Jacqueline Toboni guest starred — Nick (David Giuntoli) and Hank (Russell Hornsby) were called to investigate a double homicide, and quickly learned the victims were from a special section of the Verrat tasked with finding rare objects pertaining to the Wesen world. Trubel (guest starred Jacqueline Toboni) got involved with a mysterious father-and-son tandem that crossed the country in a desperate attempt to deliver invaluable cargo to “the Portland Grimm.” Meanwhile, Captain Renard (Sasha Roiz) began to grow suspicious of Adalind’s (Claire Coffee) recent behavior and quietly decided to put extra eyes on her. Bitsie Tulloch, Silas Weir Mitchell, Reggie Lee and Bree Turner also starred. Did you watch last week’s episode?  If you missed it we have a full and detailed recap, right here for you.

On tonight’s episode it’s Monroe (Silas Weir Mitchell) and Rosalee’s (Bree Turner) big day and their joy will only be matched by unexpected heartache for those around them. Nick (David Giuntoli) and Juliette (Bitsie Tulloch) make a startling realization that could shake their relationship to its core. Meanwhile, Adalind (Claire Coffee) proceeds with a delicately laid plan that leads to a catastrophic event that will alter the course of Nick’s journey. Russell Hornsby, Sasha Roiz and Reggie Lee also star.

The lead up to the wedding is honestly turning out to be more peaceful than anyone had suspected it would be. Take for example, no one is yelling or guilt-tripping either the intended bride or groom. So it’s a vast improvement from when the happy couple announced their engagement.

However a problem lurks on the horizon. And shockingly it’s not in the form of Adalind (per se). Last week the Hexenbiest actually concoct a spell to transform herself into Juliette whenever needed so if anyone is going to be blamed for what happens next then sorry, but it’s going to be Juliette.

Adalind was commissioned by the Royal Family to make Nick’s life a living hell. Yet the first stop she made after “transitioning” was to Renard’s. She wanted to mess with his head and did a good job of making him believe that Juliette still has feelings for him. Then when she was done with him – she contacted Juliette. She said she wanted to warn the other woman about Renard possibly having feelings for her.

Still, none of these things personally affect Nick. After all he’s not worried about Adalind’s warning and didn’t hesitate to tell Juliette that he kind of suspect the witch is up to her old tricks.

As for the wedding, it hit a snag. Rosalee’s sister, DeEtta, got extremely drunk and decided to do her sister a favor by destroying the family heirloom wedding dress… on the day of the wedding. DeEtta had gotten married in it twice and both times ended in divorce. So naturally she thought the dress held bad ju ju. But if she was going to destroy the wedding dress then she should have done it sooner. Preferably when the bride had more time.

Not that Juliette was all that upset. Monroe later revealed to his hung over sister-in-law that they hadn’t liked the dress to begin with. And Rosalee ended up getting her dream dress thanks to her in-laws. So all’s well ends well?

Outside of the wedding universe that seems to be taking over, Adalind has been playing some dangerous games. She turned Juliette against Renard easily enough. The harder part of her “mission” though proved to be convincing Trubel of being who she said she was.

Adalind slept with Nick under the guise of his girlfriend and when she was leaving – she hastily tried to escape Trubel before the young Grimm could pick up on anything. Yet she failed when she mentioned how much she hated bacon.

Trubel found that weird because just yesterday Juliette had said the opposite. So she followed that Juliette (believing her friend to be upset) and saw how she became Adalind while in a taxi. Unsure of what was going on; she returned to the house only to see another Juliette leaving with Nick.

Trubel was so confused and couldn’t comprehend two Juliettes until Renard came knocking on the door. He said that Nick was in danger and that he was the only one that could help. Earlier that day he found Adalind’s secret hideout and saw what spells she was using. And whatever she’s planning – he’s managed to find a counter agent. All that’s left is to give it to Nick and hopefully in time.

Time, sadly, is something he ran out of though. Steward arrived at the house and shot Renard. He would have gone on to kill Trubel, but she got to him first.

Trubel called in for help for Renard and then she went running after Nick. She knows that time is of the essence and that’s why a Grimm is willing to risk running into Wesen-filled wedding. Nick couldn’t even handle showing off his own Grimm to this crowd so how will Trubel fair?

It wasn’t that long after they left the house that Nick and Juliette picked on the fact that she wasn’t the one that he slept with. Juliette had confronted Nick about cheating and he replied that was ridiculous seeing as it was supposedly them together that messed up the bed sheets. So once all is revealed and Adalind is blamed – there’s some leftover tension between them. Juliette has had enough with spells and things that simply come with being with Nick. And she starts to question how much more can she put up with.

She truly was beginning to drift away. From him and their life together when Trubel came crashing in after the “I do’s”. Several Wesens were volged and things got tricky when they saw her. As in they all surrounded Trubel and ended up knocking the crucial potion out of her hand onto the floor. Nick and the guys got her out in time, but Nick’s glasses had fallen off in the struggle.

Funny thing is – no one realized he was a Grimm. And he couldn’t tell which ones were volged.

Adalind took Nick’s powers and the only thing that could have saved them was destroyed by the overzealous wedding guests. So Nick’s human and the life Juliette was just complaining about has now become a whole lot simpler. Or so we thought!

When 911 arrived at Nick’s house, there was a dead federal agent and Wu found a book filled of creatures he thought only crazy people saw. So how are his friends going to explain this one?