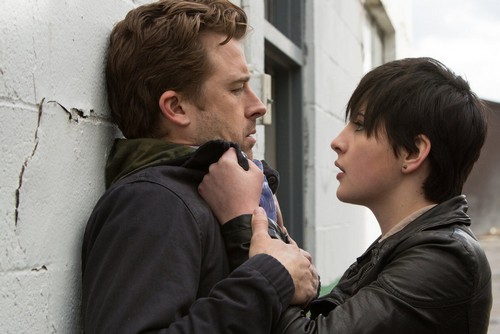 GRIMM returns to NBC tonight at 9PM EST with a brand new episode. In “The Inheritance,” Nick and Hank investigate a double homicide that’s linked to the Verrat. Meanwhile, Trubel meets a father-and-son team who traveled a great distance to find “the Portland Grimm”; and Renard grows suspicious of Adalind’s behavior.

On last week’s episode Nick and Hank took Trubel on a ride along – Jacqueline Toboni guest starred– Nick (David Giuntoli) did his best to educate Trubel (guest starred Jacqueline Toboni) on how best to handle the world she was learning about for the first time, and decided it be best to bring her on a ride along with Hank (Russell Hornsby). They found themselves investigating the homicide of a young woman that stroke a chord for Trubel. Meanwhile, Adalind (Claire Coffee) made a discovery that she hoped will lead her to regain something she hadlost. Bitsie Tulloch, Silas Weir Mitchell, Sasha Roiz, Reggie Lee and Bree Turner also starred.  Did you watch last week’s episode?  If you missed it we have a full and detailed recap, right here for you.

On tonight’s episode a mysterious duo comes to Portlan in search of Nick – C. Thomas Howell and Jacqueline Toboni guest star — Nick (David Giuntoli) and Hank (Russell Hornsby) are called to investigate a double homicide, and quickly learn the victims were from a special section of the Verrat tasked with finding rare objects pertaining to the Wesen world. Trubel (guest star Jacqueline Toboni) gets involved with a mysterious father-and-son tandem that crossed the country in a desperate attempt to deliver invaluable cargo to “the Portland Grimm.” Meanwhile, Captain Renard (Sasha Roiz) begins to grow suspicious of Adalind’s (Claire Coffee) recent behavior and quietly decides to put extra eyes on her. Bitsie Tulloch, Silas Weir Mitchell, Reggie Lee and Bree Turner also star.

Nick and Hank are called to investigate a double homicide, and quickly learn the victims were from a special section of the Verrat tasked with finding rare objects pertaining to the Wesen world. Trubel gets involved with a mysterious father-and-son tandem that crossed the country in a desperate attempt to deliver invaluable cargo to “the Portland Grimm.” Meanwhile, Captain Renard begins to grow suspicious of Adalind’s recent behavior and quietly decides to put extra eyes on her.

Tonight’s episode begins with Nick, Juliette, Rosalee, and Monrow having dinner and talking about the wedding. Nick jokes about the rings to stress out Rosalee a little more. Truble comes in after everyone is seated and begins to give a little more information on herself that she hadn’t shared before. Afteer being praised about how well she is handling everything. As Truble is piling crazy amounts of pasta on her plate, she shares the experience of the first time she saw a Wesen. She didn’t have anyone to help her through the experience so it was very difficult. A man who was to be working at her house took her into the garage, she explains. She saw his face change and tried to push him away. That was the first time she her the word Grimm. No one believed her and all told her she was lying. The conversation is interrupted as Nick gets a call from someone who doesn’t identify himself but explains that he is looking for a detective named Nick Burkhardt and wanted to make sure it was him. When Nick confirms he has the right guy, the man chickens out and says that he’ll call later since he sounds busy. Actually, he was in front of his house watching and saw he had company. He leaves and is later seen making his way through a hotel lobby.

He gets to his room and is immediately accosted by his father at the door asking if he talked to Nick. His son, Josh, explains that he made contact but that Nick was busy. His father is very upset, explaining that he specifically said to bring him back as he has something very important to share with him. Josh keeps belittling his father by telling him he keeps talking about some fantasy characters and he is just sick and needs help. He believes it is all nonsense and blows off his father’s pleas. Just then there is a knock at their door. The father tells Josh not to answer, but Josh tells his father he is just paranoid and that they were expecting maintenance to come. He opens the door to a verrat that storms in and attacks Josh. He gets knocked out and Josh’s father makes sure he won’t be following them as they rush out of the hotel moments after the father again tries explaining to Josh how they are trying to kill him and how he MUST find Nick. Shortly after they leave, another verrat comes in and see they are gone.

Josh and his father drive to a warehouse. It is the location where Josh’s father is storing the trunk he wants to show Nick. They begin to go through it and the father pulls out a paper with a picture on it. He gives it to josh with careful instructions to get it to Nick because he’ll know what it means. Josh heads to Nick’s house but speaks with the only person there…Truble. She asks who he is and what he wants. He shows the picture through the window and she immediately opens the door and starts asking him what he knows, etc. She doesn’t trust him but explains that she must go with him when he returns to his father. Josh is skeptical but allows her to go with him. At the warehouse they go through some of the items in the trunk after Truble carefully interrogates the father.

Meanwhile, Renard walks in on Adalind tending to a bad cut and he seems suspicious. Later that evening he wakes up in bed and notices she is not there. He gets up to find her and overhears her on a mysterious phone call which she attempts to play off as something else, but it is too late-another red flag. She drops her robe to redirect his attention and it works. Still suspicious Renard calls Wu later and tells him to be sure to keep an eye on her and let him know if she leaves the hotel.

Later, Hank and Nick meet with Renard and get some more details on the rogue agent still in Portland. Meanwhile, Adalind goes to Nick’s and begins searching around. She finds a hairbrush and pulls hair from it. Moments later, Renard walks in and confronts her on what she is doing. She tells him that she doesn’t need to tell him anything. She manipulates a vase to come from behind and hit him in the head so hard he collapses. She takes off with the hair and clothing she had grabbed from the house and leaves Renard.

Josh gets a phone call from a “Detective Donavan” telling him that he needs to talk to him and his father about the hotel incident. He says he knows about everything and understands that Josh acted in self-defense but needs to meet with him to fully clear him and get everything straightened out. Josh agrees and tells him that he is at the hospital with his father. He then gives him the exact hospital he is at which is obviously not good as this is not truly someone who will be helping Josh or his father. While he talks on the phone, Truble is using the hospital phone to finally talk to Nick who she couldn’t get in touch with earlier. She gives him the update on what happened and they cannot believe there is another Grimm among them….and so close. Shortly after, Nick comes to the hospital but Josh’s father is barely coherent and can’t really say much. Nick fills Josh in a little. When Josh tells Nick another detective is coming, he asks for more details. When he learns that it was not one of his detectives, he is concerned. Just then the father stops breathing and they call a code blue. Nick tells Truble to stay there, but thankfully she doesn’t. While Nick goes outside to meet Hank, who almost gets plowed down by the bad guys after Josh and his father, they are both then met with trouble as a team of verrats begin trying to take the three down. Truble gets some good fighting in so it was fortunate she didn’t listen to Nick.

Nick goes back to the hospital room and is told by Josh that his father passed. They talk briefly and Nick tells him to come to his house. There, Nick and the gang provide more details to Josh and he is pretty shocked by it all, especially that it is real. They begin looking for the key his father kept talking about and figure out it is in his walking cane, as they were going through the trunk that is now at Nick’s house. They find the key and Nick puts previous keys together to see what he now has.

In the last scene, Adalind has used the hair and lingerie she stole from Nick’s and we see her transform before our eyes into Juliette. She works to get Juliette’s voice and demeanor just right and gives a devilish grin. Wow! Next week’s finale is sure to be explosive and hopefully will provide us with more answers!