BY Kristine Francis on May 2, 2014 | Comments: one comment
Related : Grimm, Recap, Television 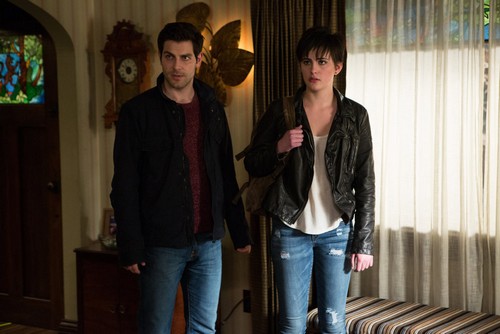 GRIMM returns to NBC tonight at 9PM EST with a brand new episode. In “My Fair Wesen,”  Nick and Hank introduce Trubel to her new world by taking her on a ride-along, during which they investigate the murder of a young woman. Elsewhere, Adalind makes a discovery that may help her reclaim something she lost.

On last week’s episode Nick and Hank were on the case when a deadly female came to town and attacked members of the Wesen community. Meanwhile, Adalind considered teaming up with a new and dangerous ally.  Did you watch last week’s episode?  If you missed it we have a full and detailed recap, right here for you.

On tonight’s episode Nick and Hank take Trubel on a ride along – Jacqueline Toboni guest stars – Nick (David Giuntoli) does his best to educate Trubel (guest star Jacqueline Toboni) on how best to handle the world she is learning about for the first time, and decides it best to bring her on a ride along with Hank (Russell Hornsby). They find themselves investigating the homicide of a young woman that strikes a chord for Trubel. Meanwhile, Adalind (Claire Coffee) makes a discovery that she hopes will lead her to regain something she has lost. Bitsie Tulloch, Silas Weir Mitchell, Sasha Roiz, Reggie Lee and Bree Turner also star.

Juliette wasn’t too pleased to find another surprise guest at her door. First there’s was Nick’s mom and Adalind now it’s a young Grimm. And not just any Grimm either. The nickname Trubel spelled out its own set of problems not to mention the girl’s already killed a few Wesens. However Juliette came around to the idea of the girl staying with them. Like Nick explained, Trouble has nowhere else to go and his longtime girlfriend tends to have a soft spot.

Trubel has never met another Grimm and she’s shocked to see the way her kind can live. To her, Nick and Juliette are so normal. Perhaps too normal for this lifestyle. Trubel simply can’t understand why someone like Juliette would even stick around knowing what Nick sees on a regular basis.

And though they’re nice to her – Trubel nearly ran away. The only thing that stopped her was Nick. He talked some common sense into her by saying she couldn’t do all of this on her own. So she chose to stick around and learn about her culture.

Nick though her first step to adjusting should be a visit with Rosalee and Monroe. Trubel has only known Wesen trying to kill her so seeing that they can be safe should go a long way to erasing her biasness.

The meeting itself wasn’t too bad. In truth, Rosalee and Monroe were more nervous than Trubel was. While Trubel wasn’t scared of them. Nor was she particularly interested in vulge stage. What she grab her attention was how they were able to tell she was a Grimm. Until then Trubel never knew that Wesens were actually scared of her.

She probably would have asked more questions on the subject, but Nick and Hank got a new case. They didn’t want to take her with them yet they couldn’t very well leave her with Monroe and Rosalee. So she tagged along and even though she wasn’t supposed to – she left the car to investigate along with the guys.

Trubel didn’t mean to announce the kill as Wesen. It just kind of came out and Wu heard her. She was able to cover it up with lie, but she’s going to have to be more careful. Hank warns her that she can’t go about saying that to everyday people.

Hank and Nick have seen a similar Wesen to one that killed their victim. He coheres his victims into doing what he wants and when they fail like in this recent case and kill them when they disappoint him. The body the police have is just one of his “girls”. The others are currently living in fear from their “master”.

The body of the girl they found was a foster kid. She had aged out of the program so there wasn’t much her former den mother could tell the cops. But the victim had a friend that was still there. Trubel saw her “change” when Nick didn’t. And when Nick came back to the car saying the friend didn’t tell them anything – Trubel took the risk of telling the girl she was Grimm.

She did it to scare the other girl into confess what she knows. Her plan worked even if the guys didn’t appreciate her methods.

Trubel found out that their victim met a woman who supposedly wanted to help her. Now the guys were content to do re-con. Trubel on the other hand thought it would better to tempt the procuress out into the open. She pretended to be a homeless knowing how much the other woman prey on the weak.

Again, the plan worked. It worked so well that Trubel was taken before either of the guys could get to her.

Trubel thought she could handle herself just fine and she can’t. The man in charge, Ken, won’t allow her to leave. According to him, there’s a rule in place. It’s called “New Girls stay with him for their first night”.

Trubel wasn’t having it and when Ken lost control and vulged in front of her he then realized she was a Grimm. Trubel warned the other girls to run and they did. All except Donna, the procuress that is. She’s also Wesen.

Nick and Hank arrived in time to help, but Nick is worried about Trubel. He doesn’t want her being so reckless. Though he really has no choice in the matter. Trubel apologized for today. And then she went to go start her own book on Wesens.

Is she up to something or has her natural curiosity taken a disturbing turn?

Then there is Adalind. She’s obviously using Renard’s feelings for her to her own ends. But what will she do with him afterwards?