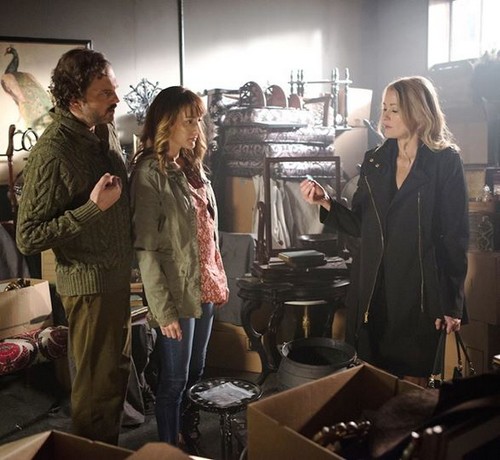 Grimm returns to NBC tonight with a brand new Friday November 7, season 4 episode 3. In “Last Fight,” Nick [David Giuntoli] investigates a vicious slaying at a boxing gym while dealing with repercussions from a strange vision. Elsewhere, Monroe [Silas Weir Mitchell] and Rosalee [Bree Turner] make some headway in their quest to help Nick regain his powers; and Adalind gets an unusual visitor.

On the last episode as Nick (David Giuntoli) and Hank (Russell Hornsby) turned their attention to a string of attacks where victims were left without their memories, Nick weighed whether or not he should regain his Grimm abilities. Trubel (guest star Jacqueline Toboni) joined the investigation and put herself in harms way. In Vienna, Adalind (Claire Coffee) was being held captive and learned that she was more connected than ever to Nick. Meanwhile, Captain Renard (Sasha Roiz) continued to fight for his life as a mysterious visitor (guest star Louise Lombard) arrived to help him. Did you watch last season’s finale episode? If you missed it we have a full and detailed recap, right here for you.

On tonight’s episode as per NBC’s synopsis, after Nick (David Giuntoli) has a bizarre, unsettling vision, he and Hank (Russell Hornsby) find themselves on a case that takes them into the world of boxing. Trubel (guest star Jacqueline Toboni) finds herself under the watchful eye of Agent Chavez (guest star Elizabeth Rodriguez) before jumping into the ring to help with Nick’s investigation. Meanwhile, Monroe (Silas Weir Mitchell) and Rosalee (Bree Turner) get some unexpected help in figuring out a way to restore Nick’s Grimm abilities. Elsewhere, Adalind (Claire Coffee) encounters a mysterious visitor in her dungeon cell. Bitsie Tulloch, Sasha Roiz and Reggie Lee? also star.

Don’t forget to come back here tonight at 9 PM EST for our recap. In the meantime, hit up the comments section below and let us know what you’re most looking forward to in tonight’s season 4 episode 3.

Fortunately, Adalind’s little magic trick appears to have worked out in Nick’s favor on tonight’s episode of Grimm. After she had made him go blind for a few minutes, Wu and Juliette took Nick to the hospital because they were so worried about him.
And that distraction meant Wu never got the chance to ask Nick about Trubel and

Nick wasn’t pushed into once again lying to a friend. Although, when Juliette heard about why Wu was really at their house – she told Nick to simply tell the truth. She wanted Nick to tell Wu about the other world and he told her he didn’t even know if he should do that what with losing his own powers to see Wesen.

How can it be beneficial for anyone to know that creatures like the Wesen exist but that you wouldn’t know it if they sat right next you? It’s currently hard for Nick to grasp it so he doesn’t exactly want to push his friend to feel like he’s feeling. However a new case, involving Wesen, might end up forcing Nick’s hand.

A young man named Bobby nicknamed Band Band was found murdered and he had two gaping holes in the middle of his chest. And the holes were much too big to have come from a gun. Later, the investigation revealed that he was caught up in some boxing scheme. And not everything looked right at the gym Bobby used to work at. But, without his vision, Nick knew he wouldn’t be of that much use in identifying what they were looking for. So he and Hank called for reinforcements.

They were going to need Trubel’s help in finding out what Wesen they were going to be dealing with. Yet Trubel was keeping secrets from all of them. Earlier, she had been captured and then released by Agent Chavez. And here’s the odd part – Chaez is Wesen but she didn’t want to hurt Trubel. Instead she wants to hire her. It seems whoever she’s working for is building up a team. A very special team that includes people like Trubel and so Chavez wants to recruit her.

And as Trubel is thinking over the offer, she’s been told to keep her mouth shut in the meantime. Chavez had made some threats. She told Trubel that whoever she told will then have to face the same consequences she did if Chavez’s cover was blown.

Hence, Trubel wasn’t really in the right frame of mind to go undercover at boxing gym. She was barely there for an hour before someone nearly coldcocked her. Thankfully she was able to quickly get back on her feet and even knock someone out of the ring. But getting beaten wasn’t Trubel’s idea of fun.

She still got the information she needed, as in which Wesen were at the gym, though another dead body showed up before anyone could act. The guys only figured out the gym owner was corrupt when it was too late.

The owner would manipulate Wesens into fighting for him in order to make a profit. He killed Bobby when he was going to rat him out and he killed his trainer when he told him his star fighter shouldn’t be pushed into fighting any more people.

Therefore, with all the information they managed to gathered, the guys confronted their suspect. They thought by merely confessing to know what the gym owner was – he would back down and admit to his crimes. Yet, they were wrong.

He was Wesen and he knew Nick and Hank couldn’t “see” him. So he chose to fight them. And when Hank and Nick went to apprehend him – they soon realized they couldn’t do their jobs unless one of them was a Grimm.

Trubel actually had to step in to save them. And Nick wasn’t too happy about. Yes, he’s grateful but he doesn’t like being weak. He wants to be a Grimm again.

And now all he has to do is convince Juliette into allowing him to be a Grimm again. Since Adalind’s curse, Juliette has been looking at their situation as a blessing. She thought that if Nick lost his powers then maybe they could return to having a normal life again.

But nothing about Nick is normal. When he was at the hospital, they had run tests and his cornea (his eyes) were showed to have something wrong with them. The optometrist said that his eyes were special. They could see things other couldn’t yet something looked like it was blocking his ability.

And immediately Nick knew what she was talking about. Adalind had stolen his powers and everyone wants to get them back for Nick. Even Renard’s mother, Elizabeth, is helping Monroe and Rosalee to find a cure.

So the one person that’s fighting the inevitable is Juliette!