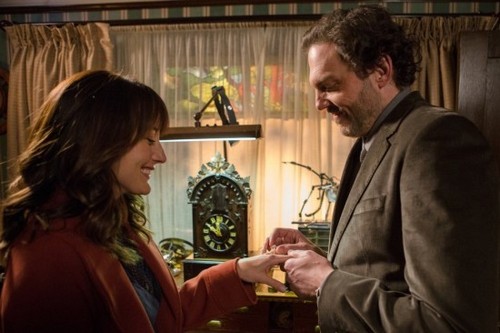 GRIMM returns tonight with a new episode called, “The Wild Hunt.”  On tonight’s show Monroe’s parents decide to surprise him and Rosalee with an early arrival to Portland after learning some exciting news.  If you missed the last episode, don’t you worry your little Wesen heart, because we recapped the show for you RIGHT HERE.

On last week’s episode Nick (David Giuntoli) and Hank (Russell Hornsby) were called to the gruesome murder of a veteran working in home security. During their investigation, they discovered this might be one of several revenge killings regarding a horrifying cover-up involving members of the army and military contractors. On the domestic front, Monroe (Silas Weir Mitchell) accompanied Rosalee (Bree Turner) during her long overdue reunion with her mother and sister. In Europe, Adalind (Claire Coffee) sees hinted of what she thought might be her powers returning. Bitsie Tulloch, Sasha Roiz and Reggie Lee also star.

Tonight’s episode of Grimm starts off with a marriage proposal.  Monroe programmed a cuckoo clock to say “Will You Marry Me?” and when the door opened and the bird popped out, it was holding an engagement ring in its beak.  Rosalee accepted Monroe’s proposal.

Meanwhile a creepy man is murdering a cop and scalping him on the side of the road.

Juliette and Nick are struggling through their taxes.  Juliette wants to know why they haven’t received any more emails from Nick’s Mom.  Nick tells her to “feel free” to send a message to his Mom.  Then he rushes off, after he receives a call that someone murdered a highway patrol officer.

Rosalee and Monroe are lying in bed planning their wedding.  Rosalee wants to have a Spring wedding right there in Portland.  Monroe wants to invite all of their friends and family, but he is concerned that his family will be scared of Nick.

Nick arrives at the crime scene with Hank, Officer Aguilar had been involved in a high-speed chase the night before.  He reported he was chasing a white muscle car, and then he seemed to disappear.  The cops found him with a snapped neck, and a scalped head.

Monroe decides to call his parents and tell him the good news.  They have never even met Rosalee.  His Mom is thrilled, his Dad is shocked, he didn’t think Monroe would ever get married.  After playing twenty questions with his Dad, Monroe rushes off the phone.

Nick, Hank, and the other police officers are reviewing the dashboard camera footage from Officer Aguilar’s patrol car.  They believe that the suspect is a serial killer, he crossed the Mexican border and is working his way up the coast murdering and scalping officers.

In Austria “the resistance is solidifying,” and Gregor is being lectured by Viktor for not killing Sean Renard when he had the chance.  They are on to Adalind, they are putting two and two together and realizing that Adalind’s unborn baby may be Sean’s child instead of his dead brother’s.

Monroe pays Rosalee a visit at work and tells him that he called his parents and told them they are getting married.  Rosalee wants to know when she can meet him, but Monroe says there is “no hurry.”  Monroe’s phone rings, it’s his mother, and she wants to let Monroe know they are on their way to his house and they plan to spend the weekend there. Rosalee is freaking out because they have “so much to do” before his parents get there.  Monroe is freaking out because he neglected to tell his parents that Rosalee moved in months ago, and they have been living in sin.

Meanwhile in Austria, Adalind is having some pregnancy complications.  And by complications, I mean she is carrying a demon child.  When she pulls her shirt up in the mirror her stomach looks black, and you can see the baby poking his hands against the inside of her stomach.

The man that scalped Officer Aguilar is following an army soldier down an alley.  The soldier turns around and begins fighting him, but the soldier doesn’t stand a chance.  The scalper isn’t human.  He morphs into a monster and slaughters the soldier.

Rosalee and Monroe are trying to clean up their house before his parents Bart and Alice arrive.  Rosalee is scared that his parents aren’t going to approve of her and her “checkered past.”

Nick arrives at home, and Juliette reveals that she got an email from his Mom.  She tracked her to Albania.  According to Nick’s Mom she is headed back North to link up with the resistance.

Nick and Hank head out to investigate their latest murder scene, the army soldier that was scalped.  They receive a call that a police officer has located the white Dodge Charger that the scalper drives.  Nick and Hank rush off to the car’s location.

The scalper is in a motel room, hanging up his recent scalps from his victims.  He looks out the window and sees a police officer looking at his car, and grabs a duffel bag and heads downstairs.  He steals the front desk clerk’s car keys and throws him out of the hotel.  Nick and Hank arrive at the hotel and the clerk directs them to the scalper’s room, which is covered in blood, but the scalper is long gone.

Nick and Hank head back to the police station and look over the test results from the hotel room and the scalper’s car.  There are 27 different victims’ DNA, they are dealing with a fast serial killer.  Nick is pretty sure the scalper must be Wessen.  They head back to Nick’s house and look through his books, they realize the scalper must be a “Berzerker.”  A “Berzerker” goes on a killing spree and kills warriors (or any one wearing a uniform), and sews their scalps together to form a coat.

Rosalee and Monroe are cooking dinner, waiting for his parents to arrive.  And, they do so forty-five minutes early.  Monroe introduces Rosalee to his parents, who hug her and realize that she isn’t one of them (a Blutbottin).  His parents are furious, and so is Rosalee.  She storms out, and leaves Monroe to deal with his parents.  While Monroe is arguing with his parents, Nick shows up.  His parents freak out when they realize Nick is a Grimm and attack him…