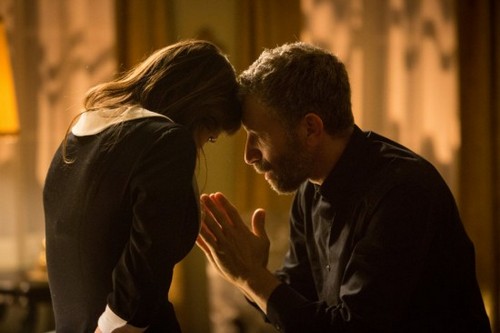 GRIMM returns tonight after a four week hiatus with a new episode called, “Red Menace.”  On tonight’s show Captain Renard (Sasha Roiz) finally tracks down Adalind (Claire Coffee) and has a stern warning for her.  If you missed the last episode before the hiatus, don’t you worry your little Wesen heart, because we recapped the show for you RIGHT HERE.

On last week’s episode, as a deadly crime spree began to surface, a century-old urban legend took shape in Portland’s sewers and became Nick’s latest case. In Europe, Adalind met Prince Viktor, who came to bring those responsible for his cousin Eric’s demise to justice. Meanwhile, Captain Renard responded to the recent attempt on his life.   After a string of delinquent teens went missing, an old Wesen tale of an evil Santa who brought more than just a lump of coal could have been the prime suspect. The investigation intensified as Nick and Hank took things a little too far. Meanwhile, Monroe enlisted Juliet  to surprise Rosalee for their first Christmas together with unintended results. Elsewhere, Captain Renard’s  tour of Europe brought him closer to tracking down Adalind.

Tonight’s episode of Grimm opens with Juliette receiving a mysterious phone call from her friend Alicia.  Alicia says she “needs to get out of here,” she is sobbing and apparently having problems with her husband.  She is scared of what he will do if she leaves him, Juliette instructs her to get out of her house and come to Portland to stay with her and Nick.

Meanwhile Adaline is meeting up with Sean Renard, he warns her that the royal family knows she is trying to sell a baby with royal blood, and questions whether it is his baby or Eric’s.

There is a party at a restaurant, a man in a suit is making the rounds, greeting guests and pouring them more drinks.  He is toasted at the party, it is revealed that his name is Boris and he is a “Great Healer.”  Boris also makes a speech, and heads into a room in the back to pull himself together, he is sweating profusely (he doesn’t seem healthy).  A man attacks him in the closet and tries to stab him with a knife, Boris transforms into some sort of beast and throws his attacker out of the window, his attacker makes a run for it down the street, but his arms are burning and deteriorating where Boris grabbed him.  His attacker returns to the motel room and tries to make a phone-call, but he drops to the floor before he is able to.

Juliette’s friend Alicia finally arrives at Juliette and Nick’s house.  She has a huge bruise on her face where her husband Joe hit her.  Nick warns Alicia not to tell Joe where she is hiding, and he tries to comfort her.  She turns her back and tries to hide her face from Nick as she transforms into some beast.  Nick is obviously thrown off, and pretends he doesn’t see her transformation.  She quickly returns to normal as Juliette re-enters the room.

Hank is at physical therapy, and shamelessly hitting on his therapist.  He invites her out, but she declines.  She wants to keep their relationship “professional.”

Sean is back in Portland, he fills Nick in on the drama in Austria.  Sean reveals that the family is Austria thinks Nick and Sean “pose a great threat.”

Nick and Hank are called to a crime, a body has been found in the freezer at the restaurant where Boris was at the night before.  They find the closet that Boris and his attacker fought in.  The body in the cooler belongs to a waiter named Marco.  They realize that Boris’s attacker killed Marco so he could steal his waiter uniform.

Boris’s attacker is still alive…barely.  He is covered in huge blisters, his skin is rotting off from him, and his teeth are falling out.

Sean, Nick, and Hank pay a visit to Boris, the “Russian Healer.”  His wife Olga says that Boris is busy doing a healing, but Nick, Hank, and Sean insist on seeing him.  They barge in on his healing session, and Nick notices Boris’s eyes glowing and veins in his hand are pumping something green.  Bruce says that he has nothing to hide, a “man attacked him and he fought back.”  He says his attacker hates him, he doesn’t know why.  He says that some men hate him because his healing doesn’t work or their wives fall in love with him.

Housekeeping has come to clean Boris’s attacker’s room.  She finds him dead in the bathtub, covered in blood and blisters.

Sean calls one of his Russian partners and learns that Boris kills all of his enemies with some sort of mysterious poison.

Nick and Hank head to Boris’s attacker’s motel room.  The think he is dead, but when they leave the bathroom the attacker stumbles out after them and falls on Hank.  They have been decontaminated, and their clothes are burned, because they have been in contact with the attacker.  Nick and Hank put on blue hazmat suits and head back to the office, they reveal to Sean that the attacker’s name is Alex and he has been taken to the hospital where he is dying from radiation poisoning.

Juliette and Alicia are at Juliette’s vet office chatting about Alicia’s husband Joe.  Alicia declares that “she is never going back,” and jokes about the perfect murder of her husband.

Sean and the rest of his team bring Boris in for questioning.  Boris doesn’t deny poisoning Alex, he claims he “had to” poison him because he was trying to kill him.  Alex was an assassin and was sent to kill Boris.  Sean wants to know who the assassin is working for, but Boris doesn’t know who sent him.  Sean releases Boris and advises him to leave the country.

Alex is awake at the hospital, Sean, Nick, and Hank pay him a visit to see if they can get any information out if him.  Alex reveals that Boris killed someone’s father, and they paid him to kill Boris.  He also confesses that he person that sent him to kill Boris is also living in the house with Boris.

Boris is in bed with his house-keeper Larissa, and she snaps on him and starts screaming “why won’t you die?”  She has been poisoning him on a regular basis, because he killed her brother and her father.  Boris drops on his knees and begs her for her forgiveness, and says he is a “changed man” and “he is not a monster.”  Nick, Hank, and Sean arrive at Boris’s house.  Larissa has just stabbed him, when Boris’s wife Olga learns that Larissa stabbed her husband she slices her throat.  Boris stumbles down the stairs and “heals” Larissa’s neck wounds.  He was so weak from being stabbed that healing her killed him.

After the drama at Boris’s house Nick heads home to Juliette and Alicia.  Alicia’s husband Joe calls looking for her and Nick tries to lie and say she isn’t there, Joe hangs up on him.  Little does Nick know, Joe already knows Alicia is at their house, e’s sitting outside in his car watching them.