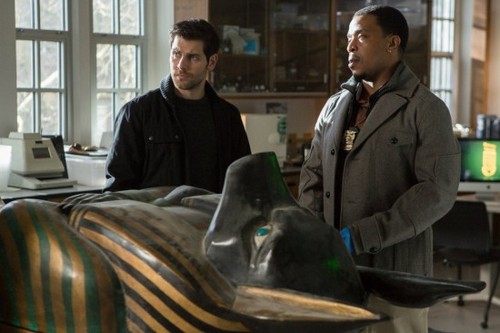 GRIMM returns tonight with a new episode called, “Once We Were Gods.”  On tonight’s show Nick and Hank become embroiled in an ancient battle that requires the intervention of the Wesen Council, prompting Monroe and Rosalee to share a history lesson.  If you missed the last episode, don’t you worry your little Wesen heart, because we recapped the show for you RIGHT HERE.

On last week’s episode a horrible new predator creeped into Portland with its sight set on a young expectant couple who were close friends of Sgt. Wu (Reggie Lee). Nick (David Giuntoli) and Hank (Russell Hornsby) had too figure out how to deal with Wu as the investigation escalated. Meanwhile, Adalind (Claire Coffee) prepared for a special delivery while her enemies were hot on her trail. Bitsie Tulloch, Silas Weir Mitchell, Sasha Roiz and Bree Turner also star.

On tonight’s episode Nick (David Giuntoli) and Hank (Russell Hornsby) find themselves thrown into the middle of an ancient battle and things heat up when the Wesen Council decides to get involved. Monroe (Silas Weir Mitchell) and Rosalee (Bree Turner) fill everyone in on early Wesen history. Meanwhile, Sgt. Wu (Reggie Lee) is still reeling from the events he recently experienced. As things heat up in Europe, one of the Resistance’s most trusted allies gets compromised as he tries to protect Adalind (Claire Coffee). Bitsie Tulloch and Sasha Roiz also star.

Wu is still locked up after his encounter with Aswang left him completely unstable.  In one aspect he knows what he saw and that it was real but then he has his so called friends lying to him. Both Nick and Hank claimed they never saw a creature and that was a lie. Wu was so sure of it until slowly the doctors at the facility started getting into his head.  They made him doubt himself. And now his focus is more on getting better than finding out the truth.

Meanwhile Wu’s “friends” are worried about him. Hank still believes they should tell him the truth as soon as possible, but the other guys think Wu needs some time to recover first. The poor man’s first initiation with the Wesen was a creature that even manages to scare Monroe and Rosalee. So it’s going take a while before Wu will be ready enough to handle the truth.

And the guys do have another bizarre case on their plate. An Egyptian tomb was recently uncovered and for some unknown reason a couple of Wesen creatures tried to steal it.  They didn’t make off the tomb but several people were murdered in the process.

Now Nick and Hank didn’t believe there was anything Wesen about the break in but their perpetrator did leave a cryptic message behind on the walls. It’s a statement (made in hieroglyphics) that doesn’t make sense to either of the guys and yet Rosalee and Monroe knew what the message stood for – and it had something to do with the mummy inside the tomb.

The message is connected to a group that seeks to protect the bones of the Wesen ancestors.

The Professor on the case thought her mummy was artificially manufactured (because of the horned ears) when its actual a real life Anubis creature that was captured in transformation. It seems that the Wesen creatures once roamed free and were even worshipped for it back in Ancient Egypt. That all changed of course but the wording on the wall linked the mummy to an ancestor. And ancestors are quite sacred in the Wesen culture.

Which leads to why someone was willing to kill to get the tomb back. If the mummy really is an ancestor then the Wesen after it won’t  necessarily give up on their first try. They’re going to keep on  trying to steal it. And that’s where The Council comes in. Monroe was wondering about whether they should inform them when Rosalee assured him that the those people probably already know about the mummy.

They do. Because it’s not like it hasn’t been all over the news and that’s why the Council made sure to send in Alexander.  They know Nick is familiar with Alexander and so they sent him back to Portland.  Where he promptly sought out Rosalee and Monroe. Apparently the Council also knows those two have been working with a Grimm.

The council came making requests though. They want the Wesen drawing so much attention to their kind stopped, but they want Nick to do it for them. They would have killed the man themselves but they know how attached Nick can get. Plus it saves them the bother.

Alexander left them after giving Nick his marching orders and as an added bonus he even revealed the Wesen plans to steal the tomb. The creature tried getting back up form the council and revealed all his plans to them. They know he’s going to target the professor in order to get back in to her lab.

Nick and Hank soon find the captive professor back at the office. The creature had transformed into his Anubis shape before knocking her out so there goes another “Wu” situation but Nick refused to kill him. He doesn’t like killing and he was never go to follow someone’s orders to do so.

No, they took the Anubis into custody and as for the mummy – it disappeared from the scene.  After all is said and done, Nick and Hank went with handing the ancestor over to the council. It meant burning a thousand year old mummy which was a major part of history but it was the right thing to do. This way the Wesens could bury him properly.

Though the guys have to deal with some ribbing from the office (they did lose a mummy) they at least get to enjoy having Wu back. Juliette had visited him when he was still at the hospital and she was able to reach through to him. She did it by not telling it wasn’t real but that he should face his fears. When Wu stopped being afraid of the aswang was when he was ready to come home.

Another person is heading home – Nick’s mom is back next