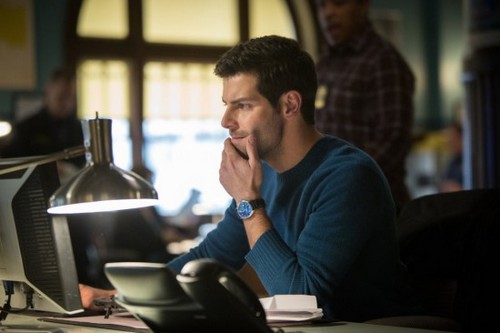 GRIMM returns tonight with a new episode called, “Mommy Dearest.”  On tonight’s show a monstrous predator goes after a couple who are friends with Wu, and Nick and Hank must figure out how to deal with a delicate situation after Wu witnesses something unexplainable.  If you missed the last episode, don’t you worry your little Wesen heart, because we recapped the show for you RIGHT HERE.

On last week’s episode  Monroe (Silas Weir Mitchell) fought an impossible battle to convince his parents (guest stars Dee Wallace and Chris Mulkey) to embrace the life choices he made. Meanwhile, Nick (David Giuntoli) turned to Juliette (Bitsie Tulloch) to help him figure out the Wesen aspect of his cop-killing scalper investigation. On the Royal Baby front, Captain Renard (Sasha Roiz) learned new information that forced him to contact Adalind (Claire Coffee) in the interest of keeping her and the baby safe from Viktor (guest star Alexis Denisof). Russell Hornsby and Reggie Lee also starred.

On tonight’s episode a horrible new predator creeps into Portland with its sight set on a young expectant couple who are close friends of Sgt. Wu (Reggie Lee). Nick (David Giuntoli) and Hank (Russell Hornsby) must figure out how to deal with Wu as the investigation escalates. Meanwhile, Adalind (Claire Coffee) prepares for a special delivery while her enemies are hot on her trail. Bitsie Tulloch, Silas Weir Mitchell, Sasha Roiz and Bree Turner also star.

Talk about babies on the brain. While there’s a perfectly explainable reason behind why everyone wants to hunt down Adalind for her baby; who is stalking a young Portland couple for theirs. A Wesen creature that can pass for a relative of Gollum’s attacked the mother when she was alone. He used his piercing tongue to stab her in the stomach and feed on her unborn child.

Luckily for her, she was able to keep fighting the creature off as her next door neighbor came running to her rescue. The neighbor heard Dana’s screams from and immediately tried to go to the expectant mother but by time she got to her; the creature had fled and Dana was severely bleeding from her abdomen.

Wu was on patrol when the 911 came over the lines. The case wasn’t in his area but he wasn’t going to let that stop him from answer the call. Not when he knows the people inside of the house. Dana and her husband, Sam, are great friend of Wu’s. He was even the one that recommended that they move to the city. And now he’s kicking himself for telling them how safe the city is when it’s definitely not.

Later at the hospital the doctors told Nick and Hank about the assault. The creature had sucked almost all of the amniotic fluid out of Dana’s stomach. The baby wasn’t hurt and Dana’s body will naturally replenish all the fluids she lost but Wu is still on guard. Dana had whispered something to him back at the scene and merely thinking about is terrifying him. She had said “Aswang”.

Aswang is creature Wu used to hear about from his grandmother when he was little. It was the name of a creature that would attack sleeping pregnant women. And after looking into it he found more than a few similarities between what happened to Dana and what was supposed to be a fable. Yet he can’t tell the detectives about what he believes are a mythical being. Not when he doesn’t know that they’re of the few that will honestly believe him.

Nick and Hank found signs of Wesen claws outside of Dana’s house. They just don’t know what created them, but as Juliette pointed out to them; they have to find a way to deal with the Wu factor. Rather than telling their friend the truth though they choose to continue on lying to him.

Like the way Sam is lying to them. Sam knows whose targeting his wife and unborn child. Whoever it is Sam tried to escape them by coming to the states. When he realized it didn’t work; he called home to speak to his brother. Sam was probably trying to ask for help but his brother told him to fess up to Dana instead.

Sam won’t do that. He feels like he’ll lose his wife if he admits to being Wesen and putting off Wu is only making him act more suspicious.

Sam does know the Aswang that attacked his family – it’s his mother. There is a tradition among the Aswang that his mother is refusing to let go. The eldest son would give up his firstborn child to his mother so that she may live a longer life. Without Sam’s baby, his mother will die naturally within a month.

Her son doesn’t have a problem with that but a woman that would have given Joan Crawford a run for a money isn’t going to let anything stop her from living longer. Not even her own grandchild!

Wu finally admitted his theory to the guys. He told Nick and Hank about the Aswang although he thinks Sam is using the myth to hurt Dana. Nick tried to downplay it while Hank couldn’t. He’s been where Wu is now and didn’t like it. Wu will be feeling like he’s losing his mind so Hank attempted to ease him into the whole Wesen thing. He started by telling Wu he believed him but Wu thought Hank was just yanking his chain.

Nick, Hank, Monroe, and Rosalee all think Wu shouldn’t be introduced to their world by way of an Aswang. Those things sound and look scary. That’s why they were going to eventually break Wu in with an easier creature.

Sadly, that’s out of their hands seeing Dana was released from the hospital and Wu decided to take preemptive measure of holding a stakeout in front of her house. He was outside when Dana’s mother-in-law chose to stop by. The elderly woman cunningly went with knocking out her son before attacking.

But the old crone wasn’t counting on Wu intervening. He bought Nick enough time with fighting off the Aswang that when his friends showed up they were able to kill the beast and get help for Dana.

As a result though, Wu lost it. He kept seeing the Aswang attack and couldn’t take the reality. Wu voluntarily committed himself to a psychiatric hospital where hopefully he’ll get better in time. It seems Hank was right when he told the rest of the group that they should let Wu in on the secret because now they’ve lost a friend to delusions.

There’s something different about Adalind’s daughter. The little girl isn’t like any other Wesen out there!