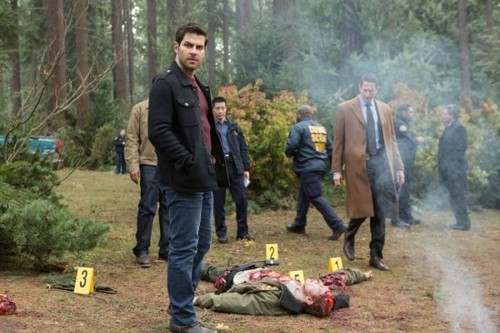 GRIMM returns tonight with a new episode called, “Revelation.”  On tonight’s show On the Royal Baby front, Captain Renard (Sasha Roiz) learns new information that forces him to contact Adalind (Claire Coffee) in the interest of keeping her and the baby safe from Viktor (guest star Alexis Denisof).  If you missed the last episode, don’t you worry your little Wesen heart, because we recapped the show for you RIGHT HERE.

Nick was a big surprise to Monroe’s parents. After they calmed down enough to stop trying to kill him they then learned that their precious son counted a Grimm of all things as a friend. They were so disappointed with Monroe that they couldn’t even stick around his house. They left in a fury which only made Monroe mad. His parents don’t like his fiancée or his best friend so naturally he wasn’t in the mood to help out Nick with yet another case.

Monroe kind of snapped at Nick. He let his frustrations out on him by basically calling Nick a user. Monroe implied that Nick only comes around when he wants information for a case. Deep down he knows that isn’t the truth but he was angry. And Nick was hurt.

When Nick got home he talked it over with Juliette and she was able to calm him. She told him that Monroe didn’t mean it and that if he had truly had a problem with Nick coming to him then he would have long since said something by now. The fact Monroe hasn’t means the words he threw at Nick were merely a fluke. Just in case though Nick said he’s not going to bring any cases to Monroe for a while.

Juliette was right – Monroe hadn’t meant to get that upset. It was because of the way Rosalee ran out of the house that made him lose his temper. He went looking for her once everyone had left and found her at her shop. At first Rosalee was going to call off their engagement. She said didn’t want to cut him off from his family but he stopped her from doing something they would both regret. He loves her and he told her he’s choosing her even if that means he’s cutting his family off.

Although he probably should help at least with the case. The Wesen that’s killing cops is scalping for a reason. According to Juliette who did some research on the practice, this brand of Wesen happens to scalp his victims in order to gain power from them. He sews up their scalps into a coat to wear. And he’s recently found himself a new victim out in the forests.

Meanwhile Captain Renard has his hands full with what’s going on in Geneva. Adalind is close to giving birth but she also got close to getting kidnapped. The woman she literally sold her child to for her powers back recently found that her buyer was working for the Royal Family. So Renard was forced into taking drastic actions. He got his men to her in time and they removed Adalind to a safer location…for now.

The Royal family weren’t pleased that Adalind escaped right around the time she was supposed to have been brought in. The Prince thought the gypsy queen had betrayed him by letting Adalind go but she warned him off. If she didn’t do it then that must mean someone close to him did.

Back in the city though Renard has to deal with the disappearance of a forest ranger. They found the man gruesomely murdered close to home. Juliette went over to Rosalee’s to cheer her up but she also needed more information on the murder. She’s worried what will to Nick with this new creature close to home.

Rosalee heard about the deaths and knew it was bad. If Monroe hadn’t walked in to realize it as well then she would have made him. Monroe knows he has to help with the case but he warns Nick that Hank can’t tag along for this one. The Wesen they’ll be dealing with is much too dangerous.

They agreed to meet up at Monroe’s place.

Monroe’s mother couldn’t give up on Mornoe despite what her husband’s position was. So Alice told him she was staying. And the first thing she did was go to Rosalee. She wanted to apologize and find a way for the both of them to be in Monroe’s life.

Her husband tried to leave without her and he couldn’t. When Monroe got home he saw his father waiting for him. Bart wanted to convince Alice to come back home with him yet Monroe told him that not only hasn’t he seen his mother but Nick was coming over.

Bart hates to be reminded about Nick. To him that is his son’s biggest offence. Against him and against nature. He doesn’t like how Monroe helps a Grimm kill his own kind. That’s why he let the boys only believe he left. But Bart didn’t go far. He waited until they left Monroe’s house and then chose to follow them.

Nick and Monroe went to the trailer to see what they needed for battle. What they found out was technically still a theory. One of Nick’s ancestors thought if he scalped the Wesen or even if he cut the creature then maybe it would lose its power.

No sooner had they come up with a solution that they found themselves surrounded. It wasn’t one Wesen they were dealing with. It turns out it three and what saved them from being outnumbered was the fact Bart showed up to help. All of three them were able to destroy the creatures because Bart didn’t want to see his son die. Even if he’s friends with a Grimm.

Bart had heard stories about theses beasts when he was younger. His grandfather told him that if these beings ever came around again then it would something much worse is around the corner.

Does this have to do with Adalind going into labor?

Bart is going to try and accept his son’s life but it’s going to be hard and the dinner he’ll have to have with Nick, and Rosalee and Juliette are bound to be awkward for a while.