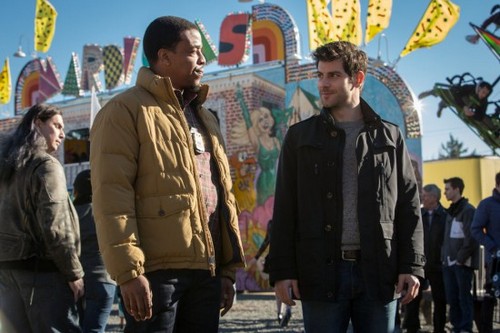 GRIMM returns to NBC tonight at 9PM EST with a brand new episode. In “The Show Must Go On” A double homicide leads Nick (David Giuntoli) and Hank (Russell Hornsby) to a traveling carnival where the performers are not what they seem. To get a better understanding of what’s going on behind the scenes Monroe (Silas Weir Mitchell) and Rosalee (Bree Turner) go undercover. On the wedding front, Monroe has a really important question for Nick. In Austria, an invaluable member of the Resistance makes the ultimate sacrifice to help Adalind.

On the last episode Nick (David Giuntoli) and Hank (Russell Hornsby) found themselves thrown into the middle of an ancient battle and things heated up when the Wesen Council decided to get involved. Monroe (Silas Weir Mitchell) and Rosalee (Bree Turner) filled everyone in on early Wesen history. Meanwhile, Sgt. Wu (Reggie Lee) was still reeling from the events he recently experienced. As things heat up in Europe, one of the Resistance’s most trusted allies was compromised as he tried to protect Adalind.  Did you watch last week’s episode? If not we have a full recap right here for you!

On tonight’s episode a double homicide leads Nick (David Giuntoli) and Hank (Russell Hornsby) to a traveling carnival where the performers are not what they seem. To get a better understanding of what’s going on behind the scenes Monroe (Silas Weir Mitchell) and Rosalee (Bree Turner) go undercover. On the wedding front, Monroe has a really important question for Nick. In Austria, an invaluable member of the Resistance makes the ultimate sacrifice to help Adalind (Claire Coffee). Bitsie Tulloch, Sasha Roiz and Reggie Lee also star.

On tonight’s episode of Grimm, the arrival of a traveling carnival show has brought nothing, but trouble. And this time it isn’t even the Wesen’s fault!

Like many other Carnival shows there’s always that one attraction that promotes a creature that’s supposedly a freak of nature. This particular show had their very own “werewolf”! The man playing the “werewolf” came, performed, and then he really just wanted to crash at home with a bottle. However two young ladies corned him into going with them. It seems they were big fans of his show and wanted to see him wolf out for them.

At first he resisted and then the girls started to provoke him. One of them even went as far as to slap him just to get a recreation. And she got reaction alright though it wasn’t what she was expecting!

A few hours later the girls’ bodies were found and properly reported. Which incidentally brought the case to Nick’s desk. He and Hank were looking through the girls’ apartment when they saw the ticket stubs to the carnival and decided to look there first. But they hadn’t foreseen they would be visiting a place completely run with various Wesen as the main entertainment. They saw several creatures reveal their faces to the general public. And Nick’s pretty sure they aren’t allowed to do that.

Wesens aren’t supposed to court public attention. Although the creatures at the carnival don’t appear all that thrilled to be on the job. Take the “werewolf”for example; Max has to drink after every performance. Why is that? Is someone forcing them to go up onstage?
Meanwhile in Austria – Adalind, the baby, and Meisner have managed to escape Prince Viktor and his men. But in doing so they lost one of their own. Sebastien sacrificed himself in order to buy his friends enough time to flee.

Back in Portland, Nick and Hank went to Rosalee and Monroe for help. They wanted to know more about the carnival and were surprised to learn that technically the circus people aren’t breaking any laws. Though the Wesens participating are taking a big risk onto themselves. When a Wesen keeps shifting into full form over and over again then he risks losing control of his human side.

It’s about time Max retires and yet he refuses to take a break. His girlfriend, a fellow Wesen, tried to tell him to take it easy and he flipped on her. Max came close to attacking her when the other guys came in and stopped him. Both he and his girlfriend said he didn’t mean it, but that doesn’t mean he has full control over himself or his actions!

He hurt his girlfriend’s leg and that left her unable to perform. So their boss needed to replace her for an upcoming show when in walks Rosalee.

Now Rosalee and Monroe wanted to check out the carnival scene to see who among the Wesen might have taken a turn for the worse, but Rosalee ended up getting picked to replace their injured Fuchsbau. Monroe thought it was a bad idea yet Rosalee convinced him that it was the only way they could learn which Wesen was sick.

She got to see for herself how close Max is to losing it. While their boss showed no signs of stopping or at least stalling the show. He was going to force Max to perform whether he wanted to or not!

Max couldn’t hold himself together when it came time for curtain call. He freaked out and nearly attacked Rosalee in front of a crowd full of people. Monroe, who was fortuitously in the crowd, quickly had to transform to stop him. And by time Nick and Hank arrived on the scene – the problems of Max and his ringmaster appeared to be well in hand.

The other main attractions didn’t like how their boss pushed Max or the way he tried to manipulate a fellow Wesen so he suffered a baffling accident. As in he was completely charred like he was participating in someone’s barbecue and yet none of the surrounding area carried even the faint hint of being burned.

And as for Max, his friends have reassured Rosalee and Monroe that they’ll be looking after him now.