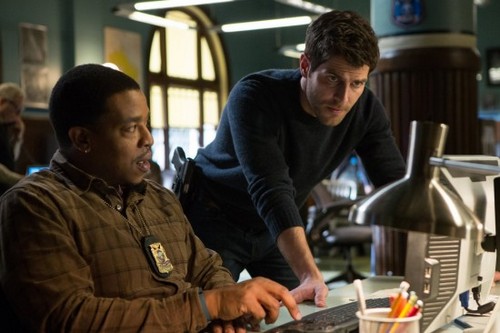 GRIMM returns to NBC tonight at 9PM EST with a brand new episode. In “The Law of Sacrifice,” Nick and his mother step in to protect Adalind’s baby while Prince Viktor enlists a dangerous ally to help him find the child.

On last week’s episode the Resistance’s plan to keep Adalind (Claire Coffee) safe got kicked into high gear when an unexpected ally arrivedto ensure she and the baby made it out of Europe safely. In Portland, as Monroe (Silas Weir Mitchell) and Rosalee (Bree Turner) prepared for their upcoming wedding, Nick (David Giuntoli) and Juliette (Bitsie Tulloch) were reminded of their failed proposal. Russell Hornsby, Sasha Roiz and Reggie Lee also star.

Well, there goes that secret because now everyone knows where Adalind and the baby are. Nick and his mother found them by tracing the car Kelly had stolen last week. While the Royal family were able to find the baby once they found evidence the plane carrying her and her mother landed in Portland. So the race is on – who will get to the Renard/ Schade family first?

And they are a family. Renard wants to make whatever he has with Adalind work. Even though she slept with his brother and he slept with her mother.

Nick went to his captain’s apartment trying to help. He wanted to offer the family his assiatnce in any way he can, but Renard was on guard. He knows how much Nick hates Adalind and he doesn’t want that spilling over to the situation with the baby. It will be hard for Renard to fight his family so he can’t be fighting the two Grimms as well.

Adalind doesn’t want to leave yet Nick points out that she doesn’t really have a choice anymore. Soon the Royal Family’s men will come looking for them and the first place they’d look would be at Renard’s. It’s not like her relationship with the bastard prince was a big secret.

Nick left them to ponder what he said, but by the time he rejoined his mom – he saw that it was too late. Kelly had waited outside of Nick and she was there when the FBI agent on the Royal Family’s payroll called in for back up.

Kelly didn’t kill him… thankfully. All she did was knock him out and the moment her son came down, she told him they had to move. It’s no longer up to Renard whether or not he wants their help. He’s just going to have to work with them or die.

Nick and his mother rescued Renard and his family. And then they had to look for a safe house. Which was much harder than it sounded because although Monroe and Rosalee’s was and remains their first option – explaining the baby to his friends was tricky.

Saying Adalind was back was hard enough but add in the part about Renard and the baby’s supposed great destiny meant that Nick is going to owe his friends a huge debt after this. He’s putting them in danger just by using their house.

Renard, Nick, and Kelly left Adalind and the baby there. They had to go see what an FBI agent was doing mixing with the Royal Family.

They interrogated him to see what he knows and then they made sure he wouldn’t talk. As in, no, they didn’t kill him but blackmail works just as well.

Then came the harder part for Nick – telling Hank. Hank was so scared when he found out that Adalind had a baby. Juliette had to quickly reassure him that he wasn’t the father before he could start to see the humorous side to Adalind playing house. Like he told Kelly – Adalind isn’t someone anyone would imagine having a baby with.

And while Hank is thinking the poor captain it really should be poor Monroe and Rosalee. The baby kept them up half the night and she only settled in when Kelly came back. It seems the little girl has taken a shine to the elder Grimm.

The plan was to use their FBI agent to lure in Prince Victor. They were going to ambush him in a deserted warehouse but they should have killed the agent because he told the Prince the truth the moment he left Hank’s line of vision.

So Viktor ended up going to Renard’s office at the precinct. He told him to give up the baby or he, Adalind, and Renard’s mother will all be hunted down for execution. And the bloodletting doesn’t stop with Renard’s family. Kelly was arrested for the murder of Catherine Schade. That happened right in front of Adalind who by the point was the only person that didn’t know who her mother’s killer was.

Renard called Adalind afterwards. He told her that they needed a statement from her on her mother’s death. So she went to him with the baby. And then when she got there, he told her that he would watch the baby in the meantime.

Adalind finally got around to naming her daughter – she called her Diana after the goddess of the moon and hunt.

But when she left to go give her statement, she was instead taken to Kelly. Kelly wanted to explain her actions to Adalind. So she told her a little bit of her own story. Kelly was hoping that Adalind would find peace in knowing that sometimes you have to give up what you love the most in order to do the best for them.

Adalind realized too late what Kelly was trying to tell her. She chased after Baby Diana and was unable to recover her from Viktor.

Diana will be fine though. Not only is she scary on her own, but she still has friends looking after her. Nick and his friends pretended to be resistance and kidnapped her back from Viktor.

They got Diana back not so that she can be reunited with her mother. The only way to keep them all safe was for Kelly to be taking care of Diana from now on.