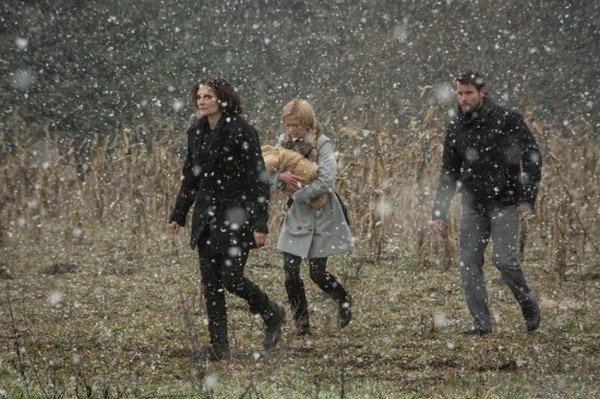 GRIMM returns to NBC tonight at 9PM EST with a brand new episode. In “Synchronicity,”  an unexpected ally swoops in to ensure that Adalind and her baby get out of Europe safely. Back in Portland, Monroe and Rosalee throw themselves into wedding-planning details; and Nick and Juliette remember their failed proposal.

On last episode a double homicide led Nick (David Giuntoli) and Hank (Russell Hornsby) to a traveling carnival where the performers are not what they seem. To get a better understanding of what’s going on behind the scenes Monroe (Silas Weir Mitchell) and Rosalee (Bree Turner) went undercover. On the wedding front, Monroe had a really important question for Nick. In Austria, an invaluable member of the Resistance makes the ultimate sacrifice to help Adalind (Claire Coffee). Bitsie Tulloch, Sasha Roiz and Reggie Lee also star.

On tonight’s episode the Resistance’s plan to keep Adalind (Claire Coffee) safe gets kicked into high gear when an unexpected ally arrives to ensure she and the baby make it out of Europe safely. In Portland, as Monroe (Silas Weir Mitchell) and Rosalee (Bree Turner) prepare for their upcoming wedding, Nick (David Giuntoli) and Juliette (Bitsie Tulloch) are reminded of their failed proposal. Russell Hornsby, Sasha Roiz and Reggie Lee also star.

As far as Nick is concerned – his biggest problem ahead is finding a way to tell Monroe that he can’t be his best man. He doesn’t want to do it and yet he feels like he has to let his friend down because what if someone woged at the wedding and noticed he was a grim. That could result in a fight and someone getting hurt. But, like Hank had brought up, how do the Wesen recognize him as a Grimm?

Monroe and Rosalee explain it to him. They tell him it’s all in the eyes. And every time they woge they see the worst version of themselves reflected back at them in Nick’s eyes. So the happy couple has told Nick to just wear sunglasses.

They don’t want Nick to bow out seeing as their wedding wouldn’t be the same without him there.

Juliette thinks it taking a big risk. Like say he tripped and his glasses were to fall. Then he would be causing the same disturbance that he wanted to avoid. And there was Nick thinking it would all be ok; that it before his girlfriend started to spell out the worst that could happen.

But the worse it yet to come. Adalind, her baby, and Nick’s mother are all returning to Portland.

The Royal Family got a little too close to capturing Adalind and the baby back in Austria. Then Kelly came swooping in for the rescue although she appears to have an ulterior motive.

The Resistance fighters were supposed to take Adalind and the baby to a safe house in South America. Or at best that’s what Renard had originally planned. Only he hadn’t counted on Kelly interfering when to be honest he really should have thought of a Plan B because it looks like Kelly kidnapped Adalind and the baby from right under the Resistance’s nose.

She got the plane to return them to Portland and then from there she made her way to Nick’s with a couple of Hexenbiests in tow.

Nick and Juliette were very surprised to see Adalind again. As matter of fact, Juliette’s first reaction was to attack, but Nick restrained her from going through with it. Though he possibly might have been thinking about partaking in similar actions. Fortunately for everyone his mom was finally able to put her two cents in.

She explained the importance of Adalind and the baby while Juliette helped the little family get settled in for the night.

Kelly told them that baby was more powerful than anyone realized and after Nick explained his own history with Adalind – she soon caught on to what made the baby special. When Adalind got her powers back then the ceremony must have also have affected her unborn child at the time.

But Kelly brought Adalind and the baby to Nick for a reason. She doesn’t want the baby to go to either the Royals or the Resistance. Kelly believes the baby should grow up like a normal child and decide its fate on her own.

However Adalind isn’t operating on this new plan. So she took her child and escaped the house. And by time Nick and co realized it, it was too late. Adalind was already halfway to Renard’s place by the time to figured where she was going.

Kelly and Nick tried to go after her, but they disagreed on how to handle Captain Renard. Kelly wanted to go in with guns blazing and Nick thought they should instead calmly speak to his captain. Still, Nick did get his mother to agree to his plan although she has yet to come across as a rational person.

So maybe, and this is just a reasonable guess, she’s going to break her agreement with her son. Because next week’s promo does have both Renard and Kelly pulling out guns!