BY Cate Meighan on May 10, 2014 | Comments: one comment
Related : Chris Martin, Gwyneth Paltrow 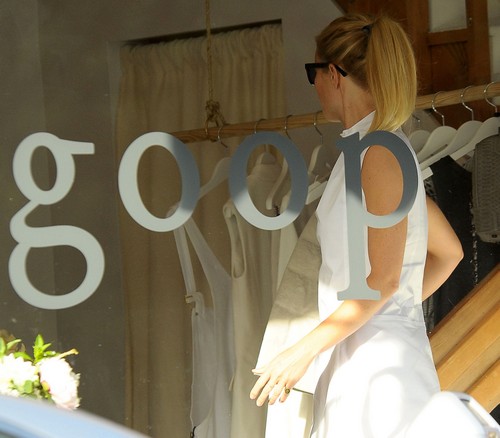 Pop-up stores and trunk sales seem to really be the way to go nowadays if you are a somewhat popular vendor with goods to quickly unload. I’m guessing Gwyneth Paltrow’s diehard Goop fans were thrilled to learn that there would be a two-story pop-up store front opening in the Brentwood Country Mart for one week only. Fans and paparazzi alike lined up for Monday’s 10am opening only to find that the doors weren’t really going to fly open until a half hour later. The delay certainly added fuel to the notion that Gwyneth herself would be on site to sign copies of her cookbooks.

Of course Gwynnie let everyone else handle the real work (i.e. customers) as she was nowhere to be found. The store looked like a Goop newsletter come to life but its’ owner was MIA. Why? Well the reason is pretty easy to figure out. Since announcing her split from Chris Martin back in March Gwyneth has yet to put herself in a public setting where people could really ask any questions. Imagine her reaction to some random chick who dares to ask about the divorce while Gwyneth was sharpie-ing her signature onto an inside book cover! It wouldn’t have been good and chances are that girlfriend wouldn’t be able to contain herself. Then the rumors about what a bitch the actress is would multiply with firsthand accounts. It was better for Gwynnie to just stay away.

Do you think that she will at least make a visual appearance before the show closes on Sunday or is this one pop-up that will never be graced with Gwyneth’s presence? Tell us your thoughts in the comments below!

Update: Gwyneth Paltrow finally stops by her store Goop at the Brentwood Country Mart in Brentwood, California on May 10, 2014. Gwyneth opened her clothing store recently as part of her bigger company Goop.com.