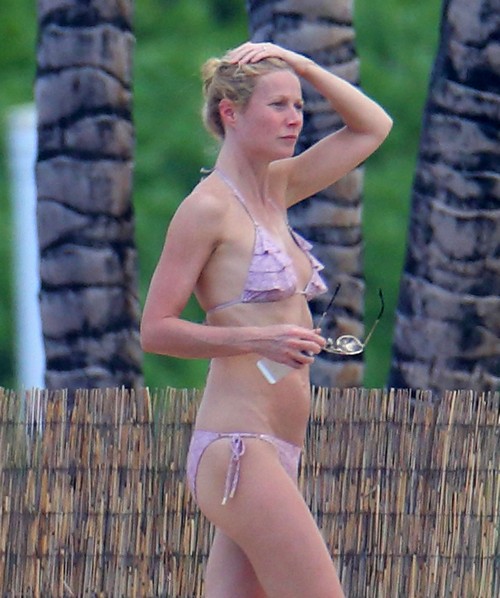 Did Gwyneth Paltrow’s GOOP Turn Chris Martin Off of Marriage for Good? They may have “consciously uncoupled” but some of the baggage from Gwyneth Paltrow and Chris Martin’s marriage is haunting the Coldplay frontman. Although Martin gave a recent interview to Zane Low saying he struggled to appreciate the good things in his life and that caused problems with the marriage, there’s more to the story.

Recent reports of affairs by both Gwynnie and Chris explain a lot as do rumors of an open marriage, but it seems like it was Gwyn’s GOOP that really turned off her handsome singer hubby. He didn’t like her airing their personal lives on her site which she used to pimp overpriced goods as part of her luxury lifestyle holier-than-thou blog. I’m still waiting on an informative GOOP blog on how to remove the stick up her gangly backside.

That’s also where she published their conscious uncoupling blog no doubt penned by Gwyn rather than Chris. If he’s sick and tired of her sharing their personal life to promote her GOOPY business interests, you have to wonder why he let her publish their break-up manifesto there. Maybe she’s got him so browbeaten that he had no say…

Seems Chris is scarred by a decade of GOOP and her pushy restrictive ways and says he isn’t interested in getting married again. Frankly, some of her GOOP is just GROSS GARBAGE. She’s written about not letting her kids eat carbs and how that leaves them with a “specific hunger.” Since when should your kids be left hungry?

She also opines about how she only lets Apple and Moses watch the telly if they are viewing programs in foreign languages. You know the English language is so déclassé for someone so full of GOOP. The bottom line is, one must assume, that Chris can’t ever remarry because no one else will ever be as good as Gwyneth.

She lets us know all the time how much better she is than everyone else. She eats better, lives better, cooks better and generally excels at all things more than any other female human will ever be able to. So I guess after living with and sleeping with such a goddess, Chris is just ruined for other women…

HA! I give it six months and he’ll be with a hard-bodied 20 year old (or Alexa Chung) who doesn’t tell him what he can eat, how he can dress, think or function and he’ll forget all about his GOOPY bossy ex.

Run Chris Martin. Run while you can. Take Apple and Moses with you and hide somewhere Gwyneth will never find you – somewhere with carbs, junk food and where your kids can have actual fun without being scrutinized and restricted by their judgy mom. Chuck E Cheese maybe? The GOOP will never find you there!