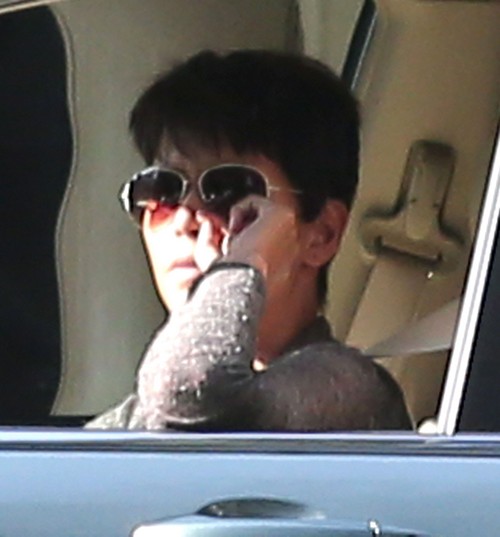 Did Halle Berry secretly break up with husband Olivier Martinez? It’s been less than a year since they were married and had their first child together, Maceo. However, she was noticeably husband-less at the post-Oscar party last week, and she avoided all the high-profile events such as Vanity Fair and Madonna‘s party. Maybe she wanted to keep a low profile and avoid speculation about a possible divorce? If so, mission failed.

The speculation was mainly sparked by the fact that Halle wasn’t wearing a wedding or engagement ring. Although she wasn’t with Olivier, plenty of spouses were absent that night due to other commitments. However, if that was the case we’d still be seeing Halle wearing some ring, no?

Halle also spoke to People Magazine the other night, and she discussed her baby son, Maceo, revealing, “You know, I’m working on a television show now. So I’m juggling working and being a mom and breast feeding while I’m working. It’s a whole new life for me now all over again, having a new little baby again.” No mention of Olivier? The way she discusses juggling her motherhood and her career seems to signify that there’s no one else in her life helping, even though she definitely mentioned Olivier in the past.

From all the evidence, it really does look like splitsville for the couple. There’s not a lot of reasons that Halle would show up alone during awards season, without a wedding ring, and then not mention her husband in interviews at all.

What do you guys think? Have Halle and Olivier taken a break? Or is Olivier otherwise held up, and Halle just didn’t mention him out of convenience? Let us know your thoughts in the comments below.

Halle Berry stopping by a friends house in Beverly Hills, California on March 4