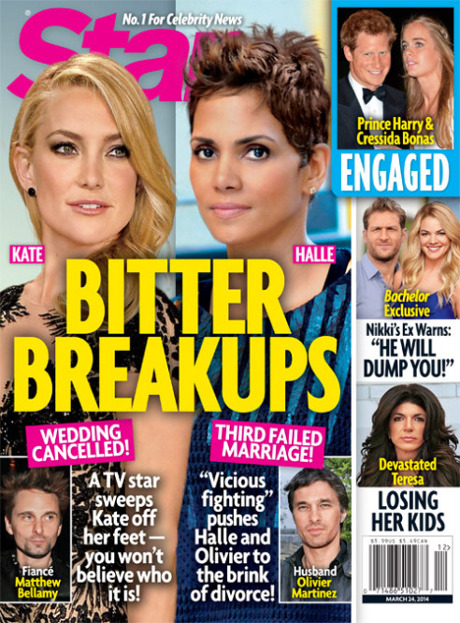 Halle Berry and Olivier Martinez just might be on the verge of a brutal divorce. This would be Halle’s third official divorce and more evidence to suggest that she’s had crappy luck with relationships, all of which have ended rather badly. Star magazine also features Kate Hudson, who’s also going through some relationship struggles of her own. She and her fiance, Matthew Bellamy, have reportedly been on the rocks for a while now and her constant flirting with other guys is suggesting that she may be over her lead-singing boyfriend.

Kate got engaged to Matthew in 2011. However, by the looks of how she was acting at numerous Oscars parties, one might be inclined to believe that she’s not as dedicated to her current relationship as one ought to be. She was giving eyes to Leonardo DiCaprio on several occasions, acting flirty with him, and now she’s been linked to  critically-acclaimed choreographer Derek Hough. Check out this story about how she asked him to give her private dance lessons!

Star reports, Halle, who’s been married three times, hasn’t been seen in public with her husband since Dec. 7, and for them, the problem is constant fighting. “They have had some extremely vicious arguments, and every small thing is causing issues,” an insider says. Adding to their troubles, is Olivier’s jealousy. “His paranoia has completely taken over.”

Check out this new edition of the magazine to get all you juicy gossip bits about these bitter relationships and fiery breakups!