Kate Hudson and Derek Hough Dating: She Hired Him for Private Dance Lessons and Sparks Flew! 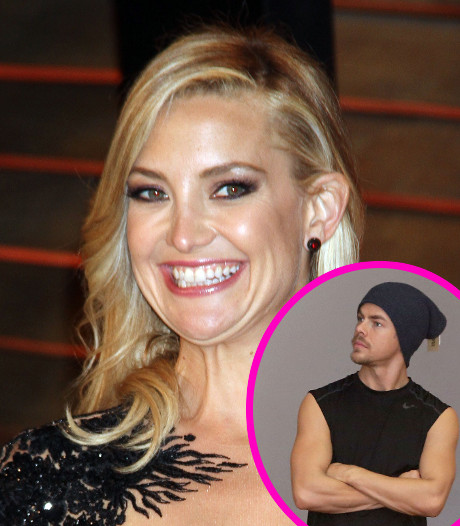 Kate Hudson and Derek Hough just might be the epitome of a perfect blonde couple. While nobody can be 100% certain as to their romantic status, rumor has it that Kate hired Derek Hough to be her private dancer — whoops, I mean private dance teacher. According to Star, Kate hired Derek for some one-on-one attention shortly after the world caught wind of her failing relationship with Matthew Bellamy.

Naturally, everyone’s started to think that this meetup could possibly spell the end to Kate’s relationship with her husband and potentially lead to a romantic fling with the Hough. The only problem? Derek doesn’t really seem like the type of guy that would be part of an affair and neither does Kate. But, hey, it’s Hollywood after all. Anything’s game. And if Kate and Matthew really are on the verge of an official split, then this could definitely be the straw that breaks the camel’s back.

A reported source for the tabloid says, “They had immediate chemistry. People on Kate’s staff were all talking about the sparks between them.” It also claims that the two were “joined at the hip and extremely flirty with each other” during a group outing with some friends. Not long after that, the couple was spotted at Disneyland — the happiest place on earth and the ideal spot for date night.

We’ll let you be the judge on this. Are Kate Hudson/Derek Hough really dating? Is Kate Hudson cheating on Matt with this lil’ blond choreographer? Derek Hough’s linked to a new person every day it seems, so we’re going to take all this gossip with a grain of salt. Leave your thoughts and opinions in the comments section below.