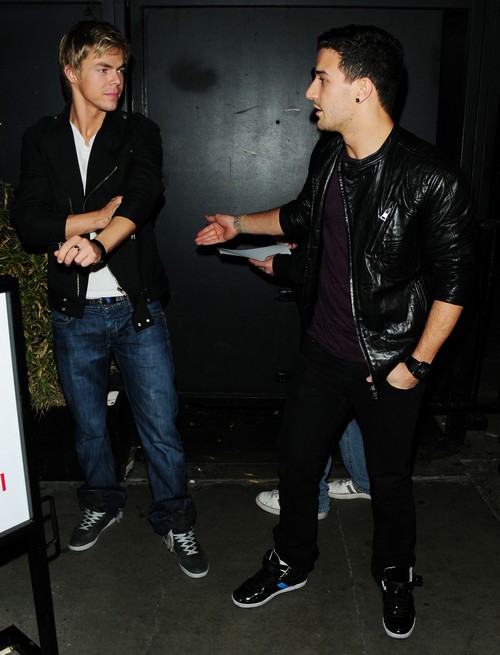 We told you all a few days ago about Dancing With the Stars costars Derek Hough and Mark Ballas buying themselves a new 1.25 million dollar home in the Hollywood Hills recently. It was the kind of purchase that raised eyebrows because we don’t ever see two grown men chipping in for a single family property-regardless of how spacious it may be, especially when they’re pushing 30. Add to that the fact that neither Derek nor Mark is ever really connected to any woman for very long and there you go, rumors galore.

Apparently the guys have caught wind of the jokes about the master bath having his and his sinks and so Mark took to his Twitter to blow off the innuendos saying, “Just a bunch of gossip wankers that don’t know any facts or anything about real estate #getalife LOL”

Well, I’ve never heard of a real estate agent encouraging anyone to buy a home with someone that they aren’t married to or at the very least in a committed relationship with, have you? Usually that’s a big no-no because you are setting yourself up for disaster. Also, did you notice that Mark didn’t deny the original insinuations? He took the time to comment but didn’t bother to call the rumors crazy, instead he name called and tried to blow it off. If there is nothing at all to the gay rumors then I’d expect Mark to deny them and remind people that he and Derek have been best friends since childhood. Instead it’s crickets. What do you think is really up with these two? Tell us your thoughts in the comments below!