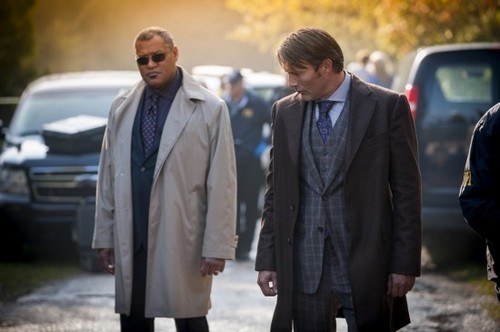 Tonight on NBC the dark and haunting series “Hannibal” returns for a second season.  On tonight’s episode called, “Kaiseki,” Will’s innocence continues to be tested as Cynthia Nixon and Gillian Anderson guest star.  Did you watch last season’s finale?  If you want to get caught up we have you covered with a full and detailed recap, right here.

This season more there will be moreshocking revelations and games of psychological cat and mouse. Will Graham (Hugh Dancy) is locked in a mental asylum accused of Hannibal Lecter’s crimes (Mads Mikkelsen). Now that Will sees Hannibal for what he truly is, he faces a fight to prove his own sanity and convince those closest to him he is innocent of murder. Jack Crawford (Laurence Fishburne) is dealing with his own feelings about Will, and whether his protégé is in fact a cold-blooded killer. Looking for answers, Jack turns to Hannibal, a man he has come to trust. With Will locked up, Hannibal becomes Jack’s new consultant on cases. Hannibal is torn between self-preservation and his desire to keep Will close to him, despite advice from his psychiatrist, Bedelia Du Maurier (Gillian Anderson), to stay away.

On tonight’s episode Will (Hugh Dancy) is determined to fight for his innocence as Hannibal (Mads Mikkelsen) and Jack (Laurence Fishburne) try to wrap their heads around the fact he’s behind bars. Meanwhile, Alana (Caroline Dhavernas) faces a strained relationship with Will while Kade Purnell (Cynthia Nixon) with the FBI pays him a visit.Also starring Hettienne Park, Aaron Abrams, Scott Thompson and Gillian Anderson.

Tonight’s season 2 premiere looks like it is going to be amazing, so be sure to tune in for our live coverage of NBC’s new series at 10:00 PM EST!  While you wait for our recap hit the comments and let us know how excited you are about this new series so far.

Hannibal slices meat. Jack comes into the room. They look at each other. Hannibal goes back to his cooking. We see his reflection in the blade of the knife. Jack goes to pull his weapon and Hannibal throws the knife at him and it sinks into his hand. They brawl mightily and both are bloody. They seem evenly matched. Jack chokes Hannibal who then smashes his with a pepper grinder. He rams him in the face with the refrigerator door and draws a knife. He nearly stabs Jack in the face and then Jack beats him to the ground. He chokes Hannibal off his feet until he goes limp. He’s faking and grabs debris off the floor and stabs Jack in the neck with what seems like a fatal wound.

They discuss Will’s fate and Jack thinks it’s his fault. Jack discusses Will throwing shade at Hannibal saying he’s to blame and Hannibal encourages him to investigate him thoroughly to clear his name. Jack seems ready to discount Will’s accusations since he was “insane” when he made them.

We see Will standing knee deep in a river fly fishing. He seems either at peace or numb. He stares and sees a giant elk by the shore. We see that he’s in his a small cell daydreaming while Chilton tries to talk to him. He asks him how he feels and Will says he feels like he’s trapped in a dunking tank while softballs are lobbed at him trying to make a splash. Chilton reminds him he’s in his hospital and that he has the right to ask him questions because he’s his patient now. Will says he wants to talk to Dr. Lecter.
He’s back at the river and the elk comes rising out of the water and it’s a man with antlers on its head…

At the FBI, Jack is grilled by Kade Prurnell (Sex and the City’s Cynthia Nixon!!) – an FBI honcho – on why he put Will in the field when Dr. Bloom said he was unstable. Bloom is there as well. He agrees that he knew he wasn’t well and Kade asks if he knew Bloom would be filing a report accusing him of misconduct.

Bloom speaks up and says it was a lapse in judgement – not intentional misconduct. Kade tells them she’s a Federal Examiner to determine if he harmed the FBI and says they want this all to go away. Kade asks Bloom to recant her report and she says Jack should be held accountable for destroying Will’s life and career. Kade tells Jack it’s going to get ugly and he says it already has.

Some workers are clearing debris they think are dead beavers from a river and turn up a dead body. They freak out understandably and stagger away in a hurry.

Hannibal tells Bedelia that Will wants to see him and admits that he’s curious. She says this shows his intent to try and manipulate Hannibal. But she also says she knows he wants to manipulate Will. Hannibal says he misses Will and she says he’s obsessed with him. He counters and says he’s intrigued and that will is a friend. She asks why he thinks he’s a friend.

He says that Will sees his own mentality as grotesque but useful and that honesty is admirable. Bedelia thinks he can relate to this and asks him what he’s struggling with.

At the mental hospital, Will sits in his cell, eyes closed, mind elsewhere when someone is buzzed in. It’s Hannibal. They greet each other. Hannibal asks if he’s lost in thought and Will says he’s not lost anymore. He says he used to hear his thoughts in his skull but says now his inner voice sounds like Hannibal. He says he can’t get Hannibal out of his head.

Hannibal says friendship can sometimes evolve this way and Will says they are not friends and are light years from friendship. Hannibal says it’s easier to blame him for the murders he committed than to acknowledge his own guilt and taking responsibility. But Will isn’t having it and says he’s clear on who Hannibal is. Will tells him that what Hannibal did to him is in his head and he’ll find it and remember it. He says when he does, there will be a reckoning. Hannibal tells him he has faith in him and always has.
[10:46:26 PM] Rachel Rowan: Hannibal sits for a DNA swab from Beverly. She also has some of his suits and he asks how long she’ll keep them. She tells him it’s just a formality and no one except Will expects to find any evidence. He tells her the evidence she found will convict Will. He tells her that her science is simpler than psychiatry. Beverly tells Hannibal he should have protected Will from himself but says they all should have seen the signs of what was happening. He makes a casual remark about being a suspect and she tells him he’s not and says he’s the new Will Graham (aka FB psycho profiler).

We see Hannibal crossing the crime scene line to meet Jack who says he needs his help with a profile. At the river site, they have found several bodies. Four so far and at least one more they haven’t fished out. He says they’ve been coated in some sort of resin to preserve their bodies. Jack says it seems to be a process that the killer is perfecting. Hannibal says they could be injected with silicone like you do when you preserve fish. They theorize that these are his discards and he hasn’t made a trophy worth keeping yet.

Hannibal signs a disclosure form that will allow Bedelia to discuss his therapy with Jack. She says the scope of the conversation should be limited. He tells her it’s important because of Will’s accusations. He tells her he saw Will today and then stood in his shoes at a crime scene today and saw death through his eyes.

Bedelia asks why he would invite the scrutiny of the FBI and he says he’s trying to be open and honest. She tells him that he is trying to look honest but is asking her to lie for him. He reminds her the lie isn’t just for his sake. She asks him how far his flirtation with the FBI will go. She tells him Jack Crawford doesn’t yet know what he’s capable of and Hannibal tells her that she doesn’t know either.

[10:54:26 PM] Rachel Rowan: Bloom jogs with Will’s dogs and plays with them in a field. She visits him at the hospital and he asks about the animals. She tells him Winston keeps running away and back to his house looking for him. Will tells her he won’t ever be back home. He keeps firing his lawyers because they are FBI affiliated and she promises to find him one. He asks what defense he thinks she has and she says he shouldn’t be guilty of acts committed while his mind was on fire with disease and can’t remember. He asks her what if he can remember how it was done to him.

Bloom tells him she doesn’t think he’s capable of that violence. Chilton eavesdrops on the conversation. Will tells her he keeps hearing Hannibal’s voice in his mind and asks her about helping him recover memories. She has a lighted metronome and uses it to hypnotize him. She tells him to imagine he’s in a safe, relaxing place. He sees her as shadowy figure that leans in to him and kisses him before breaking apart around him like pieces of a cloud.

He sees a squid and a large buffet table of odd food items and the elk with the man’s body at the head of it. He sees an ear on his dinner plate. He comes out of it, sweating and breathing heavy and Bloom asks what he saw.

Hannibal brings food to Chilton and says he’s challenging him with his vegan diet. Chilton reminds him that after he lost his kidney it’s necessary. Hannibal tells him he didn’t lose it, but it was taken. He tells Hannibal that Bloom came to see Will and he’s angry because Will won’t talk to him.

He tells him he’s a prize patient because of his brilliance and psychosis but he can’t get him to talk. He tells Hannibal about the hypnotism session to try and recover memories. Chilton tells him that Will tells everyone who comes to see him that Hannibal is a killer. He smiles and tells Chilton that he’s dining with a psychopathic murderer.

On the subway, one man tells another that he has nice skin. Later, the same guy is rousted from bed when his car alarm goes off. He comes out to click it off and looks around. He sees some plastic sticking out of his trunk. He looks at it and doesn’t notice the man that comes up behind him quietly…