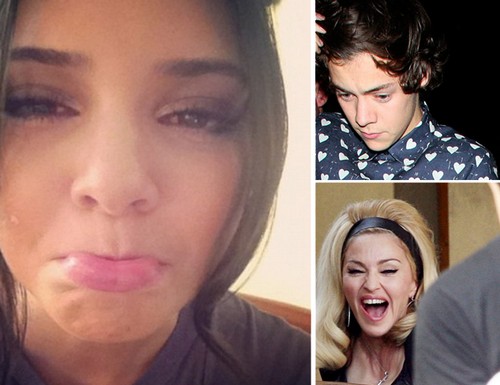 One Direction singer Harry Styles found himself in some hot water this weekend when a nude photo of him was leaked on Twitter and went viral. Before you begin scouring the internet in hopes of catching a glimpse of the infamous photo, you should probably be warned that it is not your average nude photo. The photo of Harry Styles (Hollywood Hiccups has the pic) that was leaked this weekend is actually a picture of him (from behind), urinating in 90’s rapper Sir-Mix-A-Lot’s bushes.

When the photo emerged on Twitter, Sir-Mix-A-Lot actually seemed honored that of all the bushes, One Direction singer Harry Styles chose his to relieve himself in. The 90’s rapper commented on the photo and said, “Who’s bushes you peeing in? Classic!!! Oh wait…that’s my house! Those are my bushes! Harry Styles pees in my bushes and my home value went up. I pee in my bushes and I get arrested. Lmao.” The photo was rumored to have been taken at a party Sir-Mix-A-Lot held at his house, but Sir-Mix-A-Lot is denying allegations that he released the photo, and claims he doesn’t even know the One Direction singer. Some of Harry Styles’ loyal fans think that this is just a desperate publicity gimmick on Sir-Mix-A-Lot’s part to link himself to the popular boy-band singer. Seeing as how he went out of his way to make sure Twitter knew those were his bushes that were getting violated by Harry Styles, I think I am going to have to agrees with the One Directioners on this on.

What is it with pop-stars relieving themselves in public? Just when the media was finally recovering from Justin Bieber’s “peeing in a mop bucket scandal,” Harry Styles goes out and urinates in Six-Mix-A-Lot’s front yard!