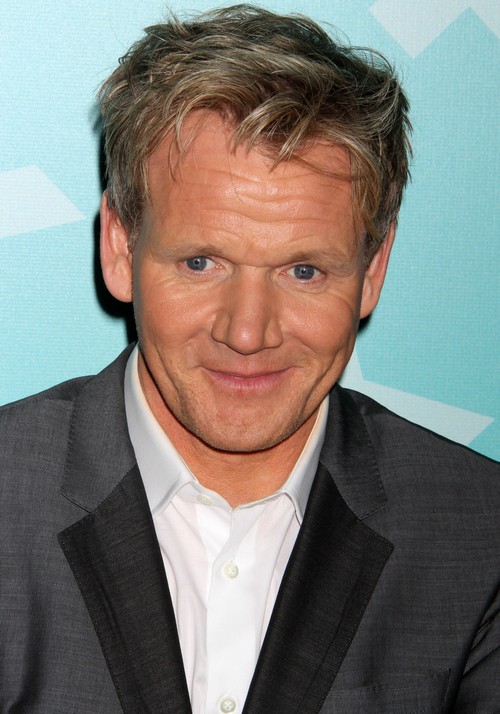 Some men are really sensitive about their hair and we have known for years that Chef Gordon Ramsay is one of them. Back in 2010 Ramsay was spotted wearing a black surgical cap after undergoing 12 hours of hair transplant surgery that cost a whopping $45,000. This time around Ramsay seems to be trying to cover his tracks a bit differently. According to the May 19th print edition of GLOBE magazine he recently turned up at Victoria Beckham’s 40th birthday party in London looking different.

Instead of his usually tousled look Ramsay appeared to be wearing a rug combed flat on the top of his head and the sides and back of it were shaved. The wig looked like it would fit Ramsay’s son far better than it fit him and there also appeared to be makeup slathered on around his hairline. If he was attempting to be discreet it was an epic fail. Ramsay would have been better off wearing a hat and if he did it right he might have avoided speculation all together.

Sources close to Ramsay say that replacing hair follicles is not only expensive but it also doesn’t last. The procedure needs to be repeated as he loses his own hair. That’s an awful lot of work to keep a tiny bit of hair on his head, don’t you guys think? Perhaps he should consider just shaving it all off once and for all. Do you think that Ramsay could pull off being bald? It would certainly be better than the rug don’t you think? Tell us in the comments below!