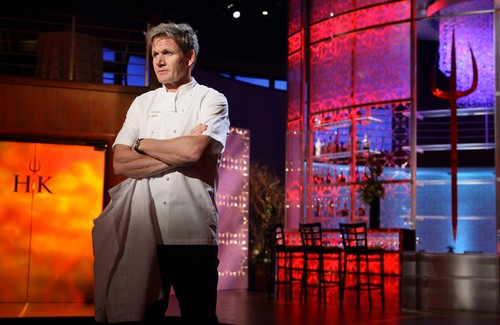 HELL’S KITCHEN returns to FOX tonight for the third episode of season 12.  In it the remaining 18 chefs compete in a physical challenge involving pigs and potatoes. The winners earn a luxurious day on a yacht, while the losers must bathe the livestock from the challenge.

On last week’s episode the 19 remaining chefs were challenged to a tricycle relay race, in which they had to work in pairs to complete basic culinary tasks. The winners earned a trip to San Francisco, while the losers went carrot picking at a farm.  The winners were the Blue Team, the men.  Service was so bad that Chef Ramsay thought bought teams lost and they both had to nominate two people.  However at the elimination  Chef Ramsay said there was one person who has showed him no passion and notleadership.  The Chef told NICOLE she had to leave the kitchen immediately.  She was pissed she threw him the jacket and said as she walks out, he can kick her fat ass. LOL…  The Chef told the remaining Chef they better do good or he is going to start getting rid of them faster.  Chef Ramsay then says he was not looking for a line cook but if he was he still would not hire Nicole, she was useless.  Did you watch last week’s episode?  If you missed it we have a recap right here for you.

On tonight’s episode Chef Ramsay teaches the chefs a lesson in teamwork when he puts them through a physical challenge involving pigs and potatoes, but the competition really heats up when the team competition continues in the kitchen. The winning team earns a luxurious day on a yacht while the losing team is tasked with bathing their new livestock friends. Later, a disorganized dinner service disappoints Chef Ramsay, and once again an entire team is kicked out of the kitchen.

Kashia is so glad Nicole is gone and thinks Chef Ramsay made the right decision.  After a tense night in the dorm the chefs are hoping for a quiet night but Chef Ramsay has other plans and at 5AM pigs run through the dorm.  They have to grab a pig and get downstairs.

Chef Ramsay wishes everyone good morning when they get out and they see a farm yard set up.  You may have the most amazing freshest protein in the pen but sometimes there is a side dish that steals the show.   Tonight they are going to work with Chef Ramsay’s favorite side potatoes.

3 chefs have to take turns digging up potatoes – the winner is the team who gets to 100lbs.  The catch is they have to dig in the farm yard Chef Ramsay has set up where there are cows and pigs running around.  The Blue team gets to 100 lbs first and the men think they have won the challenge.  But Chef Ramsay tells them to get into the kitchen for part 2.

Women win and they are going to get to see California’s beautiful coastline on a 80-ft sailboat.  The girls were having a great time seeing dolphins jumping around the sailboat.

The next day the teams got ready for a new day.  However, Rochelle was feeling super sick.  Simone says she is feeling shaky and dizzy the other contestants don’t buy it.  Medics come in to see her.

In the Blue Kitchen it is all hands on deck.  But wait DeMarco on the men’s team almost chopped his finger off.  The medics come in and they are sending him to Urgent Care.

Chef Ramsay comes in and asks where Simone is and the ladies tells him she is with the Medic.  Chef asks her if she is going to be there for Service.  She say yes and when she gets there Chef puts her on fish.

Both teams are eager to finish their first dinner service.  In addition to regular dinner Chef Ramsay has set up a Steak Diane to be served table side.  Joy wants to finish serive tonight.

Anton brings his risotto to Chef Ramsay and he tells him it is perfection.  Food is making it quickly out of the kitchen to happy diners.

Chris and Mike are having timing issues.

Simone brings lobster tails over to Chef Ramsay.  One is raw, Chef calls her over and asks her why she is there.  Simone continues to dig herself a bigger whole.

In the Men’s kitchen Demarco is back and he says he is good.  As Demarco gets up-to-speed on the meat station back at the Red Kitchen Simone and Jessica are doing their best to impress.

But they are not succeeding some of the scallops are raw.  Chef Ramsay start bellowing and asks Jessica and Simone wants to go home.

In the Blue Kitchen Chef Ramsay has moved on to Entrees.  Chris prepares the fish wrong and puts not crust.  Mike is just standing around.

In the Red Kitchen there are empty pans sitting around and Chef Ramsay is not happy.  The garnishes station is not running well.

In the Blue Kitchen the Chef is waiting for important chicken.  DeMarco could not get it together he forgot the bone in the chicken.

In the Red Kitchen Jessica and Simone hope the salmon is better but when they bring it to Chef Ramsay it is raw.  Chef Ramsay congratulates them on being the worse fish station chefs ever.

It is two hours into dinner service but even thought Simone and Jessica have delivered raw fish Simone finds it funny.  Chef Ramsay got so bad he kicked Jessica and Simone out of the kitchen.

Back in the Blue Kitchen issues of timing continue to plague the men.  Chef Ramsay gets mad at the men and throws them all out of the kitchen.  This is the third service that they have gotten thrown out.

In the Red Kitchen the first thing they brought up was perfect, then the fish was brought up and it was undercooked.  Chef Ramsay got so mad he threw the women out too.

Chef Ramsay tells the contestants that it was the most embarrassing service ever.  He tells the remaining Chefs that he wants 3 nominees from each team.  He tells them to make it quick.

The women bicker about who to nominate but the men really get into it almost coming to blows.

Chef Ramsay says good night to Simone she has been eliminated.  Chef sends Mike and DeMarco back in line.  He tells everyone to get out.