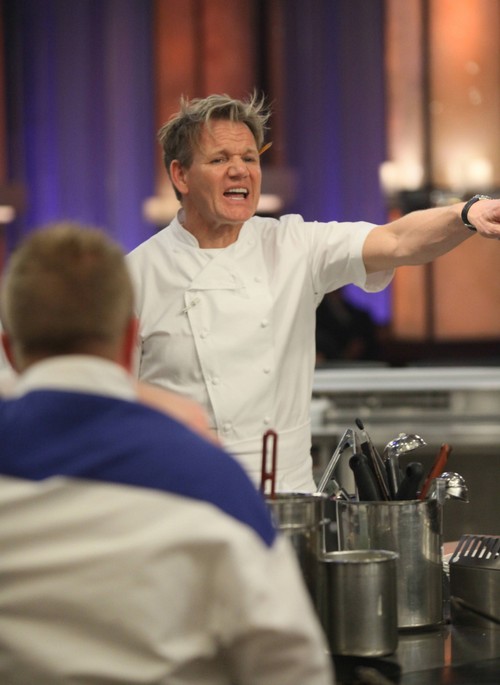 HELL’S KITCHEN returns to FOX tonight for the fifth episode of season 12 called, “16 Chefs Compete.”  In it The 16 remaining chefs are challenged to match side dishes with four different types of protein. The winners earn a trip to Laguna Beach, while the losers prepare honey taffy from scratch.

On last week’s episode Chef Ramsay challenged the contestants to an intense team competition involving lobster ravioli. The first team to successfully create 10 perfect plates of lobster ravioli would win a relaxing day by the pool at a luxurious Beverly Hills mansion, while the losing team had to spend the day cleaning the kitchen. Later, the competition heated up as contestants prepared a steak dinner for hungry diners. While some rise to the top, others struggled to make it make the appetizer, and Chef Ramsay grilled the losing team.  Did you watch last week’s episode?  We did and we recapped it right here for you.

On tonight’s episode Chef Ramsay puts the contestants to the ultimate memory test when he challenges the red and blue teams to match side dishes with four different types of protein. The team that pairs the dishes successfully wins a day trip to Laguna Beach, while the losing team spends the day preparing honey taffy from scratch. Later, the contestants get an early wake-up call to prepare a breakfast reception for the first-ever HELL’S KITCHEN wedding. While some contestants rise to challenge, others scramble to complete the simplest dishes, resulting in an emotional elimination round.

Coming off their most embarrassing defeat yet – the Blue Team are surprisingly at their most optimistic. Mike was bringing them all down and now that he’s gone they feel like they have a real chance of finally beating the girls. While the girls have honestly begun to get cocky. They’re hoping to keep up their winning streak and feel like they have this in the bag.

Although Chef Ramsey’s weekly challenges might just trip them up. This week the team have to undergo a memory test. Melanie has admitted that memory tests tend to get to her, but its Beth that starts to crack under pressure. Even with her team helping her from the sidelines; she became unsure of herself and had wasted precious time.

The teams had five minutes match side dishes with four different types of protein and afterwards Chef then demanded they cook up four great tasting meals. And like they did with the matching game, the teams were supposed to have remained paired off. However Chris didn’t so much care to work with DeMarco. Not as long as he believed that he could do a better job of preparing a delicious dish on his own.

On the other side with the Red Team – Rochelle was scared how her polenta was going to work out. Though she did get some help from Melanie and together they created a delicious meal that Chef Ramsey especially enjoyed.

Once the dishes were ready to be inspected; it started off as a close race. Each side was doing well until Chris’s dish gave the men a leg up. But unfortunately Scott put hollandaise sauce on fish which as it runs out was big no no for the Chef. So once again the Blue team lost.

As their punishment – they were forced into beekeeping. And no that wasn’t a joke. They will in fact be working with live and dangerous bees. Just so they can create honey taffy from scratch.

The girls on the other hand got to enjoy an afternoon at Laguna Beach. Some went canoeing and Kashia soaked up the sun on shore. Then with their day at the beach over, the ladies were treated to fine dining and an amazing sunset view.

The men didn’t enjoy their task or their lunches for that matter, but they did start communicating with each other and that got DeMarco to open up about his own life. He told the guys about his dad walking out on him when he was a baby and it appears to still be a raw subject for him. DeMarco can only dream of his father calling him one day just so he can tell the other man “look at what I achieved without you”.

Later the two teams were slow to waking up for their new day of work. And chef had to call them to get moving.

Today isn’t going to be like any other challenges they’ve had. Not only is it elimination challenge but the teams will also be cooking a breakfast based menu for some unfortunate couple’s wedding reception.

Joy thought her team would consider this a cake walk but then she hadn’t counted on Beth. Beth kept messing up her dish and despite Kashia doing her best to help her teammate – Beth’s dishes kept coming out either raw or burnt. So Joy took Beth to task. She told her to get her act together and that broke out into a small fight between them.

Chef decided to step in at this point and he told both Beth and Kaisha to get it together. He was tired of getting raw eggs. And that’s truly all he’s been getting from both teams. So every time he had to send a plate back it caused a delay until there ended up being an hour long wait or the bride and groom.

The teams soon got a handle on keeping up with dishes yet both sides were completely disorganized and Chef Ramsey was disappointed in them. This was the worst showing he’s ever seen them give.

The Red team won though it doesn’t count for much with Chef right about now.

When the Blue team went off by their selves – they had to discuss who would be put on the chopping block and Ralph said DeMarco. Well, DeMarco isn’t taking that lying down. He said it wasn’t his fault the dish (eggs) was raw because he had told everyone it was still too raw and Ralph was the one that told him it didn’t matter and give it to Chef.

Sadly for him the truth didn’t matter to his team and he was still put up for eliminatoion. Along with Gabriel who was tad too slow in the kitchen. But Chef said that there was one more person that needed to be down there with them – so he called forth Richard. Gabriel wasn’t the only person that was slow.

Chef wanted them to persuade him on why they should stay but by that point he was tired of seeing DeMarco and quickly asked the other man to hang up his coat. Demarco was given too many chances and Chef had had enough.