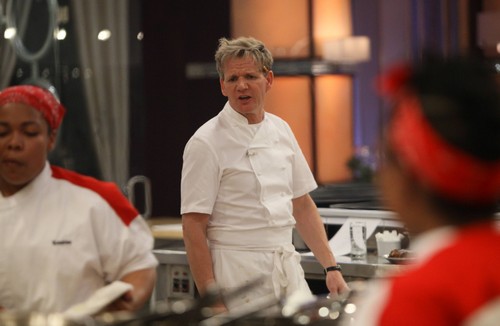 HELL’S KITCHEN returns to FOX tonight for the ninth episode of season 12 called, “11 Chefs Compete.” On this evening’s episode The Top 11 chefs compete. The teams are brought to a Gordon Ramsay eatery and must prepare the restaurant’s inspired meals. The members of one team struggle to communicate, forcing them out of the kitchen and putting several of their chefs up for elimination.

On last week’s Chef Ramsay In the ultimate adaptability challenge, contestants from the Red and Blue teams were given 30 minutes to shine, as each team member must create an entrée with four surprise ingredients in a hidden dome challenge. Chef Ramsay and VIP guest judge, Chef Michael Cimarusti, determined which team will be treated to a beachside lunch and volleyball lesson with Kerri Walsh Jennings and which team will stay behind to do the kitchen chores. Later, tensions rose as Chef Ramsay announced it is time for 1:1 performance evaluations. Then, for the first time in HELL’S KITCHEN history, Chef Ramsay pits the lowest-ranking chefs from each team against each other, beginning an emotional elimination round.  Did you watch last week’s episode?  If you missed the episode we have you covered with a full and detailed recap, right here for you.

On tonight’s episode after a dramatic elimination, Chef Ramsay starts the day with a surprise field trip to a Gordon Ramsay restaurant, welcoming them into a kitchen that one day could be theirs. Later, the Red and Blue teams must prepare the restaurant’s inspired meals. While one team leads the way, the other team struggles to communicate and is eventually kicked out of the kitchen,

Tonight’s episode of Hell’s Kitchen picks up where we left off last week, Chef Ramsey is about so decide whether Red Team’s Jessica or Blue Team’s Richard will be going home. Based on the three dishes and their performance evaluations, Chef Ramsey decides to send home Jessica. Jessica begins sobbing and turns in her coat to Gordon before leaving the kitchen. Gordon sends the chefs upstairs and tells them to get some rest because they have “one hell of a day tomorrow.”

The chefs all head to bed, however Ralph gets a grand total of two hours asleep. His roommate Gabriel is “cutting acres and acres of wood” with his snoring. Bright and early they receive a phone call instructing them to come downstairs where there are cars waiting for them. They pile into the SUV’s and head to Ramsey’s pub in Los Angeles where Gordon is waiting for them. Ramsey passes out the menus to the chefs so they can check them out, and the operator of the restaurant gives them a tour of the kitchen to inspire them to one day run a restaurant of their own.

Feeling inspired by their field trip, the chefs head back to the house. They head down to Hell’s Kitchen and begin preparing the menus for the dinner tonight which will be inspired by the Gastro Pub menu. Ralph begins feeling faint, he blames it on lack of sleep, and the medic takes him back behind the kitchen to examine him. The medic sends Ralph upstairs to lay down and rest, and the Blue Team begins stressing about how they will complete the task short a chef. Gabriel heads back upstairs after a bit and brings Ralph down. Ralph says he is “fine to work.”

For tonight’s special dinner service the guests begin arriving, excited to feast on the Gastro Pub inspired sliders, fish and chips, and other meals. The dinner rush begins, and the Blue Team is having some serious problems putting the dishes together because Anton and Jason are feuding.

In the Red Kitchen the women are struggling since they are short a member of their team. The women have nailed their appetizers and it is time for them to begin preparing their entrees. Kashia gets under Chef Ramsey’s skin when she appears to be eating more than the customers. Chef Ramsey screams at her to “stop stuffing her face.”

Meanwhile, Anton, Jason, and Gabriel are not cooking any food and in the middle of a screaming match. Ralph is “sick as a dog” and in a world of trouble – because he apparently tried to serve a dish with raw fish in it. The diners on the Blue Team’s side of the restaurant are beginning to walk out because they have been waiting over half an hour for their entrees.

Chef Ramsey sends the Blue Team upstairs and tells them to nominate two of their members for elimination, after a heated argument they decide to nominate Scott and Gabriel for nomination. They head downstairs and reveal that they nominated Scott and Gabriel. Gabriel is furious, he doesn’t think he should be nominated, he tells Chef Ramsey that he thinks Ralph should be up for elimination. Chef Ramsey agrees, and tells Gabriel, Ralph, and Scott to come forward.

Gabriel, Ralph, and Scott speak their peace and tell Chef Ramsey why they think they should stay. In a shocking twist, Ramsey eliminates Ralph.