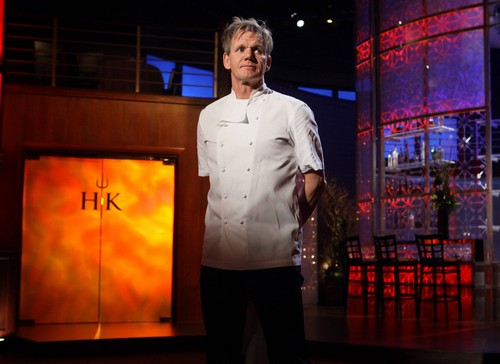 HELL’S KITCHEN returns to FOX tonight for the eleventh episode of season 12 called, “10 Chefs Compete.” On this evening’s episode ten chefs remain and are tested on their knowledge of pork. The winning team participates in indoor skydiving, while the losing team prepares for the dinner service. Later, both teams struggle to finish the dinner service and are forced to work together.

On last week’s episode after a dramatic elimination, Chef Ramsay started the day with a surprise field trip to a Gordon Ramsay restaurant, welcoming them into a kitchen that one day could be theirs. Later, the Red and Blue teams had to prepare the restaurant’s inspired meals. While one team lead the way, the other team struggled to communicate and was eventually kicked out of the kitchen.  Did you watch last week’s episode?  If you missed it we have a full and detailed recap, right here for you.

On tonight’s episode after an emotional elimination, Chef Ramsay challenges the contestants to a team competition testing their knowledge of pork. The winning team is rewarded with an indoor sky-diving experience, while the competition gets nuts for the losing team as they prepare for the dinner service. Later during the dinner service, the competition heats up as one team struggles to divide responsibilities in the kitchen while the other team is unable to coordinate timing and food delivery. With both teams unable to successfully complete the dinner service, Chef Ramsay challenges the contestants to work together.

Tonight’s episode of Hell’s Kitchen kicks off with the chefs heading back upstairs after Ralph’s elimination. The Blue Team are all furious over Gabriel’s stunt, he told Chef Ramsey Ralph was up for elimination, when he actually wasn’t.

The next morning the Red Team and the Blue Team head down to the kitchen to meet with Chef Ramsey. He reveals their challenge for the day. There are two huge gake pigs sitting in the kitchen, and each team must take a stack of cards listing the “cuts of pork” and place them on the corresponding part of their fake pick. Both teams finish their cards at the same time, however they both have two cards wrong. They rush to fix their mistakes, and the Blue Team wins the challenge.

Since the Blue Team won they get to choose which cut of pork they will cook with and which chef they are going to go up against on the Red Team. They make their decisions and they all have forty-five minutes to “cook a stunning dish.”

Gabriel is going up against Joy and cooking ribs and he knows he “is going to demolish her.” Joy isn’t worried though, despite the fact that Gabriel is from Texas.

Scott is making a brave decision and decides to make pork ravioli from scratch. There are less than twenty minutes remaining and he is stillusing the pasta maker.

It’s time for the chefs to present their dishes to Chef Ramsey. Melanie and Anton go first, and Gordon is not impressed with Anton’s presentation. He says it looks like “dog food,” and he gives the point to the Red Team. Richard and Rochelle present their pork loins next, and another point goes to the Red Team. Gabriel and Joy present their ribs next, and Gabriel scores a point for the Blue Team. Jason and Sandra present their pork belly next, and another point goes to the Blue Team. The teams are currently tied and it is up to Scott and Kashia. They bring up their plates of pork cheeks and Chef Ramsey loves Scott’s ravioli. The Blue Team wins the competition.

Chef Ramsey reveals that since they won the competition the Blue Team will be sky-diving indoors today. The Red Team lost, so they must send the day cracking, shelling. And grinding peanuts and making peanut butter.

The Blue Team heads to their destination. They each take turns climbing into a tunnel that blows up a stream of 100 MPH winds and elevates them. They return home and find gifts from Chef Ramsey, they all are rewarded with a top of the line Vita Mix blender.

It’s time for Hells Kitchen to open, and guests begin arriving. The Red Team and Blue Team begin preparing their orders. The Blue Team is off to a good start and getting all of their appetizers out. The Red Team is struggling, and Joy and Sandra are feuding over the lobster tails. Anton and Scott are having similar problems and fighting over the fish station, Scott is trying to help Anton, but just getting in his way.

Halfway through the entrees the Blue Team begins falling apart and has another screaming match in the middle of the dinner rush. Chef Ramsey locks them all in the pantry together, and tells them to “have a meeting and sort their shit out.” Anton makes it clear that he doesn’t want Scott helping him at the fish station. The Red Team is falling apart as well, Sandra isn’t communicating with her teammates and trying to send dishes without the sides because she doesn’t want to wait on her team. Both teams are having serious problems with their salmon, and over-cooking it. Despite all of the drama the Red Team and the Blue Team manage to finish up the dinner rush. Afterwards Chef Ramsey tells them that neither team won, and the Red Team and Blue Team both have to put up two members of their team.

Rochelle, Sandra, Scott, and Anton plead their case to Chef Ramsey. Chef Ramsey tells all four of them to take their jackets off. Instead of eliminating anyone he decides to put Rochelle and Sandra on the Blue Team, and Scott and Anton on the Red Team.