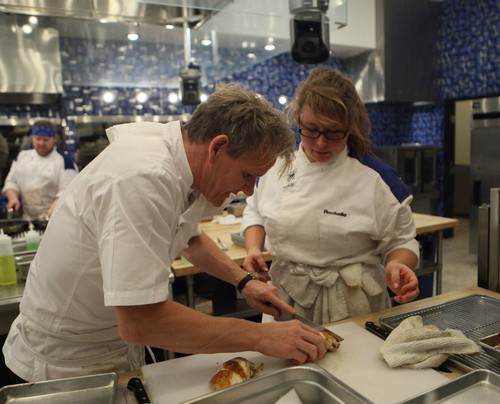 HELL’S KITCHEN returns to FOX tonight for another episode of season 12 called, “8 Chefs Compete.” On this evening’s episode the remaining eight chefs are challenged to a blind taste test. The team that correctly identifies the most ingredients wins an ice-skating lesson with Olympian Rachael Flatt, while the losing team prepares homemade ice cream for the next dinner service.

On last week’s episode following a disappointing dinner service and contestant elimination, Chef Ramsay asked each team to create their own restaurant menu for the battle of the menus challenge.  Dining guests had the option to order either the Red or Blue team menus. The team with the most popular menu and that successfully served their dishes won the dinner service challenge. Although both teams finished strongly, one team impressed the dining guests more, and the losing team had to present two contestants up for elimination. The Blue Team puts Richard and Gabriel up for elimination. Chef Ramsey officially eliminates Richard, and tells him to turn in his coat. The Red Team sends Melanie over to the Blue Team to join Gabriel, Jason, and Rochelle.  Did you watch last week’s episode?  If you missed it we have a full and detailed recap, right here for you.

On tonight’s episode after members of each team change up once again, Chef Ramsay challenges the remaining eight contestants to a HELL’S KITCHEN classic: the blind taste test. The team that correctly identifies the most ingredients wins an ice skating lesson with former U.S. National Champion and Olympian figure skater Rachael Flatt, while the losing team chisels down ice blocks and prepares homemade ice cream for the next dinner service. Later during the dinner service, contestants struggle to stay organized in their stations and temperatures flare when one team is unable to work together. As one team completes one of the most successful dinner services this season, another team must put two contestants up for elimination

Tonight’s episode of Hell’s Kitchen kicks off with where we left off last week, after Richard turns in his coat and is eliminated the Red Team and Blue Team head upstairs. Melanie is excited to be the newest member of the Blue Team. She thinks that it will give her an opportunity to prove that no matter which kitchen she is in she will excel.

The next morning, the Red Team and Blue Team head downstairs to meet with Chef Ramsey. He presents the chefs with four dishes of spaghetti, cake, a sundae, and tuna. The chefs taste them and realize they are actually made of totally random ingredients. Chef Ramsey reveals it is time for the blind tasting test.

After sending the afternoon on their butts trying to ice skate, the Red Team returns to Hell’s Kitchen limping to prepare dinner services. Joy is annoyed because Anton has no idea where anything is located (in his defense he was previously a member of the Blue Kitchen). In the Blue Kitchen the team is concerned about how mopey and depressed Gabriel is acting. Chef Ramsey calls Gabriel in to the pantry and gives him a pep talk and tell him that he hasn’t given up on him and he would like to see him rise in the competition and not give up.

The kitchen is opened and the guests begin arriving. The orders begin rolling in and Chef Ramsey is impressed with the Red Team’s lobster risotto. Unfortunately, the Blue Team is falling apart and Melanie and Jason are having a tough time adjusting to working together.

Halfway through entrees the Red Team begins falling apart when Kashia overcooks the salmon. Instead of taking what Chef Ramsey has to say with a grain of salt she begins arguing and talking back to him and muttering under her breath. Scott gives her a pep-talk and reassures her that she is doing fine.

In the Blue Kitchen Rochelle is having an issue with undercooked chicken. However, Gabriel seems to actually be on track tonight and Chef Ramsey compliments his work. Anton unfortunately undercooked his chicken as well, however Scott is the one that sliced it and put it up. Joy is sick of Scott and Anton, she thinks they are “worthless.” The Blue Team on the other hand is working in harmony tonight.

The Red Kitchen crashes and burns when Anton overcooks the Wellingtons twice in a row. He blames his mistake on the difference in temperatures of the ovens in the Red Kitchen and the Blue Kitchen, since he just switched teams. He winds up getting in a screaming match with one of Chef Ramsey’s assistants. Chef Ramsey intervenes and takes Anton in the pantry; he screams at Anton to “get it together.”

Chef Ramsey heads to the Blue Kitchen and compliments that Blue Team on having one of the best services he has ever seen. Melanie is confident that the reason the Blue Team is doing so well is because she has joined the team. Once the final plate is served and the guests have left the Red Team heads upstairs to bicker over who they will be putting up for elimination.

The chefs head back down to Hell’s Kitchen and Joy informs Chef Ramsey they are putting up Scott and Anton for elimination. To everyone’s relief Chef Ramsey tells Scott to turn in his coat and sends him packing.