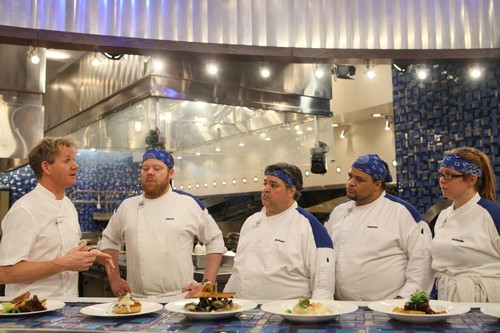 HELL’S KITCHEN returns to FOX tonight for the another episode of season 12 called, “9 Chefs Compete.” On this evening’s episode the teams create their own menus for the dinner service, and the group with the most popular menu wins the challenge and is safe from elimination.

On last week’s episode after Chef Ramsay reorganized the members on the Red and Blue teams, contestants had to learn to trust their senses – and each other – as he challenged contestants to a “dark grocery store” challenge. Each contestant blindly chose his/her ingredients and had to create a unique dish that used all of them. The contestant with the best dish won the challenge, as well as a day full of pampering at a Beverly Hills spa for his/her entire team, while the losing team unloaded the dinner service deliveries. Later, Chef Ramsay announced that they will be serving a five-course meal to VIP attendees from UNICEF, including actress and UNICEF ambassador Angie Harmon (“Rizzoli & Isles”). Both teams struggled to deliver the dishes on time; the chefs headed back down to the kitchen at the end of service and reveal that they have nominated Kashia, Scott, Sandra, and Gabriel. Chef Ramsey officially eliminates Sandra from Hell’s Kitchen.  Did you watch last week’s episode?  If you missed it we have a full and detailed recap, right here for you.

On tonight’s episode following a disappointing dinner service and contestant elimination, Chef Ramsay asks each team to create their own restaurant menu for the battle of the menus challenge. After each team presents their menus and dishes to Chef Ramsay, they begin preparing for the next dinner service. Dining guests will have the option to order either the Red or Blue team menus. The team with the most popular menu and that successfully serves their dishes wins the dinner service challenge. Although both teams finish strongly, one team impressed the dining guests more, and the losing team must present two contestants up for elimination.

Tonight’s episode of Hell’s Kitchen kicks off with where we left off last week. After Chef Gordon eliminated Sandra, the Red Team and the Blue Team head back upstairs. Despite Kashia’s temper tantrum before eliminations, she and Melanie talk out their differences and make amends.

The next day the chefs receive a package from Chef Ramsey. The Red Team and the Blue Team both receive a blank menu, and the chefs have to choose what foods they are serving and design the menus. They only have on hour. The Red Team is having issues working with Anton and getting him to agree with the dishes, but the Blue Team is chugging right along without any problems.

The Blue Team is growing frustrated because Rochelle won’t participate with the menu, and the Red Team finally decides to go with fried chicken as an entrée, despite Scott’s wishes. The last time they served fried chicken it was a disaster and they burnt it and served it raw.

Chef Ramsey comes down and tastes all of their sample dishes to approve their menus. He is disgusted when Rochelle serves him a burnt crab cake. She argues that she didn’t want to waste it and throw it away and cook another one as a sample. Gordon yells at her and takes her glasses from her and asks her if she is blind, because nobody that can see would serve a burnt crab cake. After Chef Ramsey leaves the kitchen Rochelle breaks down in tears, and Jason yells at her. She winds up storming out of the Blue Team’s kitchen.

Rochelle pulls herself together and heads back to the kitchen to help her teammates prepare the appetizers. The orders start rolling in, and the Blue Team’s menu is much more popular than the Red Team’s. While Rochelle scrambles around preparing risotto in the Blue Kitchen, the chefs in the Red Kitchen stand around bored waiting for orders.

Melanie prepares the scallops with Anton’s recipe, and when she bakes them incorrectly, when Chef Ramsey asks her what she is doing she throws Anton under the bus and blames him. She prepares a second batch of scallops and then sends them to the table. A few moments later the dish is returned because the customer complained that the scallops were raw. Melanie begins panicking and tries to make another plate of scallops, but realizes they are out of scallops. Anton helps Melanie track down some scallops and prepares a third round of the appetizer.

The Blue Kitchen is having some issues with their garnishes. Jason comes to the conclusion that he and Rochelle are carrying the Blue Team, and Gabriel and Richard are useless. Gabriel tries to serve raw steak twice, but Chef Ramsey catches the bloody meat at the last moment both times.

Meanwhile in the Red Kitchen Kashia redeems herself after last week’s fiasco and receives nothing but praise from Chef Ramsey. In the Blue Kitchen, Rochelle takes over for Richard at the garnish table.

After dinner is finally completed Chef Ramsey complements both teams, and declares the winning team is the Red Team. He tells the Blue Team to head upstairs and put two people up for elimination, and the Red Team has to choose one player to send over to the Blue Team.

The Blue Team puts Richard and Gabriel up for elimination. Chef Ramsey officially eliminates Richard, and tells him to turn in his coat.

The Red Team sends Melanie over to the Blue Team to join Gabriel, Jason, and Rochelle.