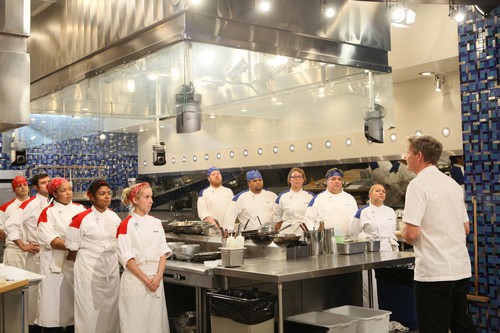 HELL’S KITCHEN returns to FOX tonight for the another episode of season 12 called, “10 Chefs Again.” On this evening’s episode the teams are reorganized and challenged to create dishes using ingredients they blindly chose. The winning team receives a day of pampering at a spa, while the losing team unloads deliveries. Later, the teams prepare a meal for UNICEF representatives.

On last week’s episode after an emotional elimination, Chef Ramsay challenged the contestants to a team competition testing their knowledge of pork. The winning team was rewarded with an indoor sky-diving experience, while the competition got nuts for the losing team as they prepared for the dinner service. Later during the dinner service, the competition heated up as one team struggled to divide responsibilities in the kitchen while the other team was unable to coordinate timing and food delivery. With both teams unable to successfully complete the dinner service, Chef Ramsay challenged the contestants to work together.  Did you watch last week’s episode?  If you missed it we have a full and detailed recap, right here for you.

On tonight’s episode after Chef Ramsay reorganizes the members on the Red and Blue teams, contestants must learn to trust their senses – and each other – as he challenges contestants to a “dark grocery store” challenge. Each contestant blindly chooses his/her ingredients and must create a unique dish that uses all of them. The contestant with the best dish wins the challenge, as well as a day full of pampering at a Beverly Hills spa for his/her entire team, while the losing team unloads the dinner service deliveries. Later, Chef Ramsay announces that they will be serving a five-course meal to VIP attendees from UNICEF, including actress and UNICEF ambassador Angie Harmon (“Rizzoli & Isles”). Both teams struggle to deliver the dishes on time, and Chef Ramsay asks for both teams to present contestants for elimination. Find out which contestant leaves the kitchen for good

Tonight’s episode of Hell’s kitchen kicks off right where we left off last week. The Red Team and the Blue Team are not happy with the recent team changes. Anton is not happy to be on the Red Team, it’s been over ten years since he was worked with a girl in the kitchen, let alone three.

The next day the chefs head down to the kitchen, for their next challenge. The chefs will each have to head into a mock grocery store, which is completely dark and use their sense of touch and smell to grab five ingredients in under sixty seconds. Each chef begins their shopping trips. Rochelle got lucky and managed to grad a steak, Kashia on the other hand grabbed squid. Gabriel screwed up and only grabbed four ingredients instead of five, Chef Ramsey tells him he will “have to make do.”

After all of the chefs have gone shopping in the dark Chef Ramsey gives them 30 minutes to put together a dish with the five ingredients they blindly grabbed. When the time is up and their dishes are prepared, Chef Ramsey reveals he will be judging them “King Of The Hill” style. Gabriel presents his dish first, and forgets to put the mousse on it. Chef Ramsey is so disgusted he tells him he isn’t even allowed to sit in the chair. Scott presents next, and Chef Ramsey tells him to go sit in the chair. Sandra presents her tuna yet, and Chef Ramsey tells her to go replace Scott in the chair. Anton presents his pork chop next, and replaces Sandra in the chair. Rochelle shares her steak next, and replaces Anton. Joy and Richard both present their dishes and they aren’t good enough to beat Rochelle’s steak. Melanie is the final chef to present her halibut, unfortunately Chef Ramsey doesn’t think it is better than Rochelle’s. Rochelle and the Blue Team win the challenge.

The Red Team heads back to Hell’s Kitchen after their massages, and find out they are due back in the kitchen. Chef Ramsey shocks the chefs and announces that Hell’s Kitchen is closed to the public. They are holding a charity event in honor of UNICEF, there are going to be two tables of twelve guests, and special guest Angie Harmon. They will be serving a very special five course meal, and each chef will be responsible for their own course.

The chefs begin preparing their courses, and Anton immediately smokes out the Red Team’s kitchen. In the Blue Kitchen Rochelle and Gabriel are bumping heads. Rochelle and Gabrial both get the risotto out on time with no difficulties. Melanie gets the Red Team’s tuna entrée out in perfect time. However in the Blue Kitchen Gabriel screws up and doesn’t cook enough tuna, once again he miscounted. Rochelle scrambles to help Gabriel cook up the rest of the tuna. Kashia has a meltdown in the Red Kitchen when her tortellini is under-cooked, and it was her responsibility to oversee the course.

Once again Gabriel screws up again and miscounts the number of plates on the counter, the Blue Team has some serious drama over the tortellini. Next up each team has to prepare their racks of lamb, Sandra overcooks the lamb and argues with Chef Ramsey about how much longer they need to cook. Both teams manage to get their final courses out on time, but morale is low after all of their mistakes.

After the guests leave Chef Ramsey sends the teams upstairs and tells them to decide which two chefs are going up for elimination on each time. Kashia volunteers to go up for elimination. Then she proceeds to get in a screaming match with Melanie and blames her for not testing the tortellini.

The chefs head back down to the kitchen and reveal that they have nominated Kashia, Scott, Sandra, and Gabriel.