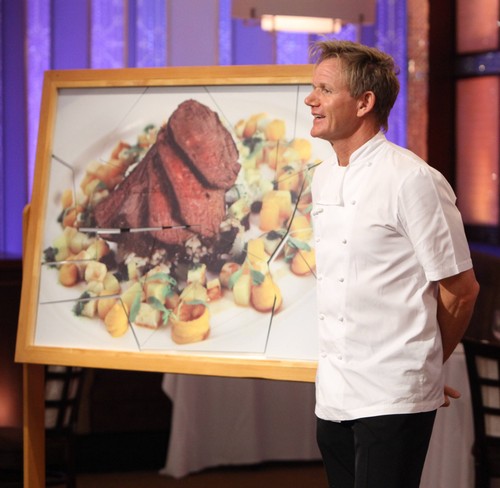 HELL’S KITCHEN returns to FOX tonight for another episode of season 12 called, “7 Chefs Compete.” On this evening’s episode the seven remaining chefs are challenged to produce a high-quality meal on a small budget. The winning team wins a shopping spree, while the losing team must clean the dorms. Also: Former winners return to judge the contestants.

On last week’s episode after members of each team were changed up once again, Chef Ramsay challenged the remaining eight contestants to a HELL’S KITCHEN classic: the blind taste test. The team that correctly identified the most ingredients won an ice skating lesson with former U.S. National Champion and Olympian figure skater Rachael Flatt, while the losing team chiseled down ice blocks and prepared homemade ice cream for the next dinner service. Later during the dinner service, contestants struggled to stay organized in their stations and temperatures flared when one team was unable to work together. In the end, Chef Ramsey told Scott to turn in his coat and sent him packing. Did you watch last week’s episode?  If you missed it we have a full and detailed recap, right here for you.

On tonight’s episode with seven contestants remaining, Chef Ramsay puts the Red and Blue teams to the test in the grocery store. Each team must purchase ingredients under a small budget, in hopes of producing three entrees with the highest dollar value. The team that achieves the greatest profit wins a shopping spree, while the losing team must clean the dorms. For the next challenge, Chef Ramsay welcomes three former HELL’S KITCHEN winners to judge each contestant’s entrée. This time, each person is competing individually for the chance at the black jacket and immunity from elimination.

Tonight’s episode of Hell’s Kitchen picks up right where we left off last week. Anton has just been eliminated by Chef Ramsey and the rest of the chefs head back upstairs. The next morning, the final seven chefs receive a phone call ordering them to head downstairs…there are cars waiting for them.

The chefs head to a market where Chef Ramsey is waiting for them. Each team will receive $35 to buy ingredients to create three entrees, their entrees will be judges by Chef Ramsey. The Blue Team’s total comes to $34.61 and the Blue Team squeaks by with $34.82. Both teams head back to the kitchens to prepare their meals.

The Blue Team is struggling to prepare a Cornish hen and only have 15 minutes remaining, and haven’t even put the hen in the oven. With only two minutes remaining, Joy realizes that her pork is still raw. Time is up and Chef Ramsey orders everyone to put their plates up for tasting. Joy hands over her plate and begins crying because the pork is still raw. Chef Ramsey gives her a pep talk and tells her to pull herself together.

Chef Ramsey reveals he has invited an esteemed panel of judges to taste their plates, the panel includes Krista Simmons, a Yelp reviewer, and Brent Burkowitz. Chef Ramsey and his panel sit down at the judging table and Jason brings forth his Cornish hen. Jason earns $20.00 for his hen.

Chef Ramsey reveals that the winning team is going on a $1,000.00 shopping spree and then heading to Hatfields Resturant in Los Angeles. The Red Team celebrates and runs upstairs to get ready for their shopping spree. Chef Ramsey reveals that the Blue Team will spend the day doing spring cleaning at the dorms. While the Red Team splurges at the Grove, the Blue Team begins scrubbing the toilets. The dorms are so disgusting Rochelle vomits while she is trying to clean the bathrooms.

The press and previous chefs leave, and Gordon Ramsey reveals to the remaining seven chefs that whichever one of their dishes is chosen for the calendar will receive a black jacket and be safe from elimination. This is the chef’s first individual challenge, Chef Ramsey gives them 45 minutes to complete their dishes and then he will judge them and choose which one will go in the calendar.

The chefs begin scrambling around and choosing what dishes they will cook for the challenge. Joy decides to push herself and try to make duck breast. Gabriel and Melanie both decide to cook lamb chops. Scott settles on buttered crab. Kashia has a catastrophe and over cooks her squash, and meanwhile Melanie makes a big no-no and uses flour in her mashed potatos. The chefs have 15 seconds remaining and Gabriel is concerned that his lamb isn’t cooked through.
Time is up and it is time for the chefs to serve their dishes, Chef Ramsey has Dana, Rock, and Paul judge their dishes and score them on a scale of 1-5. Jason serves his stuffed halibut first; he scores a total of 8. Kashia serves her dish of lamb next and the judges give her a score of 11. Rochelle presents her dish next and the judges give her a score of 13. Scott presents a plate of sea scallops; the judges give Scott a score of 11. Melanie presents a marinated rack of lamb to the judges, and they are disgusted when they realize the mashed potatoes have raw flour in them; they give her a score of 5. Gabriel is next to present his dish; the judges give him a sore of 0. Joy is the final chef; she brings up her duck breast. Unfortunately, we have to wait until next week to find out Joy’s scare was.