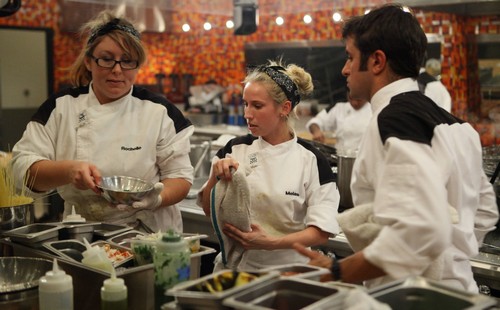 HELL’S KITCHEN returns to FOX tonight for another episode of season 12 called, “5 Chefs Compete.” On this evening’s episode the Top 5 chefs prepare dishes using only leftover ingredients. The winning contestant is featured in Better Homes and Gardens and gets a flight session on a private jet. The remaining contestants prepare for dinner service with comic creator Stan Lee.

On last week’s episode after Chef Ramsay handed out the final black jackets, the remaining six chefs headed to the University of Southern California to prepare tailgate fare for hungry football fans. The chefs who earned the most fan votes were treated to an exquisite lunch in Malibu, complete with wine tasting, while the other chefs returned to HELL’S KITCHEN to separate trash on recycling day. Later, tempers flared during the first black jacket dinner service, and two of the weakest links were put up for elimination. Chef Ramsey decides to eliminate Kashia and send her home. Did you watch the last episode? If you missed it we have a full and detailed recap, right here for you.

Tonight’s episode of Hell’s Kitchen kicks starts off where we left off last week, Kashia has just been sent home, and the remaining five chefs head back upstairs. Joy and Melanie lay down in their room and talk about how excited they are to be in the Top 5.

The next morning the remaining five chefs head downstairs and find the kitchen full of trash, Chef Ramsey explains that one person’s trash is another person’s treasure. Then, a group of guys come in and begin playing music on the trash cans and graffiti appliances. When the band is done playing Chef Ramsey says that for the next competition they will be working with leftovers.

Chef Ramsey has cleaned out all of the ingredients from the kitchen, and laid it out on the counter. The chefs have thirty minutes to pick through the scraps and create a dish. Rochelle is off to a slow start and only has ten minutes remaining and is still picking through the scraps. Meanwhile Scott is whipping up some duck and pork tenderloin. Joy is struggling, because her chicken is still raw and it is nearly time to present.

Time is up and Chef Ramsey reveals he has brought in a special guest judge, Laurie Buckle, the food editor of Better Homes and Garden. The winner of today’s competition will be featured in Laurie’s magazine Better Homes and Garden. Scott present his duck first and receives rave reviews from Chef Ramsey and the guest judge. Joy presents her chicken next, and Laurie is unimpressed, she says that the skin should be crispier. Jason presents his “seafood lover’s delight” next, which is packed full of shrimp, mussel, and clam. Laurie and Gordon say that his dish “tastes like leftovers.” The judges are not too impressed with Rochelle’s dish either. Melanie is last to present, she shares a macadamia crusted fillet. After a lot of tasting Chef Ramsey and his guest judge announce that Scott has one the competition. Chef Ramsey reveals that he not only one a page in the magazine, he also won a free trip in a fighter jet. He has to choose one of the other chefs to accompany him, so he chooses Jason.

Chef Ramsey reveals that since Melanie, Joy, and Rochelle didn’t win the competition, they will have to spend the day cleaning and seeding squash. Meanwhile, Scott has his photo taken for his spread in Better Homes and Garden magazine. Then, he and Jason head to the hangar and meat up with the pilot that will be taking them out in a fighter jet. They don’t waste anytime boarding the jet and taking off.

Meanwhile back at the kitchen Joy, Melanie, and Rochelle begin chopping and gutting the squash. Within minutes, Rochelle has an accident and cuts her thumb very badly. Rochelle leaves with the medic and Joy and Melanie begin gagging when they see the tip of Rochelle’s finger laying on the counter. The medic says she needs to go to the hospital to have it cauterized. Jason and Scott return form the trip and Joy and Melanie fill them in on Rochelle’s accident.

The show must go on though, and Chef Ramsey tells the chefs to begin prepping for dinner service. They will have a VIP customer tonight, Stan Lee, the creator of Superman, Hulk, Spiderman, etc will be eating at Hell’s Kitchen. Rochelle arrives at the last minute and will be able to help the other four chefs with dinner.

Melanie and Scott are off to a rough start when they botch the capelinni and crab, and Melanie cooks ways more pasta than crab. Jason thinks that Melanie is starting to lose her mind and a screw came loose, as she burns a second round of capelinni and tries to serve it without adding any cilantro. Stan Lee watches in awe as Chef Ramsey screams at Melanie, he thinks Melanie will never make it as a chef.

Now it’s time for the entrees, Joy, Jason and Rochelle are off to a bumpy start when they don’t communicate and Joy serves the halibut before the wellingtons are ready. To make matters worse, she forgot to add the mussels to the dish and has to fire up the fish station again. Rochelle is determined to bounce back, but it doesn’t look like it is in the cards. Joy ends up in a screaming match with Chef Ramsey and storms out of the kitchen in the middle of the dinner service.

Chef Ramsey follows Joy and tries to talk to her and she continues to argue with him. He tells her to “get out” and she runs upstairs and he storms back in to the kitchen. He instructs Melanie to take over on the fish station. Melanie, Rochelle, Jason, and Scott pull themselves together without Joy and redeem themselves and serve the rest of the dishes without any issues.

Joy has her bags packed, but before she leaves she decides to try to talk to Chef Ramsey and ask him for another shot in Hell’s Kitchen. Joy realizes that is too late, and changes her mind, she knows that she has blown a huge opportunity and has let Chef Ramsey and the remaining chefs down. After dinner service Chef Ramsey reveals to Melanie, Jason, Rochelle and Scott that they are safe for tonight since Joy walked out, however next week he will be sending two chefs home.