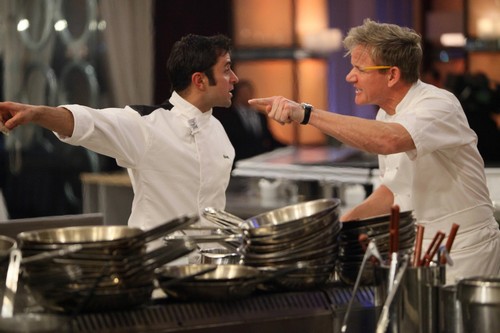 HELL’S KITCHEN returns to FOX tonight for another episode of season 12 called, “6 Chefs Compete.” On this evening’s episode the remaining six chefs head to the University of Southern California to prepare a tailgate for football fans. The top-voted chefs win a lunch and wine tasting in Malibu, while the others are assigned to trash duty. Also: a black-jacket dinner service.

On last week’s episode after spending time with three former HELL’S KITCHEN contestants, this season’s remaining seven contestants prepared for a dinner service with special guests from Oxfam America, including Academy Award nominee and Oxfam America ambassador, Minnie Driver (“Good Will Hunting”). Later, during the dinner service, two contestants struggled with their stations, leading to an early elimination in the middle of the dinner service, Gabriel was the contestant who couldn’t take the heat and was eliminated mid dinner service. Did you watch the last episode?  If you missed it we have a full and detailed recap, right here for you.

On tonight’s episode after Chef Ramsay hands out the final black jackets, the remaining six chefs head to the University of Southern California to prepare tailgate fare for hungry football fans. The chefs who earn the most fan votes will be treated to an exquisite lunch in Malibu, complete with wine tasting, while the other chefs will return to HELL’S KITCHEN to separate trash on recycling day. Later, tempers flare during the first black jacket dinner service, and two of the weakest links will be put up for elimination.

RECAP: Tonight’s episode of Hell’s Kitchen picks up where we left off last week. The final six chefs are all celebrating receiving their black jackets. They head upstairs and decide to make themselves a snack, Chef Ramsey calls them down to the kitchen and reveals they have a few hours of sleep and then will be taking a trip. They head upstairs and try to get some sleep, and then get back up at daybreak and board a Hell’s Kitchen van. They are shocked when the van drops them off at a college football game, at the LA Memorial Coliseum.

Chef Ramsey reveals they will each be completing in the Tail Gate Challenge. Each Chef has to prepare fifty sandwiches and the college students will all taste their dishes and vote for the best one. The chef that receives the most votes will win the first Black Jacket Challenge. The other chefs are whipping up traditional tail gate foods, but Scott decides to make something fancy and sophisticated for the hungry college kids. Meanwhile, Jason’s grill goes up in flames, and he can’t get his meat out of the fire. He gets his meat out and reveals that he planned for his flames to get that large.

It’s time for the chefs to start serving their sandwiches. Each tailgater fills out a ballot and votes for which chef’s food they liked the most. Chef Ramsey tallies the votes and announces there is a tie. Scott and Jason tied for first place. Chef Ramsey reveals he is sending Jason and Scott to a lodge in Malibu where a five star chef will prepare them personal meals. Since the ladies lost the challenge, they will spend the day sorting all of the garbage from the tailgating party and put it in trash or recycling.

After they spend their day cleaning up trash, the final six chefs all head to bed. The next morning all of the chefs head to the kitchen to start preparing their dishes for an early dinner service, except for Jason, who oversleeps. He is hung over form all of the drinks he had at the lodge with Scott. He arrives at the kitchen late, and keeps dropping things on the floor.

Chef Ramsey arrives and tells them it is time to open Hell’s Kitchen, all final six chefs will be working together in one kitchen. The waiters start bringing in orders, and the chefs start whipping up appetizers. Kashia is off to a bumpy start when she prepares one lobster order instead of two. Scott gets screamed at by Chef Ramsey when he overcooks the risotto and has to cook another batch. Kashia is running behind and Melanie tries to take up her lobster tails, and Kashia pushes her out of the way. To add insult to injury Kashia turns around and tells Chef Ramsey that Melanie wouldn’t help her.

It’s time for appetizers and Rochelle is having a meltdown because she can’t find a knife to cut the chicken, she hacks it up with a parking knife and Chef Ramsey says it looks like “a dog’s dinner.” Meanwhile Kashia gets screamed at again because she tries to serve raw salmon. She starts screaming at the other chefs that she needs more time. Chef Ramsey kicks her out of the fish station and puts Scott in charge of the fish. Scott and Kashia screw up the fish again and cook the wrong order. Scott starts screaming back at Chef Ramsey and all hell breaks loose. Chef Ramsey tells Scott that is he “hollers at him again he will drag him out.”

Finally after a dramatic dinner service, the chefs are done with their dishes. Chef Ramsey is disgusted with their performance and tells them to all go upstairs and come up with the one person they think needs to be sent home. After arguing over who screwed up the most, the chefs head back down to the kitchen.

Chef Ramsey joins the final six chefs in the kitchen, and they reveal they have selected to put Kashia up for elimination. After some consideration Chef Ramsey decides to eliminate Kashia and send her home.