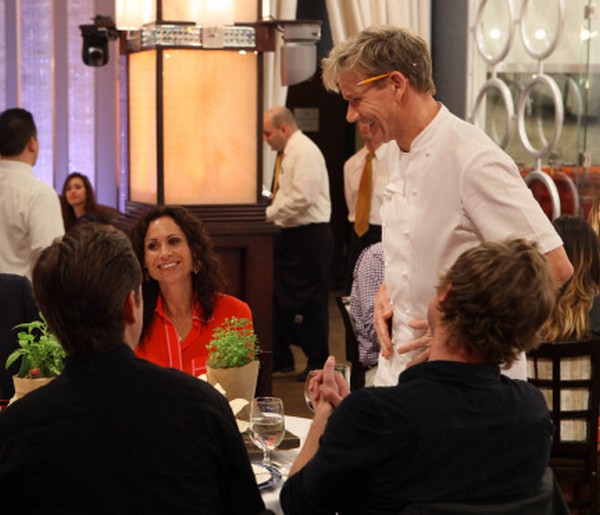 HELL’S KITCHEN returns to FOX tonight for another episode of season 12 called, “7 Chefs Again.” On this evening’s episode the Top 7 chefs serve guests from Oxfam America, including Minnie Driver. During the dinner service, two chefs struggle with their stations.

On last week’s episode with seven contestants remaining, Chef Ramsay put the Red and Blue teams to the test in the grocery store. Each team had to purchase ingredients under a small budget, in hopes of producing three entrees with the highest dollar value. The team that achieved the greatest profit won a shopping spree, while the losing team had to clean the dorms. For the next challenge, Chef Ramsay welcomed three former HELL’S KITCHEN winners to judge each contestant’s entrée. This time, each person was competing individually for the chance at the black jacket and immunity from elimination. Did you watch the last episode? If you missed it we have a full and detailed recap, right here for you.

On tonight’s episode After spending time with three former HELL’S KITCHEN contestants, this season’s remaining seven contestants prepare for a dinner service with special guests from Oxfam America, including Academy Award nominee and Oxfam America ambassador, Minnie Driver (“Good Will Hunting”). Later, during the dinner service, two contestants struggle with their stations, leading to an early elimination in the middle of the dinner service. Find out which contestant can’t take the heat and who earns their black jackets

Tonight’s episode of Hell’s Kitchen kicked off where we left off last week; the chefs are presenting their dishes that they prepared on a budget. The winner will receive a black jacket and be featured on the December page of the Hell’s Kitchen calendar. Joy is preparing her seared duck breast, which she has never cooked before. Joy’s dish earns the highest score, 19, and she has won the competition. She is safe from elimination tonight and will is the first chef to receive a black jacket.

The chefs head back upstairs and Kaisha breaks down because she misses her family. Joy and Scott comfort her and give her a pep talk. The chefs are summoned back downstairs. Joy sits down with the Hell’s Kitchen alums and they give her advice on how to handle Gordon Ramsey and get along with the other chefs, meanwhile the other chefs serve them. In the middle of the dinner, Season 9 winner Paul begins choking and heads to the bathroom to spit out some of the food that the chefs prepared.

Joy heads back to the kitchen and helps her team Kaisha and Scott start preparing dinner. In the blue kitchen Melanie gives Rochelle, Jason, and Gabrielle a pep talk. Chef Ramsey arrives and says that they will be serving a charity dinner tonight and Oscar winning actress Minnie Driver. He reveals that tonight is the last service of red versus blue. And the chefs that aren’t eliminated tonight will receive a black jacket.

The kitchen opens and the guests begin arriving. The blue team is off to a bumpy start when Gabriel prepares the wrong dish and has to start over. The red kitchen is off to a smooth start, and their first set of appetizers is already out on the floor.

All hell breaks loose when Chef Ramsey realizes that his high-profile table where Minnie Driver is sitting still hasn’t received their appetizers and they have been waiting forty-five minutes. Gabriel is holding up the service with his scallops. After Scott and Chef Ramsey wind up in a screaming match, the red team finally gets their appetizers out.

In the midst of service, Chef Ramsey calls a meeting and tells the chefs to get it together. Two seconds after the meeting, Chef Ramsey flips out on Gabriel because he is cooking halibut and salmon together. To make matters worse the salmon is over cooked and he has to recook it. Scott is having similar problems with the salmon in the red kitchen, and he burnt Minnie Driver’s salmon. Chef Ramsey takes Scott and Gabriel both in to the freezer and screams at them. With a fire lit under them, Scott and Gabriel finally get the final plates of salmon out to Minnie Driver and her guests.

Gabriel screws up the salmon again for the third time and Chef Ramsey kicks him out of the kitchen all together, and eliminates him in the middle of the dinner service. Gabriel sulks out of the restaurant and the host follows him out and takes his jacket. A cab picks Gabriel up and he has officially left Hell’s Kitchen. After Gabriel leaves, Melanie falls apart and cries about how horrible she did at dinner.

When the service is finally over, Chef Ramsey reveals that there is no winning team, and their dinner was “a joke.” He sends them upstairs and tells each team to nominate one person for elimination. After arguing upstairs over who should be put up for elimination, the chefs head back downstairs.

The chefs reveal that they have nominated Scott and Jason for eviction. Chef Ramsey calls Melanie, Kashia, and Rochelle up, and gives them their black jackets. Chef Ramsey also hands out black jackets to Jason and Scott, and will not be making any more evictions tonight.