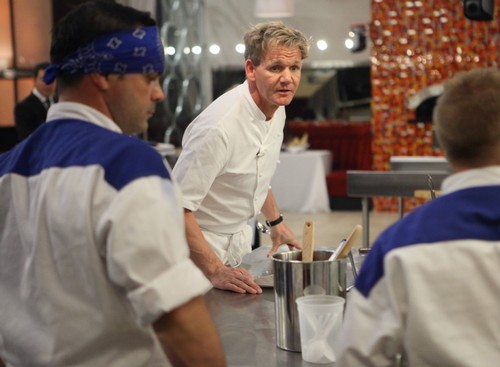 HELL’S KITCHEN returns to FOX tonight for the sixth episode of season 12 called, “15 Chefs Compete.”  In it the 15 remaining chefs work as teams to serve VIP guests. During the meal, one chef serves a dish before it’s finished cooking.

On last week’s episode Chef Ramsay put the contestants to the ultimate memory test when he challenged the red and blue teams to match side dishes with four different types of protein. The team that paired the dishes successfully won a day trip to Laguna Beach, while the losing team spent the day preparing honey taffy from scratch. Later, the contestants got an early wake-up call to prepare a breakfast reception for the first-ever HELL’S KITCHEN wedding. While some contestants rose to challenge, others scrambled to complete the simplest dishes, resulting in an emotional elimination round.  At the end of the episode Chef said Demarco was given too many chances and Chef had had enough and sent him home.  Did you watch last week’s episode?  We did and we recapped it right here for you.

On tonight’s episode In the continuation of a heated elimination, Chef Ramsay asks each team to pick a team leader for the next dinner service. Each team strategizes station assignments, as they anxiously prepare for their first VIP guests in HELL’S KITCHEN. But the meal takes a turn for the worse when one chef prematurely serves an undercooked dish. Find out which team has to present two chefs for elimination and which contestant Chef Ramsay chooses to send home.

Tonight’s show opens up with Chef telling the Red and Blue Team there will be a team leader tonight.  The Teams had to pick leaders.  The Red Team choice Melanie and the Blue Team chose Anton.

Prior to service starting Beth had a meltdown and you just know this is not going to be a good service.

Tonight the Chef has also decided to increase the pressure, the chef will have a chef table.  Sitting at the table at the Red Team is Weed’s actress Elizabeth Perkins.  Sitting at the Blue Table is Charmed and Pretty Little Liar’s  Holly Marie Combs.

Melanie is the team captain and she feels like she is a good motivator.  But she is a little nervous – she struggles to assert her authority.

Anton who is the team leader for the Blue Team is directing his team with confidence.  Anton is happily accepting credit and the appetizers are moving out of the Blue Team Kitchen.  Anton is a little too anxious.

In the Red Kitchen Melanie is anxious to get the Red Team started.  Joy made a perfect Risotto.  Beth is behind cooking the lobster she has not even put it on.  Beth is having a problem communicating.

25 minutes into service the Red Team does not have one appetizer out.

The VIP’s are here and settling in.

Back in the Blue Kitchen – Chris brings his scallops up and they are overcooked.  Anton is not pleased he is making him look bad.

Back in the red kitchen – the VIP table is waiting Joy is ready with the Risotto – Beth brings her lobster it is rubbery, overcooked and Chef throws it.  Beth is a hot mess tonight.

While Melanie struggles get a hold of her kitchen Anton is determined not to let Chris cook the scallops wrong.  Oh no, Anton skips the rule of having Chef Ramsay check the food for the VIP table first and brings it to him.  The Chef’s table send it back as under cooked.  Chef starts to have a meltdown.

Chef takes the plates and threw into the garbage.

Back in the Red Kitchen Team Captain Melanie is trying to coordinate the lobster tail.  Melanie is taking over the lobster section to cook because Beth is not doing.  Chef ask’s Beth if she is gone.  The women’s appetizers are getting out since Melanie stepped up and helped with the lobster station.

Chef asks for a Capeletti and Sandra says she did not know they wanted Capeletti.

In the Blue Kitchen is hoping the third time is the charm.  Finally the Blue Team gets their meal to the VIP table.  The dining room is starting to enjoy their meal.

Chef Ramsay has a simple question for Kashia – how long till her food is cooked and she cannot answer Chef.  While Kashia takes a moment to get over her slipup the Blue Team continues to keep the pressure up.

Chef asks Scott how long for the next table and he keeps screaming 1 minute he is not answering the Chef properly – Chef loses it.

In the Red Kitchen Kaisha is walking with the Beef Wellington and it is cooked beautiful.  However the halibut that Melanie brings over is not cooked.  The Team is discouraged because their Captain brings over raw food.

The Winner of service is the BLUE TEAM and Chef congratulates Anton.  The Red Team has to put two people up for elimination.

Everyone wants Beth up for nomination, she defends herself.  Sandra wants to put up Melanie and Beth.  Jessica agrees that Melanie’s leadership was not great.  Melanie wants Sandra up.  Joy has no idea who to put up.

The Chef congratulates the men.

Chef asks Rochelle who they are putting up – she says Beth because of her lack of communication.

The second nomination is Sandra, she is lacking communication and passion Rochelle says.

Chef asks them to step forward.

Chef asks Beth where she was tonight.  She tells Chef she cannot change the past and can only change the future.  Then she starts crying.  Chef tells her at service she disappears.  She promises Chef the next service he will hear her voice.

Sandra says she is consistent with her dishes and she comes through.  Chef wants to know why they want her gone – she says because they don’t want her to win.  Joy & Keshia agree that Sandra is not a team player.  Chef asks each of the team members who they want to go home.

Chef tells Sandra to go back in line.

Chef tells Beth to bring her jacket her time in Hell’s Kitchen is done, he just cannot see her leading a brigade.

Beth says she would not change coming to Hell’s Kitchen for 1 million dollars.  She want to go home and cry to her momma.

Chef ends by saying Beth thinks she has not succeed in the culinary industry is because she is a women. Chef says it is not that reason it is because she cannot cook.