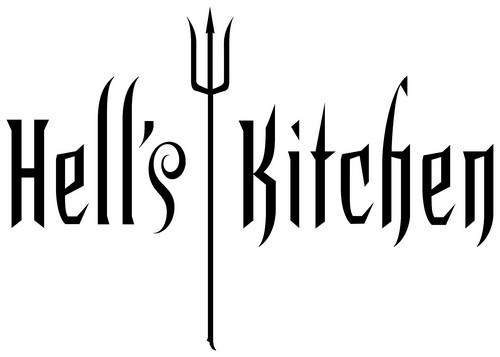 The biggest mouth in the kitchen, Chef Gordon Ramsay, is back for season 12 of Hell’s Kitchen.  The tasty competition starts tonight on FOX and I am excited and hungry to see what gets cooked up.  With chef Gordon Ramsay at the helm there is always more insanity and drama than one sees on most reality TV.

This season Chef Ramsay offers the newest batch of contestants a never-before-seen welcome: the first-ever flash mob in HELL’S KITCHEN history. Then, after splitting the chefs into two teams – men (blue) vs. women (red) – Ramsay asks them to present their signature dishes in another battle of the sexes, but this time they will be cooking in front of a live audience!
Throughout the season, the contestants must prove their ability to work in teams, before Chef Ramsay determines which chefs are worthy of a black jacket. The rewards for the winners include a luxurious spa day, a surprise trip to Las Vegas and an extravagant shopping spree, while the punishments include churning ice cream, cleaning the dorms and separating trash and recyclables. As the competition progresses, the number of contestants will be narrowed down until only two chefs are left to compete for the ultimate prize: a Head Chef position at a Gordon Ramsay restaurant with a salary of a quarter of a million dollars, and the opportunity to fulfill his/her dreams of working in the culinary industry as the winner of HELL’S KITCHEN.

Season 12 begins with Gordon Ramsay dividing the 20 new chefs into two male-female teams. In the first challenge, the teams must prepare their signature dish. The winners are treated to an exclusive dinner with Ramsay, while the losers are left to scrub down the kitchen.

We will be live blogging tonight’s episode with all the excitement, so don’t forget to come back to this spot at 8:00 PM EST to spend the evening with us.  Make sure to refresh often to get the most current results!   One thing that Chef Ramsay has brought to gourmet cooking is 4-letter words – Enjoy!

We start out with an overview of the last 11 profanity-laced seasons of Hell’s Kitchen. We hear about the past 11 winners. The season promises dramatic new challenges and torments from tricycles to live animals to physical altercations. The chefs are brought in via bus and get to know each other. Demarco calls himself “culinary Jesus.” Mike talks about his military background. Philippe welcomes them into HK. There are diners sitting down to dinner and Gordon is running the kitchen. The chefs want to know who the people in the kitchen are. Gordon tells them that he wants them to see how HK should run every night. Waiters hop up onto the tables as Gordon announces LA is the entertainment capital of the world. They erupt into a showstopping dance number to the show’s theme song. The customers are up and dancing too – all are obviously pros.

Gordon tells them the entertainment is done and now they have to entertain him by cooking their signature dish. They run off. He tells them to create something stunning. They have 45 minutes. The teams are men vs women. Gauruv insults his fellow men. The ladies have 10 minute left to go and he tells Simone to move her ass. Gordon yells at the men too. Richard is an older chef and quite confident he’ll dominate the younger chefs. Gordon counts down to the stop. He opens the curtains to show a live crowd. This stuns the chefs. He says the salary for the winner will be $250k.

Anton from New Jersey brings up surf and turf – pork and crab – that Gordon likes. Simone brings up a porkchop that he says is tasty but looks clumsy. The guys win that one. Jason is back from season 9 and left on the first episode on a medical issue. He serves up wild salmon and veggie medley. Gordon likes it. Nicole hands over halibut with butter sauce. He tells her the dish is boring and the guys win again.

Chris is a dinner theater chef and Gordon tells him his hen is good. Joy make a chilled corn soup and Gordon hates it. Another score for the men. The women are dying! Keisha makes a NY strip and Gordon loves it. Mike did packaged tortellini! OMG! The crowd groans. He also used canned tomatoes. Gordon dumps it in the trash and asks if he’s joking. The women finally take one.

Melanie made scallops that Gordon likes and Richard made sea bass that Gordon also liked but he gives it to the women. Bev made fish tacos and he raves. Gabriel made stuffed chicken breast and Gordon slams it and give the win to the women. They are tied up. Gaurav made tuna steak and Gordon hates it. Sandra hands over her pan seared cod but he hates that too. He tells them neither win.

Another Bev made catfish and he loves it. Demarco made gnocchi that Gordon hates. The ladies pull ahead. Rochelle giggles at her tiny opponent. She hands over her chicken and he doesn’t like it. Ralph says he has a spark in his ass and Gordon tries his lobster and like it. The men get a point. It’s tied up again.

Jessica hands over her venison and he tells her it’s a difficult cook but she nailed it. Scott made rack of lamb and Gordon says he f-ed it completely. The ladies take the challenge by one point! He tells her that her dish was amazing. The ladies get to head to Gordon’s restaurant for a dinner treat. The ladies head up to their apartment and claim beds.

The men are told to clean the dining room. Scott says it’s going to be real exciting (ha!). The ladies get to Gordon’s place for dinner with him. He asks what they think about the food and their chances. He tries to get them to loosen up. Bev says it’s amazing to see the real chef Ramsay and says he’s hot. The guys are folding and moving tables. Foul mouthed Mike is dragging his feet. Several of the guys say he’s lazy for not helping with the tables. He tells them f- this and walks out. He goes upstairs and sits down for a snack. Holy cow!

Next morning, the chef come down and get individual knife sets from Henckel. They are so excited. The guys are talking big and the women hope to continue their winning streak but they start pushing at each other. Gordon comes in to check on them and the opening night crowd begins to pour in. Gordon has added table side caesar salad to the menu. Melanie and Chris are prepping these in the dining room.

The first item up is scallops and Nicole is immediately lost. Joy is frustrated and says she can’t babysit her so she take charge. Guarav works on risotto and is confident. Gordon calls them up and says the risotto is runny. Demarco’s lobster tail is screwed too. Gabriel screwed up the scallops. He tells them all to get an f-in grip and they have to start over.

Gordon calls Joy over about her scallops and says they’re rubbery. Joy tries to get Nicole involved. Guarav tries the risotto again and tells him it’s too much pepper. He tells him it’s not vendaloo. One of the scallops are overcooked and it’s at the same table so it’s a disaster. Nicole says she’s done and slams down her pan. One of the girls tries to talk her down but Joy has had it with her. Gordon tells her that her attitude stinks and she should f- off home. She sasses him and Joy takes up the slack.

After 45 minutes, there are no appetizers served and it may be the worst opening yet. Joy and Sandra are not on the same page and Sandra is getting annoyed. Gordon calls out more and is frustrated at the communication problems. Joy is freaking out and Rochelle tries to calm her too.

Gordon yells at the guys and telling them they are playing with themselves and screams when Guarav dips his finger into the risotto to taste it.

An hour in and only bread and table-side salads have been served. Guarav gets one last chance. Scallops are ready again but Sandra isn’t talking and is frustrating her and Sandra tells her to cry again. They erupt into an argument. Jessica says it’s embarrassing and Gordon calls them all over and asks what’s the problem. He tells them to communicate without attitude.

Gordon freaks on the men for overcooking lobster. Demarco has to start over. Sandra finally starts talking but she didn’t give Joy enough of a heads up. Nicole didn’t drop the lobster and Gordon calls Joy and Nicole over. Joy says she can cook it in 45 seconds and he times her. He counts it down on his watch. Joy delivers it and Sandra mocks her. Gordon says it’s raw in the middle. He kicks Joy, Nicole and Sandra out of the kitchen. They take their argument upstairs. Nicole is finally speaking up and screams at Sandra.

Demarco and Gabriel are ready to try again and deliver scallops and lobster. Gordon calls them over to touch the scallops and calls them rubber bullets. He kicks all the men out. He goes to the women but they’re overcooking the seafood too. He says this is the worst HK opener ever. He kicks all the women out too and tells Philippe to shut it down. No one got an appetizer much less an entree.

Gordon tells them to go upstairs and each team to pick two individuals for elimination. He tells them all to f-off. Upstairs, Joy brings up the communication with Sandra who thinks she’s throwing her under the bus. The guys go after Guarav for finger dipping. He says everyone has done it. Gabriel is a second choice but he pushes for Demarco.

Joy tells Nicole that her not talking was a major problem at the fish station. Nicole insists she was there and Joy reminds her she even said she was done. Nicole won’t hear it. The teams come back down to announces their choices. The guys present Guarav for the mistakes and Demarco for lack of energy and passion. The ladies put up Sandra for the fish and app fight and also put up Nicole for her poor attitude. Sandra eyerolls. Gordon tells the four nominees to step forward.

He asks Nicole where her drive and passion are and she offer some lackluster commentary. Sandra tells him she babied the fish station and was communicating. Joy speaks up and Sandra tells her to shut up. Guarav says he has talent and passion and Gordon mimes him licking his fingers. Demarco says he was paired with someone where there was a communication problem. Gordon kicks out Guarav and takes his jacket. He says he can’t do anything else with him. Gaurav mutters “sorry chef” and leaves shamefaced.

Gordon tells the teams to get some sleep and then get serious. Gordon says there are many things about India that he loves but Guarav isn’t one of them…