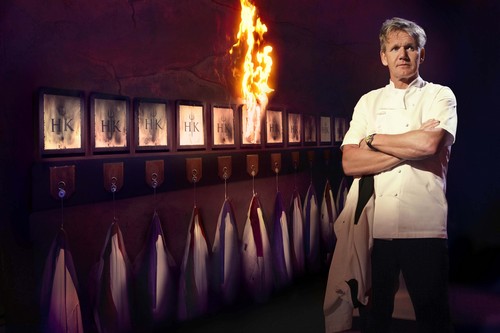 Tonight on FOX our favorite Chef Gordon Ramsey returns with a new episode of HELL’S KITCHEN called, “17 Chef’s Compete.”  On tonight’s show contestants try to raise awareness of childhood obesity.  Did you watch last week’s episode?  We did and we recapped it here for you!

On last week’s show the competition continued with 19 chefs left in the running for the head chefs job.  The new season is just starting and already people are dropping like flies.  We expected a better dinner service, but it just did not happen.  On last week’s show one chef was down and another was out and that is just before breakfast.  Another chef puts too much wine in her food and Chef Ramsay asked her if she has a drinking problem.  Before Hell’s Kitchen even got started   Gina interrupted the Chef and told him that she would not be staying.  At the end of the show Christian was sent home, but there was a surprise the chef told Jeremy to stay behind at the end.  We don’t know what this is about because the show is being continued tonight.

On tonight’s show It’s off to the races when Chef Ramsay leads the first ever HK 3K run with the help of Olympic athletes Maurice Greene, Natalie Coughlin and Danell Leyva. Meanwhile, the red team and blue team must beat the clock and prepare a healthy lunch for the hungry runners. The winning team sets off in a private jet to California’s wine country, while the losing team scrubs down the race course and prepares for dinner service. Later, tempers flare during dinner service when communication fails on both teams, and Chef Ramsay must step in when a fight breaks out between two teammates. Find out who winds up on the chopping block after another dramatic elimination in the all-new “17 Chefs Compete.”

Tonight’s episode is going to be another drama packed one, which you won’t want to miss. So be sure to tune in for our live coverage of FOX’s Hell Kitchen Season 11 episode 4— tonight at 8PM EST! While you wait for our recap, hit the comments and let us know how excited you are about the new episode of Hell’s Kitchen tonight.

Chef Ramsey tells Jeremy that he’s getting worried about him because he’s lost his fight and needs to find his voice. Jeremy says he’s been quiet because he’s been trying to see how everyone will react but he will start pushing a lot harder now.

Chef Ramsey says he’s run a lot of marathons and they have now organized a marathon for childhood obesity. Olympians Maurice Green, Natalie Mcloughlin, Daniel Leyland will be participating in the Hk3K run. Today’s challenge will be to feed the Olympian’s  lunch and the runners. Chef Ramsey wants a volunteer from each team to run while the menu’s are prepared. Mary is picked for the red team. She’s out of shape but hopes t redeem herself. Dan is picked for the blue team and he is sure he can run this backwards. The menu includes steak, salmon and fries.

The Blue team is hurting to complete their meal but they haven’t received a check in from a tired Mary. She’s the last runner but is encouraged to keep running. Dan comes back first and he is brought up to speed.

The finishers begin filing into the kitchen for their lunch. Jon is excited because they’re off to a great head start. However, Zach has to start again because Zach made a mistake on the salmon and cooked it twice. The blue team starts serving some appetizers. Mary finally comes back but is out of it. Nedra helps Susan with smoothies. The men have now moved on to entrees and Danielle finally delivers on the fries for the red team. The men are working on the burgers and salmon. However, Chef Ramsey tells Zach to start again because the salmon is raw. Ray says that Chef Ramsey is not stupid and that he knows what’s going on with Zach. Chef Ramsey thinks Zach simply reheated the salmon. Jeremy starts over on the salmon while the women are closing in. Red team wins! Chef Ramsey tells them to go help out the Blue Team. Dan blames Zach.

Chef Ramsey that the Red Team worked like a team and will be going to wine country in a private jet.  Chef Ramsey wants to know where the spirit on the Blue team has gone. He urges them all to work together. Chef Ramsey wants them to clean up after the runners. The Red team rubs it in while they prepare to leave and the guys clean up the race which includes scrubbing the concrete on the ground. The ladies are excited to be on the private jet. Michael leads the charge to help the Blue Team while Danielle struggles to find her voice. However, Dan has no problem speaking his mind on the Blue Team. Dan doesn’t want Michael making him look like an ass.

Chef Ramsey wants Cindy and Jeremy in the dining room while Hell’s Kitchen is opened up for the third dinner service.  Olympian Kristy Yamaguchi is one of the guests. Barett is nervous about Ray sincehe’s51 years old and his memory might not be all there however Ray’s roseto has gotten the men off to a good start. Jeremy struggles with the table side salad but Susan has no problem with her appetizers. Chef Ramsey starts to come down hard on Ray and tells him to pick up the pace.

Dan is frustrated that Ray’s Roseto is taking so long. However, Chef Ramsey says the Roseto tastes delicious and he’s set the bar. However, Jessica seems to be overwhelmed by her roseto. The blue team has moved on to entrees, but the lamb is not done yet. Chef Ramsey harshly critiques Dan’s lamb and says it needs another minute in the oven. Michael says he has do his job all over again. Chef Ramsey also says that the red team’s chicken is pink and undercooked as Jacqueline begins to stress out. However, her second attempt at the chicken stratifies the chef and diners while half of the guests are still waiting to be served by the blue side.  Michael says that Dan is failing the team by taking so long with the lamb. Michael umps Dan as he walks away from the oven. Chef Ramsey wants to know what’s going on between the two men.

Michael says that Dan has to “fucking talk to him” or go home. Dan thinks Michael is being a baby and sarcasm is not appreciated. Michael doesn’t appreciate that Dan doesn’t know how to cook food. Finally, Dan’s lamb leaves the kitchen.  On the red team, Chef Ramsey thinks that they have dropped the ball since their trip as their meat is overcooked. Amanda wants Danielle to get her act together. After two hours, both teams have managed to feed both their tables. However, Chef Ramsey is not celebrating since there are a lot of issues but the Blue Team wins tonight. Chef Ramsey says that their performance was dreadful: undercooked and overcooked and their worst showing. He wants two names and a lot of the women blame the chef: Danielle. Danielle thinks it’s unfair to throw her under the bus! The women also criticize Jessica’s lack of confidence.

The women nominate Danielle because she can’t show leadership and Jessica because they feel she may be in over her head. Chef Ramsey also wants to hear from Jacqueline since she could’ve killed someone with her pink chicken. Chef Ramsey wants Nedra to explain why Jessica is not a good teammate but she is silent. Chef Ramsey tells Jessica to get back in line. Chef Ramsey wants to know why there was no middle ground in Danielle’s cooking but she is passionate in why she should stay. Chef Ramsey sends Jacqueline back in line because Danielle never really improved in his mind. Danielle is thankful she made it this far but wishes she would have made it further. Chef Ramsey says he is going to turn up the heat because he needs to separate the chefs from the cooks.

Michael thinks Dan is an amateur and needs to get him off the team.