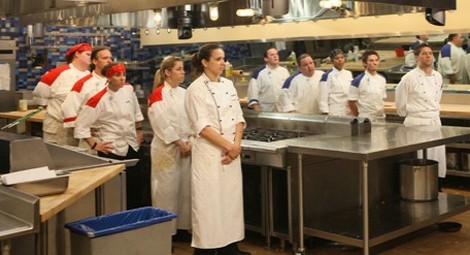 Can you believe that Hell’s Kitchen Season 10 is already upon us.  Only one more episode tonight and we will see who will become the head chef at Gordon Ramsay Steak in the Paris Hotel, Las Vegas, NV,  Justin Antiorio or Christina Wilson.

In Part One of the two-part season finale last week, the two remaining chefs had to build their final dinner service menu and Chef Ramsay brought in a team of world renowned chefs to judge their creations.   The winner of the challenge was Christina.  The finalists were eager to head back to Hell’s Kitchen, but Gordon told them that they have one more thing to do before they go back to Hell’s Kitchen.  They had to pick their brigade.  If you missed last week’s episode you can read our full and detailed recap here!

On tonight’s show after a long and trying competition, it’s time for the final dinner service and for Chef Ramsay to choose the winner of HELL’S KITCHEN. The two finalists must carefully build their teams and create a stunning final menu as they enter into the most important dinner service of their lives. The question is going to be, if the team captains respective teams will lead them to victory and work their hardest or will they mess up.

Tonight we will find out who will be crowned the Season 10 winner of HELL’S KITCHEN and become the next Head Chef working under Executive Chef Kevin Hee at Gordon Ramsay Steak in Las Vegas.

We will be live blogging tonight’s episode to find out who gets a black jacket, so don’t forget to come back to this spot at 8:00 PM EST to spend the evening with us.  While you wait for the recap, hit the comments and let us know what you think about Hell’s Kitchen 2012, so far?  Are you happy with the two chefs who made it to the finale?

The blue team, had problems with many challenges and dinner services.  But thats because the girls were better from the beginning.

Justin, Christina and Dana – Bye Dana.  Goooooooo Team Blue!  Justin – Christina may have 3 stars but Justin never screwed up as much as Justin. He was perfect.

Justin and his perfect palate – Clemenza needs to get over himself…is he walking off.  Kick him off Justin!  That’s right, get over yourself!  You’re staying and off course you wont walk off.  If your passion isnt here then you should of walked off.

Dana and Christina are still bff’s.  Work together girls!  Dont let the friendship get in the way.  Come on Clemz, dont f*!king puss out

Justin is focused on everything “Culinary drill master”

Ramsay is about to taste their dishes.   1 min left and they always screw up.  Thanks to gd Clemz Justin has every reason to worry about Clemz  “You are literally breaking down” – Jusin to Clemz.  You’d be better to kick him off.

Justin and Christina’s menus have to be signed off and Clemz is fucking up on the crustinnis, Of course!  The bromance between Brian and Justin is still strong.

1st dish, eeehhhhh, 2nd one, new presentation, 3rd one…yay! a good one. You can win!

Risotto for Christina, good job!  Although unoriginal , 2nd, ehhh, 3rd looks pretty. But they both need to step it up.  Redo, all much better

Group meeting- Pep talk, good one from both of them . Ramsay didnt put anyone down. Doors open!

Eeeeeeck! Im nervous  –  Their families are sitting down, how unoriginal.

Here we go with the Robyn drama. Dont screw it up Robyn.  I’d be nervous of Royce too.   F*!k Royce! Such a bad choice Justin – Drill sgt Justin 2nd crab cakes from Royce suck!  Why was he even on? Not helping.   Justin has a reason to freak out Royce, dumbass. Finally Royce –  And stfu it took 3 times!

Yay! Happy customers! But red kitchen –  The scallops where Dana is working…not so much – Dont overcook them. Forget the friendship. Shut up Robyn!  You’ve screwed up before too – 2nd scallop try…  …are better –  Thank god – All appetizers are done!

Clemz, shut up when Justin is trying to tell u a ticket and he brought up RAW!  HE IS sabatoging Justin Ramsay!  Sweaty fat guy, get the last appetizers out.

1st table for red entrees… Thats right tell Dana what you need – Thats right, your on the line, not Dana – Get your point across  Dana stop fighting her.  1 hour into service and I cant tell.  Dana needs to get it right, its their 1st table .

Maybe it will be Justin (which I want)

Blue diners are eating alot faster. But the problems are coming…cold food.  F*!king Royce! Be like Ramsay Jusin and kick him out

Cmon Dana, you got this, Its just fish.  Yay its good!

In the Blue kitchen Justin is finally telling Brian what to do.  But Royce screwed up AGAIN. Surprise!

Both these teams are falling behind at one point. Worst service I may have seen in a few seasons.  Last ticket for red .  Why is the Dana screwing up again? Screwing up raw food.  How can you screw up pork.

Now team blue is dying as Barbie is screwing up meat.  And again for the 2nd time. She doesnt have 2 ribeyes?!?  For the last table for blue? Really?

Christina forced to refire due to Danas undercooked pork.

Justins’ final ticket has to do filets, thanks Barbie! Thank god filets work!

Both chefs had setbacks but both served final tables with positive reviews.  Give everyone a hug!  Justin -Really good job —says Ramsay.

No more 2 door thing Tavon is the winner! – CR

After reviewing comment cards and there performance altogether, Ramsay is having a prob making a decision…like.  Flashbacks to the ladies, almost all good.  The phone rings and Chef Ramsey made a decision, they are on the way to his office.

Ramsey give them both good job on tonight.  Amazing palate for Justin.  They step up to the doors. Both their families look nervous and scared $250,000 and chef job at Gordon Ramsey Steak is….turn the handle

Its going to be…  Christina!!

She looks so overwhelmed  –  Christine crying over it…good for her

Confetti and champagne… Ramsey says she is a “strong leader in the kitchen, he knows he isnt rolling the dice with her in vegas”