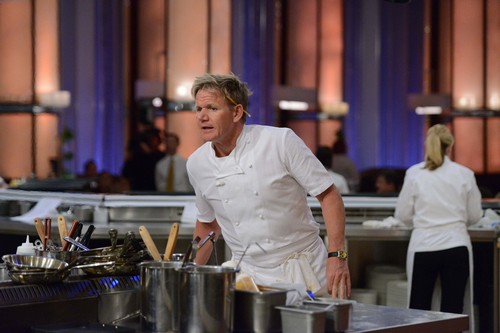 Tonight on FOX our favorite Chef Gordon Ramsey returns with a new episode of HELL’S KITCHEN called, “16 Chefs Compete Pt. 1.” On tonight’s show the contestants palates are put to a test. It’s a wake up call to remember as these chefs are making breakfast for doctors and nurses.  Did you watch last week’s episode? We did and we recapped it here for you!

On last week’s show It was off to the races when Chef Ramsay led the first ever HK 3K run with the help of Olympic athletes Maurice Greene, Natalie Coughlin and Danell Leyva. Meanwhile, the red team and blue team had to beat the clock and prepare a healthy lunch for the hungry runners. The winning team set off in a private jet to California’s wine country, while the losing team scrubbed down the race course and prepared for dinner service. Later, tempers flared during dinner service when communication failed on both teams, and Chef Ramsay had to step in when a fight broke out between two teammates.   Danielle was the chef sent home at the end of the evening.  Chef Ramsay never really thought she  improved. Danielle was thankful she made it this far but wished she would have made it further. Chef Ramsey said he is going to turn up the heat because he needs to separate the chefs from the cooks.

On tonight’s show Chef Ramsay puts the contestants to the ultimate taste test when he challenges the red and blue teams to taste and identify the type of protein used in five dishes. The team that completes the challenge in the least amount of time toasts to victory under the sun at a gorgeous beach house while the losing team spends the day grinding and milling grains to make bread from scratch. Later, the contestants get an early wake-up call to prepare a hearty breakfast for emergency medical workers. While some contestants rise to challenge, others scramble to complete the simplest dishes, and Chef Ramsay grills the losing team during an emotional elimination round.

Tonight’s episode is going to be another drama packed one, which you won’t want to miss. So be sure to tune in for our live coverage of FOX’s Hell Kitchen Season 11 episode 5— tonight at 8PM EST! While you wait for our recap, hit the comments and let us know how excited you are about the new episode of Hell’s Kitchen tonight.

Chef Ramsey has dismissed the Red Team, telling them to “piss off”.  The women discuss what happened in the kitchen. Jessica feels like the Red Team is out to get her but she will continue to prove herself even more.

Anthony says this is absolutely a new beginning after their dinner win and hope to turn it into a streak.

The new challenge is for each team to identify five proteins under the pallets. The Blue team is going first.  It takes the Blue team 10:33 to figure it all out. The Red Team has to beat that time. Nedra and Jessica continually get one palette wrong as the time starts to tick away.

Nedra and Jessica finally get the duck right after having wasted so much time. The guys are rooting for the Red Team to waste as much time as possible. But The Red Team pulls out the win! Chef Ramsey says they are going to experience a day of fun at a Malibu mansion.  Chef Ramsey says the guys got smoked and they are in for a day of grueling labor. They will have to make bread from scratch. The Red Team gloats as the Blue team gets ready to make the bread.   Some of the guys tease Ray over his age, wondering if this is how he made bread in his old age.

Larry Hamilton and Gabrielle Reese surprise The Red Team on the beach! The two go water boarding with some members of the Red Team.

Jeremy passes out on the counter and a medic has to be called. He became overheated and dizzy, his head is starting to pound. Jeremy is scared that this might lead to another stroke. He wants to win, but doesn’t want to die. Team Red returns. Jeremy returns as well and explains he wasn’t eating enough. The guys joke that Jeremy need s a second opinion. Even the women think the diagnosis is funny. The Blue Team has to get up at 4 a.m. to bake the bread after prepping it. They go back to sleep again but Chef Ramsey wants to see both teams immediately.

Chef Ramsey says that chef’s are required to work long hours and says they will be feeding emergency personnel. Each team has 15 minutes to get up to speed on the breakfast menu. Ray is having trouble keeping his eggs in the pan while Cyndi is having trouble getting her eggs out of the pan. She has to start over. The men are almost ready with their first order. Anthony says that Jeremy is becoming dead weight.  Chef Ramsey is also frustrated with Jeremy who seems to be drawing a blank. Chef Ramsey wants to know which disgusting pig was going to serve the sampled food. It was Jeremy. Chef Ramsey says Jeremy could’ve killed someone.

Jeremy leaves the kitchen and the Blue Team comes together to finish the breakfast meal. In The Red Team, Nedra is sleepwalking through the cooking. Nedra hates the morning time. Chef Ramsey tells Nedra to stop and demands to know why she is using soggy materials. Amanda has to start doing everything for Nedra. In the Blue Kitchen, Ray is scrambling to keep up the momentum with his eggs. Chef Ramsey is upset with the eggs and has to start all over again. On the Red Team, the women are almost done. Nedra steps in to get the Red Team back on track while they get behind because of pancakes as Ray gets compliments on his new eggs.  The Blue Team wins!

Chef Ramsey tells the Red Team that he has never seen such a disorganized pancake station in his life. He says it was a disaster and to nominate two individuals for elimination. Many of the women blame Jacqueline for failing on the pancakes and Nedra. Nedra says she is not the weakest one and wants to put Mary up.  Nedra loses it! Jacqueline and  Mary are nominated for elimination. Chef Ramsey is surprised by the decision and Amanda says she disagrees and that she nominated Nedra. Amanda and Ja’nel disagree. Ja’nel would rather go to Nedra for help instead of Mary. Chef Ramsey sends mary and Jacqueline back in line.