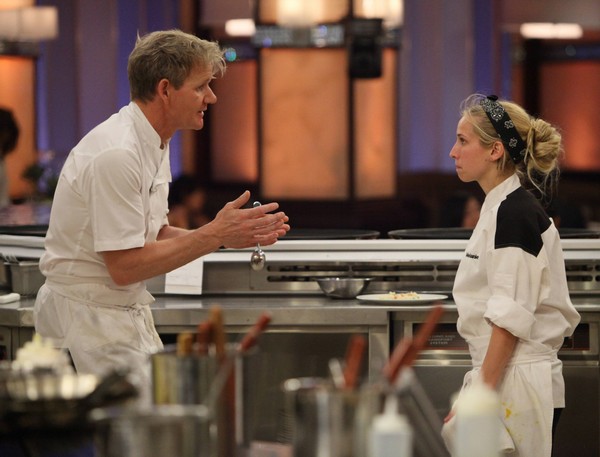 HELL’S KITCHEN returns to FOX tonight for another episode of season 12 called, “4 Chefs Compete.” On this evening’s episode the final four finalists are treated to a surprise when their loved ones visit HELL’S KITCHEN, but family time comes to an end when Chef Ramsay announces the classic “Taste It Now Make It Challenge.”

On tonight’s episode the final four finalists are treated to a surprise when their loved ones visit HELL’S KITCHEN, but family time comes to an end when Chef Ramsay announces the classic “Taste It Now Make It Challenge.” Relying only on their palates and one sample plate of Chef Ramsay’s complex seafood entrée, the contestants must recreate the dish and correctly identify its protein, garnish and purée. The winner will receive a VIP restaurant tour around Los Angeles, while the other chefs will do all heavy lifting during move-out day. After dinner service, Chef Ramsay makes one of the most difficult decisions yet, when he sends two of the four chefs home.

Tonight’s episode of Hell’s Kitchen starts off where we left off last week, Jason, Rochelle, Scott, and Melanie head upstairs after Joy quit the competition. The next morning they head downstairs to the kitchen where Chef Ramsey is waiting for them. There are secret service agents and a metal detector set up in the kitchen. A limo arrives with a police escort and the chefs head outside to greet them, thinking that someone important is arriving. The chefs are shocked to see their family members and spouses climb out of the limos.

They sit down with their families and eat a meal that was prepared for them. Afterwards Chef Ramsey ushers their families out of the kitchens and surprises the chefs with a competition. They have to correctly identify the main ingredients in the dishes they just ate, and cook the exact same thing. The chefs begin running around the kitchen and attempting to duplicate the fish they just ate. When the time is up, Chef Ramsey tastes the dishes and the chef that appropriately copied the dinner was Jason.

As a reward Chef Andi takes Jason out in Los Angeles for a tour of all of the high-end restaurants and Scott, Rochelle, and Melanie are stuck working at Hell’s Kitchen. It’s moving day, and they have to move all of the mattresses from downstairs and put them in a moving truck. Rochelle conveniently can’t help because she cut her thumb, and Melanie busies herself eating taquitos.

Meanwhile, Jason is having a blast on his restaurant tour. Chef Andi surprises him by taking him to a restaurant to eat dinner with his family. Afterwards he rushes back to Hell’s Kitchen to join Melanie, Rochelle, and Scott for their dinner service. Chef Ramsey reminds them that after tonight’s dinner service, two of them will be going home.

Hell’s Kitchen is officially open and guests begin rolling in. Each chef has to take a turn “running the pass” and prove they have the leadership skills that they need to become a professional chef. Chef Ramsey hands control over to Rochelle, and she has to read the tickets to the other chefs. Jason is immediately flustered because he can’t understand Rochelle and she is talking too fast. Chef Ramsey calls Rochelle aside and tells her to “get a grip and stop giggling” or no one is going to take her serious. Rochelle finally gets it together, and appetizers begin flowing out to the guests. Chef Ramsey test her and puts up the wrong dish, but Rochelle catches it.

Melanie “heads the pass” next, and isn’t as successful as Rochelle. As she calls out the orders, the other chefs just ignore her, and no one responds. Chef Ramsey tells her she needs to take control of the kitchen. After a few moments, Chef Ramsey puts Scott in control. Chef Ramsey is pleased and says “excellent, finally a voice.” Scott’s fellow chefs aren’t as impressed with his leadership though, they think he is being too picky and sending too many plates back to be fixed. Jason takes over the pass last, and is ridiculed because he is cracking too many jokes. Since Jason isn’t taking the cooking seriously, neither are the chefs. Chef Ramsey takes Jason aside and tells him if he doesn’t take himself seriously, the other chefs won’t as well.

After dinner service, the chefs head upstairs to decide who they think they should nominate to go home. They head back downstairs and report to Chef Ramsey. Melanie nominates Scott, Rochelle Nominates Jason, Scott nominates Melanie, and Jason nominates Rochelle. After taking their nominations in to consideration, Chef Ramsey announces who he will be sending home.

Chef Ramsey decides to send home Rochelle and Melanie. The final two chefs in Hell’s Kitchen are Scott and Jason.