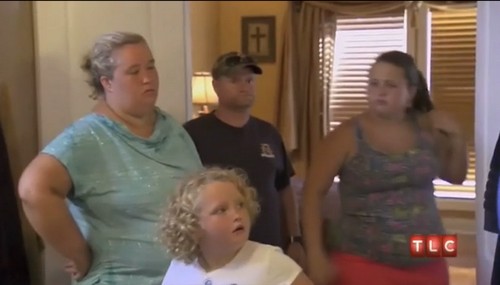 Tonight on TLC their popular and zany reality show HERE COMES HONEY BOO BOO continues with another new episode called, “Funk Shway.”  On tonight’s episode June offers to buy a pool after Alana and Pumpkin dig a hole in the yard, but only if they earn money for it; Jessica’s date with her boyfriend is chaperoned by the whole family.  Did you watch tonight’s first episode?  We did and we recapped it right here for you.

On tonight’s first episode after Alana and Pumpkin dig a hole in the front yard, June offers to buy them a pool if they earn money for it. June and Sugar Bear are strict about dating, so Jessica has to settle for a group date with her boyfriend and the entire family chaperoning.

On tonight’s episode the house is bursting at the seams and it’s time to consider moving. June asks the family for their new house wish-list. The family also enjoys some summer fun at the Blueberry Festival, where Alana competes in a blueberry pie-eating contest.

Tonight’s episode looks like it is going to be another crazy Thompson family episode and you won’t want to miss it, so be sure to tune in for our live coverage of TLC’s “Here Comes Honey Boo Boo – Funk Shway” at 9:30 PM EST! While you wait for our recap check out a sneak peek of tonight’s episode below!

The family needs a new house. They’ve outgrown the one they have and the house is packed with so much stuff. They house will be whole lot tidier if they were able to throw certain things away. No that Mama June lets her family become full-fledged pack rats. Every once in a while she makes her girls donate some of their things to people in need. But, as Alana pointed out, it’s usually the kids donating and never their mother. She’s the one that stockpiles everything

Mama June spoke about it to Sugar Bear about needing more space. Once they agreed they called family meeting to get the girls’ opinion. Everyone is actually pretty excited by the idea. Jessica says she wants more space and Pumpkin wants to own a bidet. She thinks it will be interesting to use. And so they all agreed as family to go house hunting.

Before they do, they wanted to enjoy one of their community’s various fruit festival . The family loves these kinds of things. Especially the activities. There was a gigantic hamster ball the girls could go into and play around. Alana loved it. Even though she was much better at it than Anna. There are also contests at these festivals. Such as a pie eating contests. Alana had joined her age group for one of them. She was super excited but her mother warned her to not get upset if she didn’t win. Alana is very competitive and has been ever since her pageant days. Luckily this time she didn’t get the chance to get upset.

Alana won the pie eating contest. And Mama June thinks Alana’s strategy might have helped her win. The seven year old threw her whole pie onto the table and then began shoveling it in. It was probably not the most lady-like though she still won.

The whole family filled up their plates with what the festival had to offer. Although their eyes could have been just a tad bigger than their stomachs. They eat and eat until one by one everyone began to feel sick.

Afterwards the family finally begins their house search. Their real estate agent who just happened to be a “poodle” shows them a house about 15,000 under budget. And because the budget is 90,000 then the house is a pretty good deal. Or better yet it would have been if it had come move in ready. The house needs repairs and instantly Mama June notices that it smelled. It was a foreclosure house so it’s been shut in for a while.

The second house was five grand over budget. Nevertheless it was worth the price. There was plenty of room. Not that it stopped Mama June from nitpicking. Eventually Jessica got frustrated with her mother. She felt like her mom wasn’t getting how everything they’ve seen so far has been a step up from their house.

The last house is completely unsuitable. It’s over three hundred grand outside of their range. There was no way Mama June was even considering taking the house but she did let her girls enjoy it. They all checked out the bathrooms. Mama June ended up using one and in her own words blew it up. Then the girls just got out of hand. They went into the fully stocked fridge and were snacking.

Jessica was mortified by her sisters’ actions. She also felt really bad for the real estate agent for having to deal with her family. Meanwhile the agent looked like he wanted to escape for the longest time.

Mama June and Sugar Bear are ready to offer up for one of the houses but their daughters started to have doubts. They have a lot of memories in their home and their not sure they want to give up. Funnily enough their parents had the same idea. They love their house too. Anyways they like the school system and the community. Why bother start over somewhere else?

When Mama June told the girls, they were happy. This was home and maybe it’s not perfect but it is home!