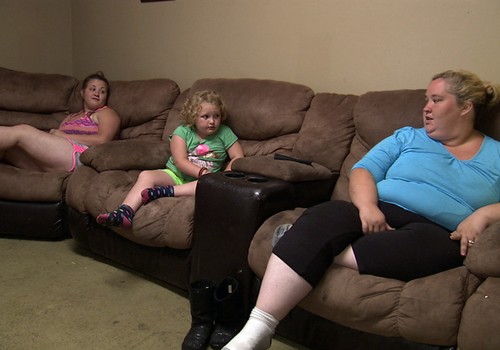 Tonight on TLC their popular and zany reality show HERE COMES HONEY BOO BOO continues with another new episode called, “Get A Job.”  On tonight’s episode June offers to buy a pool after Alana and Pumpkin dig a hole in the yard, but only if they earn money for it; Jessica’s date with her boyfriend is chaperoned by the whole family.  Did you watch tonight’s second episode?  We did and we recapped it right here for you.

On last week’s episode June and Sugar Bear never had a honeymoon after their Commitment Ceremony, so they decided to make it a family affair and went on a Familymoon. Their RV journey included an Animal Safari, encountering the wild animals, a Children’s museum, and a candy shop.

On tonight’s episode after Alana and Pumpkin dig a hole in the front yard, June offers to buy them a pool if they earn money for it. June and Sugar Bear are strict about dating, so Jessica has to settle for a group date with her boyfriend and the entire family chaperoning.

Tonight’s episode looks like it is going to be another crazy Thompson family episode and you won’t want to miss it, so be sure to tune in for our live coverage of TLC’s “Here Comes Honey Boo Boo – Get A Job” at 9:00 PM EST! While you wait for our recap check out a sneak peek of tonight’s episode below!

Mama June really want to motivate her daughters into doing something this summer besides wrecking her yard. The girls had gotten either so hot or so bored that they digged a hole in the front yard and created a mud hole. They were using it as their makeshift swimming pool when their mom saw what they had done. Mama June was furious they destroyed her yard like that. But rather than strictly punish them she went with teaching them a lesson. Just because she’s a proud redneck doesn’t mean she can’t teach them values. She told the girls the family will get another pool as long as the girls get jobs to pay for it.

They weren’t too enthusiastic about that. Although the worst was yet to come. Jessica wants to go on a date but her parents are strict. She’ll only be allowed to go on a date if it were a family date. As in the rest of the family will be joining her and poor Phillip. She had thought seeing as she was double dating with her big sister, Anna, that it would be enough for her parents. Well it wasn’t. June already has one grandchild; she doesn’t want another.

The whole family followed the couples to the track and they weren’t even pretending to give the girls privacy. They called to them and Pumpkin kept breaking up any kissing she saw. Both Anna and Jessica were embarrassed.

By the next day though, the girls bounced back. It wasn’t like they had a choice anyway. They had to go to work. The girls thought it would be better to use various jobs to gain the money they needed. They washed cars and somehow the gunk they were washing off kept going into their mouth. They were baby-sitters. And frankly that one wasn’t hard. The girls even walked several dogs. It seems they were going to do whatever was necessary to get the pool they wanted.

Alana admitted she has a secret boyfriend to the cameras. She didn’t tell anyone his name because she didn’t want her mom to find out.

The older two have begun to get serious with their boyfriends and she was proud about them having a normal teenage experience. Particularly, seeing as she was young when she first started to have kids. So that’s why she was initially scared for them but her girls managed to pick two guys that are serious about them. Anna’s boyfriend’s Michael gave her ring. He knew better than to propose though. He just wanted to give her a ring to show he was serious.

While Jessica’s boyfriend also gave her a ring. He gave her a promise ring to show her that, yes, he really does love her. June was happy to see their rings not that she let that stop her from seeing Pumpkin’s reaction. Pumpkin swore she didn’t want a boyfriend but she was more aggressive than usual. Could she be a little jealous maybe? And will Pumpkin feel left after out if she were to learn she was the only one without a guy?

They managed to raise enough money to get a new pool. The newer pool had a slide and was fun. At least while they had it. June had thought if the girls worked towards the new pool that they would treat better than the last one. She ended up being wrong. Her family destroyed the new pool within 2 weeks. And there was June thinking her girls had matured.