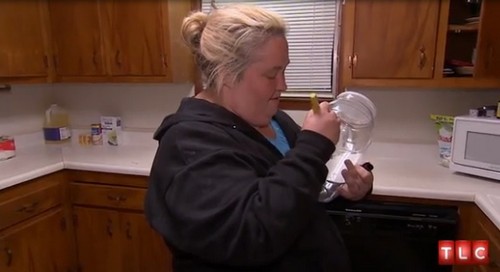 Tonight on TLC their popular and zany reality show HERE COMES HONEY BOO BOO continues with another new episode called, “Can I Say *****.” On tonight’s episode the family set up a swear jar after the girls’ language starts to get a little salty. Meanwhile, Anna tries to make a chicken potpie after declaring she wants to go to cooking school, and she gets a hand from Alana, who likes handling raw chicken. Did you watch tonight’s first episode?  We did and we recapped it right here for you.

On last week’s episode the girls were spending their summer vacation in bed, so Sugar Bear decided the family really needed some time in the outdoors. The girls were not happy, refusing to load up their camping gear and then crying when their electronic devices were taken away.

On tonight’s episode The girls have developed potty mouths, so the family sets up a swear jar. Meanwhile, Anna thinks she wants to go to culinary school, so her family dares her to make a chicken pot pie. Fortunately, Alana enjoys handling raw chicken and is able to assist.

Tonight’s episode looks like it is going to be another crazy Thompson family episode and you won’t want to miss it, so be sure to tune in for our live coverage of TLC’s “Here Comes Honey Boo Boo – Can I Say *****” at 9:00 PM EST!

On tonight’s episode, Sugar Bear has had enough of the girls swearing. Lately they’ve gotten out of hand it. They’ve always sworn before but never like they’re doing it now. So Sugar Bear and Mama June have created a challenge. Every time the girls swear they have to put 25 cents into the swear jar. And Mama June is covering a whole range of swear words. Even “crap” and “shut up” qualifies a quarter.

At the end of the jar challenge, whoever has cussed the less will get a steak dinner while everyone else has to eat a salad. June knows her family hates having to eat anything with vegetables in it and is hoping the salad could put enough fear into the kids. As for the jar, she’s thinking she might be able to go on a vacation afterwards from the proceeds.

However the swear jar isn’t working as much as the parents’ planned. Mainly because the girls don’t have the money to pay for all the time they cursed. Pumpkin for one was caught trying to find the money under the couch and in a sleeping Sugar Bear’s pocket. That’s why Mama June upped the ante. Now whoever swears has to pay a quarter and eat one vegetable. But as Pumpkin pointed out; the biggest offender is their mother. No one swears as much as she does.

In order to teach the girls a lesson it was time for Mama June to follow the rule and surprisingly she couldn’t. June hates vegetable more than anyone else in the house. When Sugar Bear tried to enforce the rules with her; she tried to bribe him with fooling around. Maybe this why the kids aren’t taking the new rules seriously either.

The oldest daughter Anna recently graduated from high school and June wanted to know what she wanted to do with her life. Anna says she wants to find a job and go to culinary school. She also wants to move out but her mother is worried she hasn’t thought this through. Mama June was teen mom and she knows how hard she had to struggle with paying bills and raising Anna. And yet she doesn’t want to crush Anna’s dreams.

Mama June wants to supports her daughter and that’s why she asked Anna to cook a meal for the family. Jessica added to the dinner challenge by asking Anna to cook a pot pie and not in the microwave. Anna struggled for a little bit while she was preparing dinner. She didn’t know she was supposed to clean the chicken before she started cooking and she didn’t knowing how to cut meat. Anna eventually resorted to pulling the chicken apart to cut it and even then Alana had to help her. And although it was completely unhygienic; the meal did not give anyone salmonella.

The whole family enjoyed their meal and except for some minor criticisms about needing more butter they all thought Anna did an overall good job.

It was time to see who had won the swearing jar test and Mama June was shocked to find out that she was the worst offender. She really does swear more than anyone else in the house. The only people that weren’t cursing up a storm it seems were Alana and Sugar Bear. Alana was caught saying “shut up” at least four times and Sugar Bear hadn’t cursed once. Mama June doesn’t like it but a deal is a deal. The whole family went out to dinner and everyone had to eat salads while Sugar Bear got to enjoy his steak.

It was hard for the girls to watch Sugar Bear eat meat while they had salads in front of them. Mama June had actually cursed trying to eat it and when she was told she would have to pay a quarter she continued to attempt to bribe Sugar Bear. Only, just like last time, it didn’t work.

The girls did learn a lesson with the salads. Alana promised that it would be the last time she would ever have to eat a salad. Guess she’s given up swearing!