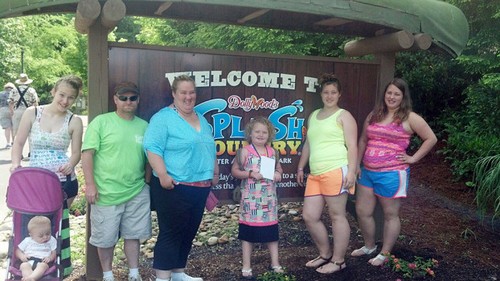 Tonight on TLC their popular and zany reality show HERE COMES HONEY BOO BOO continues with another new episode called, “Stand Peein’ Up.” On tonight’s episode Sugar Bear’s idea for camping is met with resistance from the girls, especially when their electronic devices are taken away.  Did you watch tonight’s first episode?  We did and we recapped it right here for you.

On last week’s  first episode after failing to “swoo” June in the bedroom, Sugar Bear suggested couples’ therapy, which June warily agreed to. While the folks are dealing with relationship stuff, the girls amuse themselves with ice blocking and exploding soda bottles.

On tonight’s episode the girls are spending their summer vacation in bed, so Sugar Bear decides the family really needs some time in the outdoors. The girls are not happy, refusing to load up their camping gear and then crying when their electronic devices are taken away.

Tonight’s episode looks like it is going to be another crazy Thompson family episode and you won’t want to miss it, so be sure to tune in for our live coverage of TLC’s “Here Comes Honey Boo Boo – Stand Peein’ Up” at 9:00 PM EST!

Sugar Bear and June decide that their girls have “slept half way through summer.” Sugar Bear wants to take the family camping. June is skeptical, but she agrees to go if Sugar Bear can “get their asses out of bed.”

Alana and her sisters are not thrilled about the idea. June convinces them that they have to do something nice for Sugar Bear once in a while, and he really wants to go camping. Honey Boo Boo says they “do NOT do camping.” According to June the girls are going to go “bat shit crazy” when they have to leave behind their cell phones and other electric devices, and they do. Alana and her sisters scream and argue the entire trip there.

Honey Boo Boo and her family arrive at the camp site, and begin trying to set up their tent. Halfway through setting up the tent, June decides she needs to take a nap, because it is really exhausting standing there and barking orders to everyone else. She has quite a scare when she finds a snake on her air mattress though, but it turns out to be a toy snake that Sugar Bear planted there. Sugar Bear says the only snakes June needs to worry about are “trouser snakes.”

Alana and her sisters go fishing, Sugar Bear doesn’t have a great time fishing because he has to bait all five girls’ poles, and spend the rest of the time getting their fishing lines out of the trees. It’s safe to say fishing isn’t Honey Boo Boo’s family’s niche.

After their fishing fiasco Alana and her family go out on the lake in paddle boats, which turns into another fiasco. Their boat rides turn into an intense round of bumper cars on water.

After a long day of activities one of Alana’s sisters decide that they want to “pee standin’ up” in the woods, because squatting down to pee is just too much work. So, how is a girl supposed to “pee standin up?” By using Sugar Bear’s gas funnel…gross.

Overall, Honey Boo Boo and her family’s camping trip was less than successful, but at least they did something nice for Sugar Bear. They most likely won’t be camping again anytime soon.