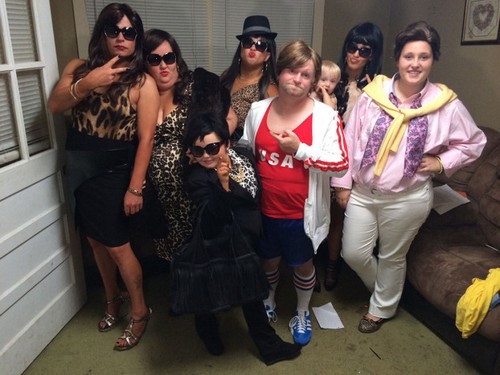 Tonight on TLC their popular and zany reality show HERE COMES HONEY BOO BOO continues with another new episode called, “Halloween Too.”  On tonight’s episode trick-or-treating time at Halloween brings out the girls’ best pranks and novel ideas for costumes. Did you watch tonight’s first episode?  We did and we recapped it right here for you.

On last week’s episode Alana and Anna shared a birthday, and June wanted to do something special. Since Alana’s getting older, June decided to teach her about menstruation. Meanwhile, June’s period was late and she was acting “funny.”

On tonight’s episode Boo! It’s Halloween time in Boo Boo-land, which can mean only one thing PRANK SEASON! The girls bring on the hijinks including creepy crawlers and exploding fart bags. Then the family comes up with “klever” costumes for candy collecting.

Tonight’s episode looks like it is going to be another crazy Thompson family episode and you won’t want to miss it, so be sure to tune in for our live coverage of TLC’s “Halloween Too” at 9:00 PM EST!

The episode starts with the family carving pumpkins. Sugar Bear decides to carve a watermelon instead. The family then gets into a pumpkin throwing contest and starts giving each other pumpkin wedgies. They then start playing pumpkin softball. The next day, as they are sleeping, the snowman starts to ring suddenly. The girls think that their Nana is trying to speak to them through the pumpkin. Poodle thinks that they need to hire a medium to find out whether or not that is Nana. Mama June thinks it is all bull, but everyone else is convinced. Pumpkin then decides to prank everyone by putting a spider in Poodle’s pants, a mouse in the cupboard, a crab in the bathroom, and a snake in Mama June’s bed.

The episode continues with everyone playing musical chairs; they pass the masks around making silly faces. They then try to decide what to be for Halloween. They decide to be the Kardashian family for Halloween. Mama June then has a black light and everyone decides to use the light and go stain hunting. They discovered that there are stains all over the house. They then discover a stain on the wall that says watchin u and Alana freaks out. They suspect, however, that it was Pumpkin who wrote it because she is such a big prankster.

The episode then comes back with Alana throwing fart bombs at everyone in the house. The family then goes to volunteer at the Perry Haunted Farm. It is known to be the scariest haunted house in Georgia (according to them). They are volunteering for charity. Alana wanted to be the zombie baby. Mama June decides not to dress up and sells tickets instead. Sugar Bear is a man with an axe, Pumpkin Is a clown, and Poodle is a scary looking murderer of some kind. The family has a good time that day making money for charity and scaring people.

The family then brings a medium over to deal with Nana and the snowman. The medium asks if Alana was named after someone (yes). She asks about Mama June’s brother, the kid’s real dad, and even which one of the kids wants to be in the medical field (Jessica). The medium also says that nana doesn’t live in the snowman, but she does mess with it to remind everyone that she is around. Mama June gets really emotional and decides that she does believe in mediums after all.

The next day, Mama June decides to play a prank on Pumpkin. She blindfolds everyone and has them eat their favorite food, but she puts mealworms in Pumpkins food (corn). Pumpkin takes a big bite out of it, spits it out, and then freaks out when she takes off her blindfold. For dinner that day, Mama June makes chill for dinner with romaine noodles which she calls poor man’s soup. Alana makes her own scary chili and she decides to see which chili is better. No one likes Alana’s chili which contains things like pig’feet and other gross items.

The family then gets ready for Halloween where they are still dressing up like the Kardashians. They go to the country club to go trick-or-treating because that is where all of the rich people are. When they get there, though, no one recognizes them as the Kardashians except for one older lady. The family decides that being the Kardashians is too tough and too glamorous for them, so they head home to change and count their candy. The episode ends with them going through their candy, and the snowman going off while they are trying to sleep.