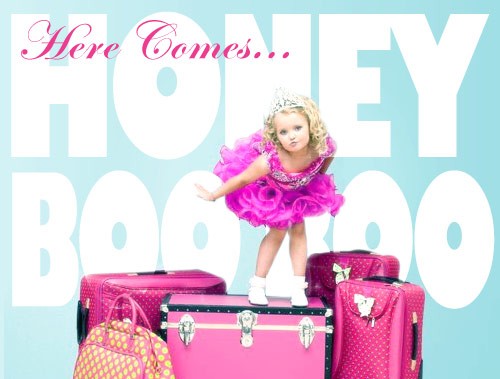 Tonight on TLC their popular and zany reality show HERE COMES HONEY BOO BOO continues with another new episode called, “You’re Be Nineteen.”  On tonight’s episode a shared birthday for sisters Alana and Anna has their mom planning something special, though June also wants to talk to Alana, her youngest daughter, about puberty. Did you watch tonight’s first episode?  We did and we recapped it right here for you.

On last week’s episode  someone’s not flushing in the House of Boo, and Alana made it her mission to reveal the devious doo doer. Outside of the bathroom, Sugar Bear still had babies on the brain. Later, June found an apartment flyer in Anna’s room and confronted her with it.

On tonight’s episode Alana and Anna share a birthday, and June wants to do something special. Since Alana’s getting older, June decides to teach her about menstruation. Meanwhile, June’s period is late and she’s acting “funny.”

Tonight’s episode looks like it is going to be another crazy Thompson family episode and you won’t want to miss it, so be sure to tune in for our live coverage of TLC’s “You’re Be Nineteen” at 9:00 PM EST!

There’s something going on with Mama June’s piñata. Alana was playing around one day and she decided to max-pads as a toy so her mother had to sit her down for a heart to heart chat. Mama June explained that everyone has a piñata inside of them. This piñata grows and grows until one day it pops. That’s were maxi pads come in. They catch al that candy that’s not really candy but actually blood. Oh and sometimes the candy is smells like sour candy.

Alana still didn’t get and thought periods were just the things at the end of the sentence.

Still there is something up with Mama June’s piñata and she’s trying to keep it secret or now. She hasn’t gotten her period in a while and the last she was late was when she was pregnant with Alana. But she’s keeping her suspicions a secret while the family is gearing up to celebrate Anna and Alana’s birthday.

Sugar Bear hasn’t told her that he’s caught on yet and neither have any of the girls. They’ve all seen how weird or in Mama June’s case hormonal she’s been lately. And that could play a part in Anna’s sudden wish to move out. She said it was getting too crowded in the house and refuses to listen to reason.

Anna’s whole family is trying to talk her out of it and she’s kind of ignoring them. Even Anna’s sisters don’t think Anna can stick out alone. Alana says she’ll miss her sister and Pumpkin thinks Anna is being naive.  She thinks that it would be easy to get a job and live by herself and her daughter. But Mama June knows what that’s like. She had Anna when she was 15 and it always a struggle to pay the bills. So in the end they all believe that Anna will come back home once she realizes how hard it is.

For the girls birthday the family planned an outing at the amusement park and Anna was supposed to meet up with the rest of her family with her boyfriend and daughter in tow. However she never arrived. She didn’t go and she didn’t tell anyone in her family that she wasn’t going.

For Alana though they managed to go on with their day. And they rightfully enjoyed themselves. The family had fun and Alana got to enjoy celebrating her birthday all by herself. She even wiped off Anna’s name off of the birthday cake.

When they returned home, they were a bit thrown when they didn’t Anna or her baby. But Mama June decided to put off worrying in order to take a pregnancy test.  She was so happy when the test came up negative that she told Sugar Bear that he’ll live to see another day. Mam June didn’t want another kid in the house and yet she liked the idea of a baby. She’s been getting broody.

And that’s why it’s especially hard to accept Anna’s absence. It’s possible that Anna has moved out without telling anyone. Her parents have no idea when or if she’s coming back home.

Mama June needed some loving after that and called in her girls for a snuggle fest. She wanted to be surrounded by her babies and tell them she loved them. They also told her that they loved her too. The only thing that would have made the night even more special was if Anna had chosen to return.

For a 19 year old she still needs her mother!