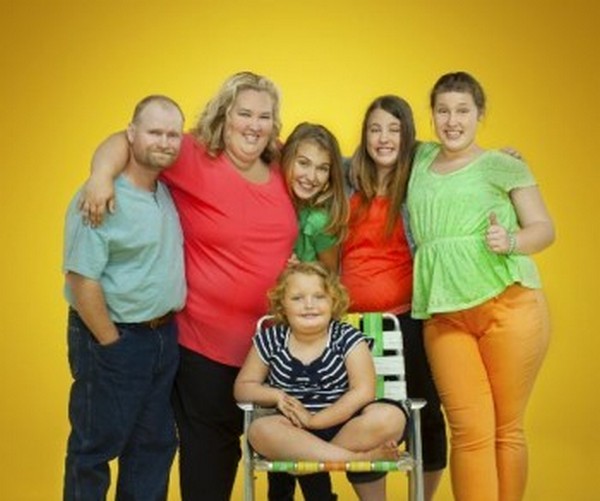 On the last episode June’s “b*tching” and nagging landed Sugar Bear sick in bed from stress. Will June have to permanently alter what comes out of her mouth to keep her man healthy? Or were Sugar Bear’s de-stressing techniques like “yodega” and racing more beneficial?  Did you watch tonight’s first episode?  If you missed it we have a full and detailed recap, right here for you.

On tonight’s episode June’s love of couponing takes over, leaving Sugar Bear looking for ways to exploit her addiction for affection. The sisters try being affectionate too, as a new “be nice” contest has high stakes: the spare room. Little do they know the contest is rigged.

Tonight’s episode looks like it is going to be another crazy Thompson family episode and you won’t want to miss it, so be sure to tune in for our live coverage of TLC’s “Bingo Face” at 9:30 PM EST!

Space is a sacred commodity at the blended Shannon-Thompson house. Mama June is obsessed with couponing and so she’s built a stockpile for herself. But her obsession has surrounded the family like a fortress. Wherever you go – you’ll bump into something. There are only certain areas of the house the girls can have space and that’s the living room and their bedrooms. That’s why when Anna’s room became available it was like the Holy Grail to them.

Pumpkin tried to use squatter’s right to inherit the room and Jessica tried to her standing at the next eldest to get the room. While Alana said the biggest room should go to the one with the biggest personality which is her!

The girls were fighting so bad that June was forced to find a solution. She told the girls that whoever could stay the nicest for the longest would win the room. That means no cussing or fighting. She wanted only their best behavior. That way she and Sugar Bear can finally have some peace and quiet without hearing the girls fight all the time.

Though her girls did get her back for the way she manipulated them!

They joined together to stop the stockpiling. They told their mother she needed to stop filling their home with crap. But it’s not all “crap”. The girls like having extras (soap, toilet paper, napkins) and they also enjoy playing around with the supplies (like the saran wrap) so Mama June doesn’t feel like she has to change.

Her personal armory of supplies amounts to about 12,000. So that’s thousands of dollars Mama June has saved for her family. And for the people using the saran wrap to feel like slugs come to life – you’d think they would be more appreciative.

Another thing that’s been bothering their mom is the squinting. The girls all have problems with their eyes. They all squint when they want to look at something. Something Mama June also does (then again she also legally blind in one eye) so she sent them to the doctor to go have it checked out. Although no one feels like wearing glasses even if they might have to. Apparently glasses won’t go with their personalities and that includes little Alana. She said her face shouldn’t be ruined by wearing it.

If she had to use something then she’ll wear contacts.

As for their competition – sadly the girls were lied to. Mama June promised the room to whoever was the nicest and yet she had plans for that room all along. The room is going to Uncle Poodle. He needs a place to stay and so his family offered to put him up.

And out of revenge for losing out on the room – the girls then found another fun way to play with the saran wrap. They covered their Uncle’s car in it!