Hilary Duff Smiling, Sexy and Happy as She Leaves Ex on Daddy Duty and Heads to Recording Studio (PHOTOS) 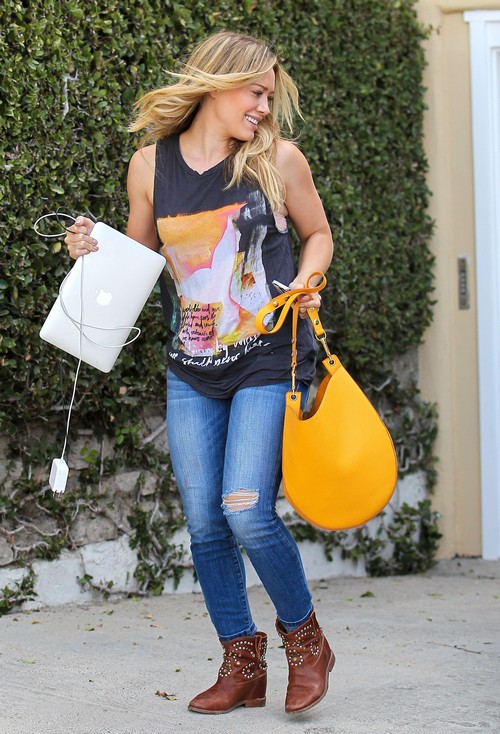 Hilary Duff has definitely been looking good lately. She’s even smiling at the paparazzi when they ambush her with their cameras. That is so rare;  I don’t think its ever been heard of (outside of a red carpet event) before. So what gives? Don’t misjudge! We do want her to be happy and yet all the smiling looks suspicious. You know on account of no one generally looks that happy in the early days of a separation. We would  perfectly understand if she were celebrating a divorce except one minor problem – no one has filed a thing. And that leaves us right back to where we started with the same question. Either Hilary got back with her husband, Mike Comrie, or something as equally important as her marriage has come along.

As we said before and we’ll say it again “Hilary Duff was always going to go back to work”! That is is no way a judgement on what type of mother she is. It just means she loves both her son and her craft. Anyways it was about time she headed back into the workforce. Audiences are fickle and they would have forgotten her in a heartbeat. The same way she accused them of forgetting Faye Dunaway back when they both were feuding. In her line of work you have to be seen to be believed. Or, seeing as its a trend now, not to be presumed dead!

I’m glad for her. Although I heard she wanted to branch out again into music. That maybe not be best choice (ever) but at least she has choices. Mike is a good guy or better yet that’s what we can tell from what we’ve seen so far.  He’s simply was also holding her back from pursuing her dreams. Since their separation we’ve heard of her starting a new album and possibly heading back to television.

She might not have been able to do if she had stayed with Mike!