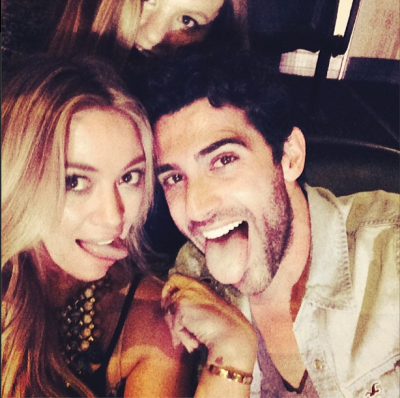 Hilary Duff was seen at a Miley Cyrus concert with a handsome man who is now revealed to be her hair stylist… her gay hairstylist. I suppose the reason everyone got in uproar is because Duff spent Valentine’s Day with her estranged husband Mike Cormie barely a month after announcing their separation back in January. However, since her concert buddy has now revealed himself to be her hair stylist Marcus Francis and is unequivocally not interested in Duff because she lacks the correct parts, we can all sleep easy now.

Duff loses major cool points for attending a Miley connect first and foremost.  Whatever talent Miley has is overshadowed by her nonsensical stage show, and what kind of person would willingly assault their eyes with such madness? I’ve seen the photos and her stage show looks like a hillbilly circus imploded onto itself and is currently spilling toxic whore waste into concert venues all over the country.

I won’t pretend that I hate the song Wrecking Ball, or that I don’t feel inspired when I hear “The Climb” but if someone GAVE me Miley Cyrus tickets I’d burn them and have a priest come bless my house. That’s how dirty watching her makes me feel… and I’m not the only one as people who have tickets (inexplicably) are trying to get rid of them at an alarming rate.

But back to Duff… something about her stepping out like this makes me think she wants attention; from whom is the question. I could be wrong, it could be completely normal for Hilary to attend a concert with a gay staff member and act as if she’s on a date. Nothing says platonic like handholding and cuddling. What do you guys think? is Hilary trying to make her estranged husband jealous or should a girl be free to hold hands and cuddle with her gay hair stylist without those pesky dating rumors? Let us know in the comments section.