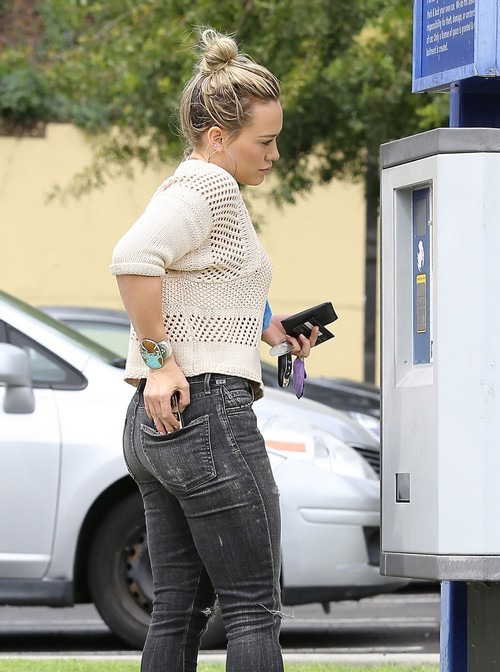 Hilary Duff joining Scientology? There’s a sentence that I never thought I’d say. But according to reports, Hilary might be getting wooed by the infamous religion in the wake of her divorce from Mike Comrie.

Granted, she and Mike seem like they’re working on patching things up, but perhaps Hilary is already looking ahead? Reports allege that Hilary has been hanging out with the ‘Young Hollywood Scientology crowd’, and that she was spotted sporting a fake tattoo with Scientology symbols.

Ok, I think these reports are getting ahead of themselves a little. Everybody’s been jumping on the Hilary Duff/Scientology bandwagon after Hilary was spotted with her BFF Alanna Masterson at the Coachella music festival. Considering that Alanna has been a life long member of Scientology, along with most of her family [including her brothers Danny Masterson and Chris Masterson], people are quick to assume that Alanna is somehow influencing Hilary to join the religion.

However, Hilary and Alanna have been best friends for the past ten years, so I doubt that Hilary ‘just’ began hanging out with the Scientology crowd. I’m sure she’s open-minded enough to have friends that are Scientologists without trying to alienate herself from anyone. Since she and Alanna are such good friends, no doubt Hilary is probably close to many Scientologists, including Alanna’s other friends and family. Plus, just because Alanna is a Scientologist doesn’t make her a bad influence by default – the religion may be cuckoo, but that doesn’t mean everybody that’s a part of it also off their rocker.

However, when you disregard Hilary’s friendship with Alanna, other things can probably strike you as slightly worrying. For example, Hilary was sporting a fake tattoo at Coachella on her arm, and it reportedly contained several Scientology symbols – including a triangle and the Scientology cross. While the tattoo wasn’t visible at all after a few days, the fact that she was even sporting it might be a cause for concern. Perhaps she never entertained the thought of joining Scientology all these years because of her husband, but after their breakup, maybe she’s decided to take the plunge? She’s clearly comfortable with it if she’s willing to tattoo their symbols onto her body, even temporarily.